These are my next objectives for the second part of the year.

But to begin with, a short report on a couple of running races in which I participated after the MontBell Sea to Summit.

First the Suika-Nagaimo Marathon that took place in Daiei Cho a few kilometers from home (so I could not not participate to it). 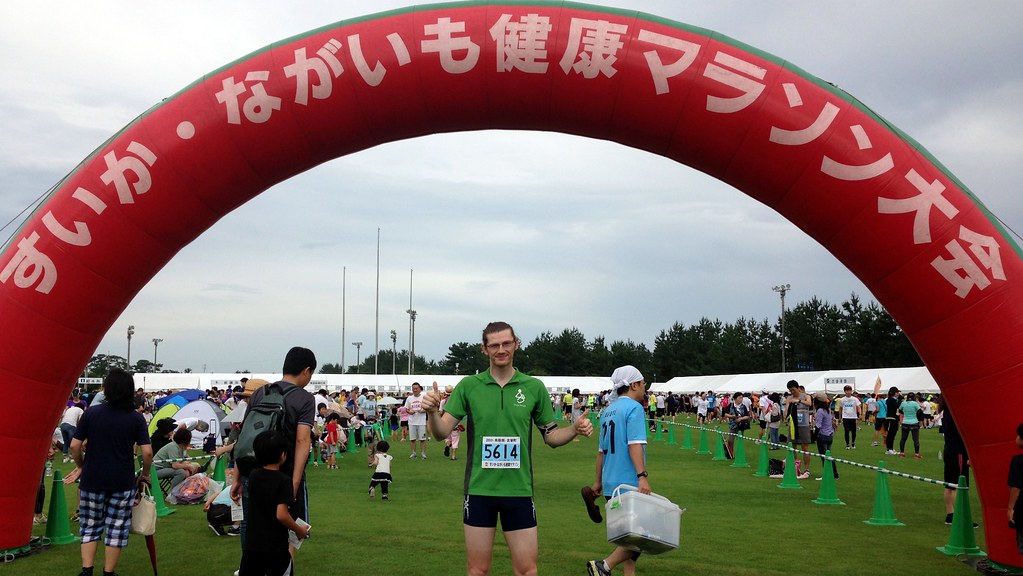 If you are not familiar with Japanese vocabulary, know that here "Marathon" is used for any run race and not only for the real thing. So in fact this one was divided in 3 distances : 3k, 5k and a 10k (the one I ran). Also Suika means Water melon and Nagaimo : long-potatoe. Yes it is a rural race (would be hard to do differently around here :). Taking place on July 7th it was super hot, I mean really. Oh and humid, of course this is Japan summer, nothing weird. Just to say it was far from being optimal for a running race… I did not know the course at all and my secret goal was to run under 42' (even considering the heat). My Viking/Celt body type is not very efficient in the Japanese summer and I was already sweating horribly after my short warm-up… 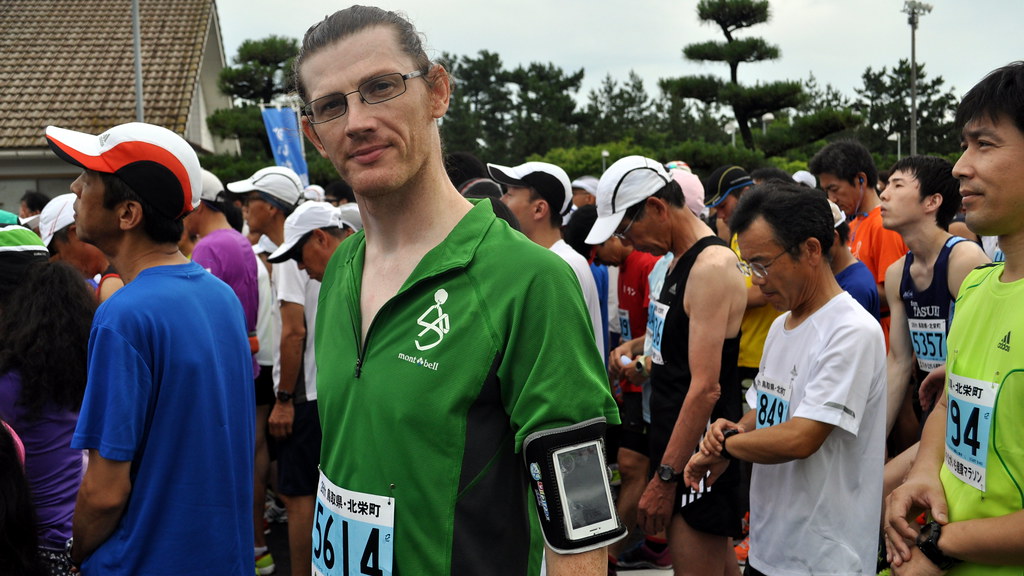 Before the start, I placed about 30m from the starting line in the huge group. The race is very popular with runners coming from far (they must love the all-you-can-eat-watermelon at the finish!). I did not want to start too fast so being behind a lot of people is a good trick : you have to slalom for a kilometer or two between other runners until you reach your level group. If you start ahead you are tempted to follow faster runners and burn out quickly. 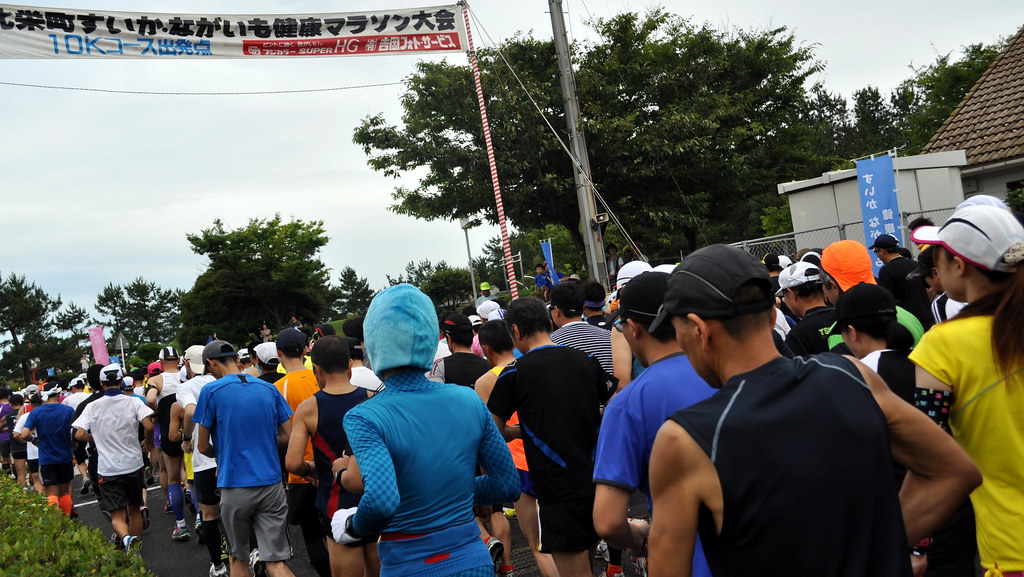 [Few runners cos-played. I don't know how they could survive]

So I ran my first 2k in 8'10" exactly what I wanted. Then a surprise came to me : the course was not flat… Not.at.all. From here it was only up and downs with a good one in the middle. Damn. I managed it quite ok until the 6k and also I could see the thousands runners behind me at the u-turn (a relative bonus :-). 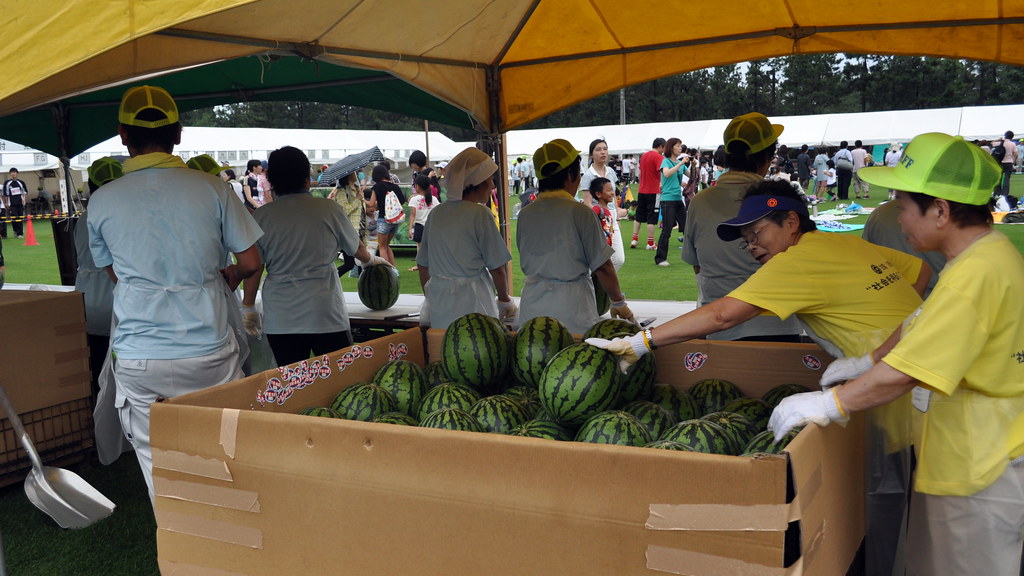 [The watermelons eat-all-you-can waiting for finishers]

Then it was all downhill, not the course but my pace :) I really got in trouble in the last 2k, the heat was killing me and I have never felt so bad at any finish of any races I've done before, including full marathons and middle distance triathlon. And that was just a 10k… glurps. 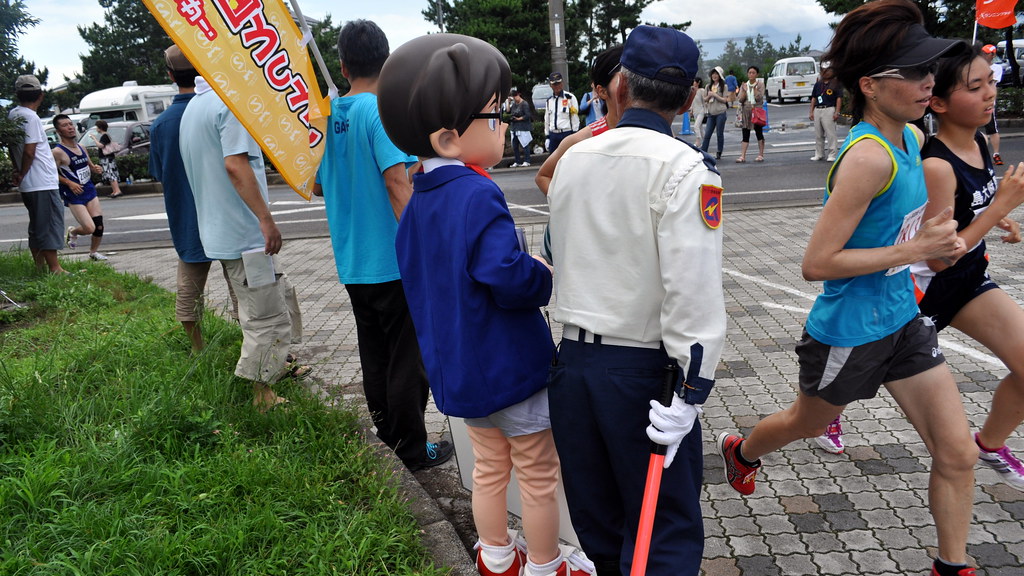 Matter of a fact I was not the only one in trouble and 9 runners had to be driven to the hospital… not very fun. It seems nobody had serious damage though. Thankfully. 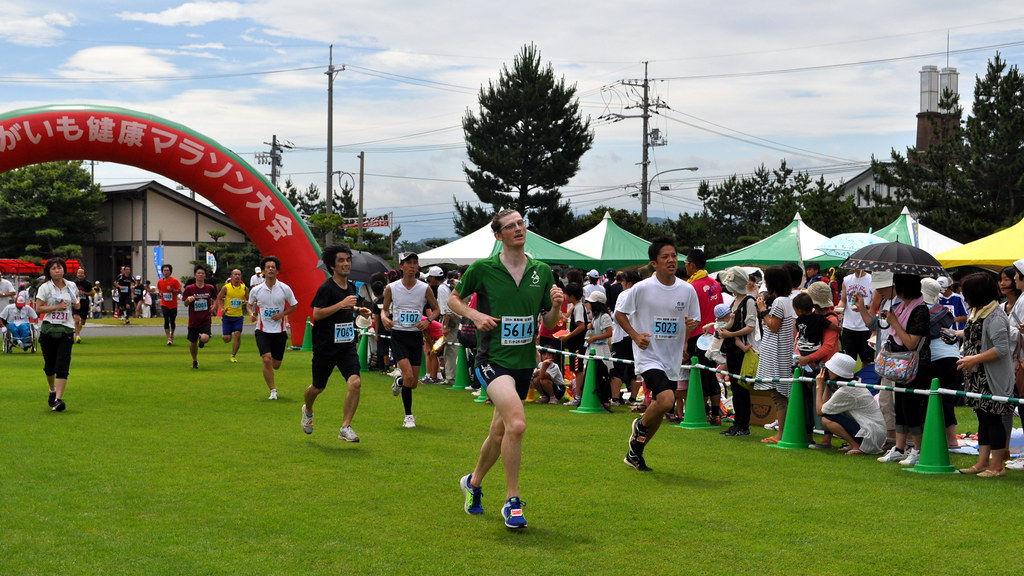 [You can't see it, but I was glad to finish]

Profile of the race : 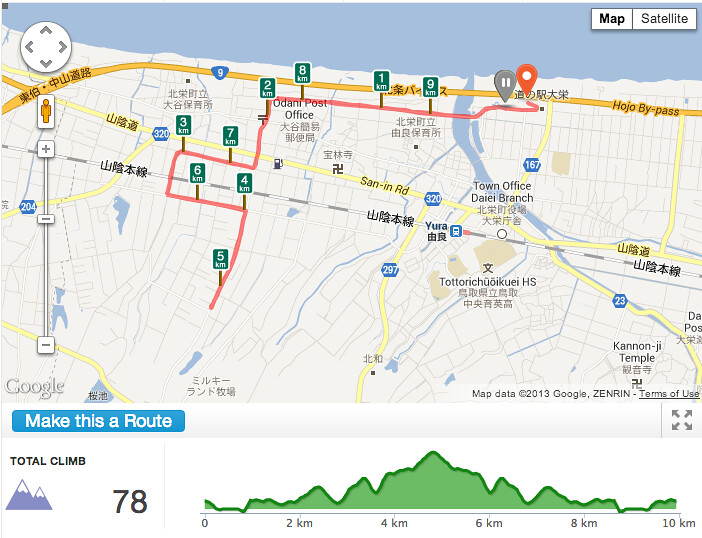 A couple of week or so after I ran for my 'cho' (=city , but more a collection of villages) in an inter-city sports event. Think a mini-mini-olympic with athleticism, Basket-ball, Base-ball competitions etc… 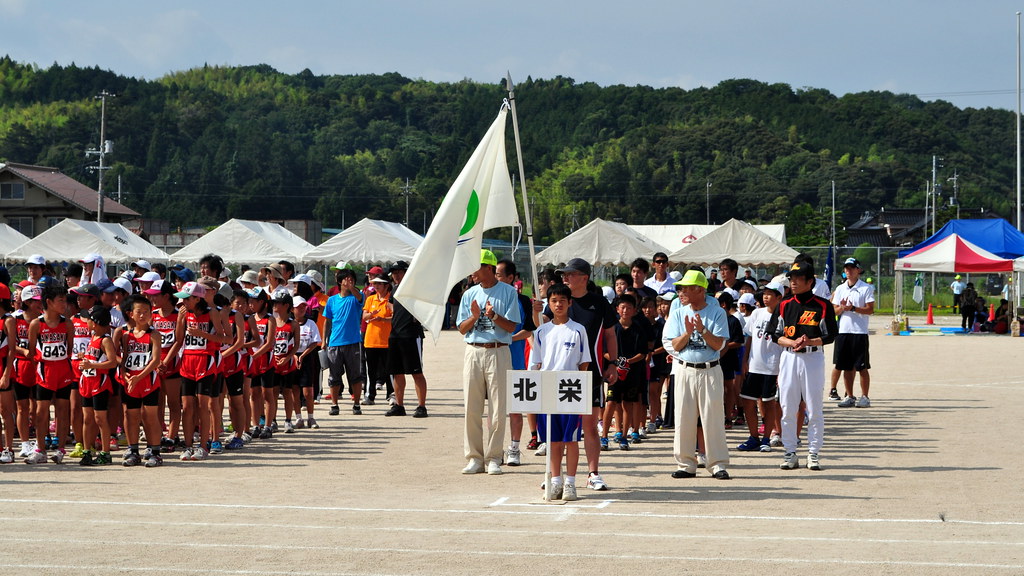 [Participants were from all ages, ceremony was very serious, always this martial touch in official things in Japan]

I ran a 800m followed by a 3000m less than 30' after and to finish a relay race where I ran 200m. Again it was super hot and sadly with not too many participants but that was a good training for me even if I finished 6/6 of the 3000m :-)
Well, one way to improve is to run/train with faster runners (in some limits). 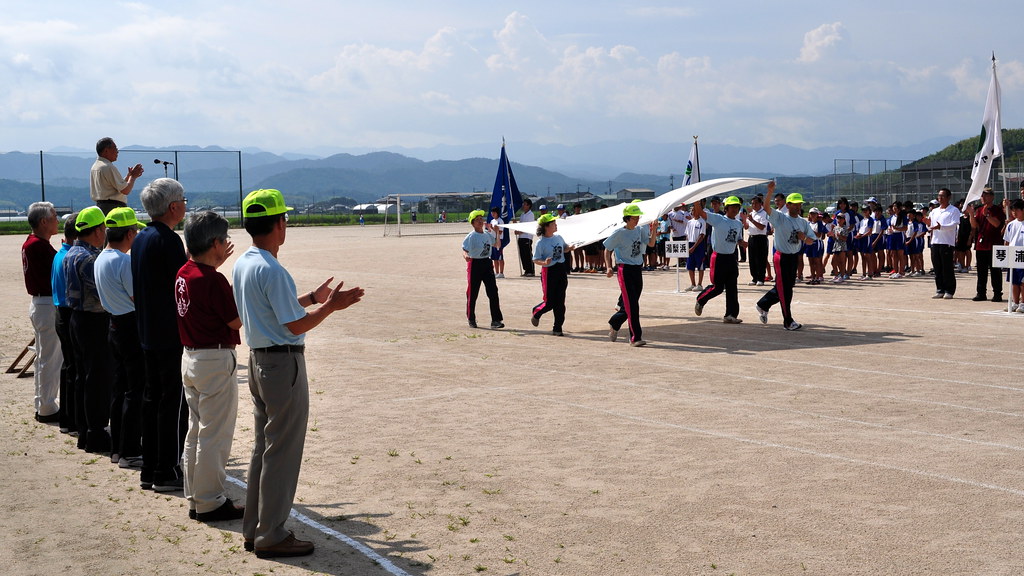 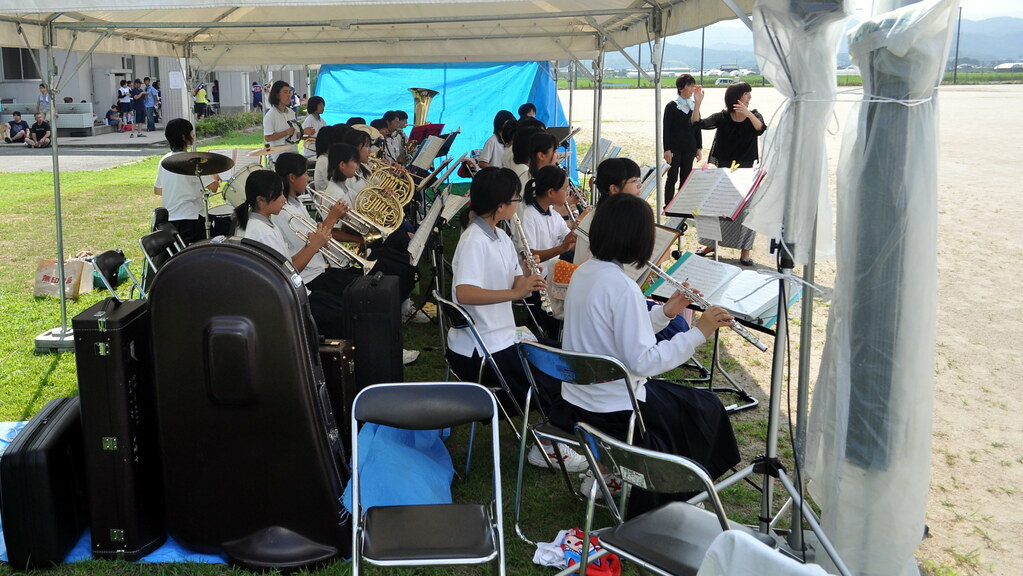 It took me a while to realize the music was live and not from a record... -_-; 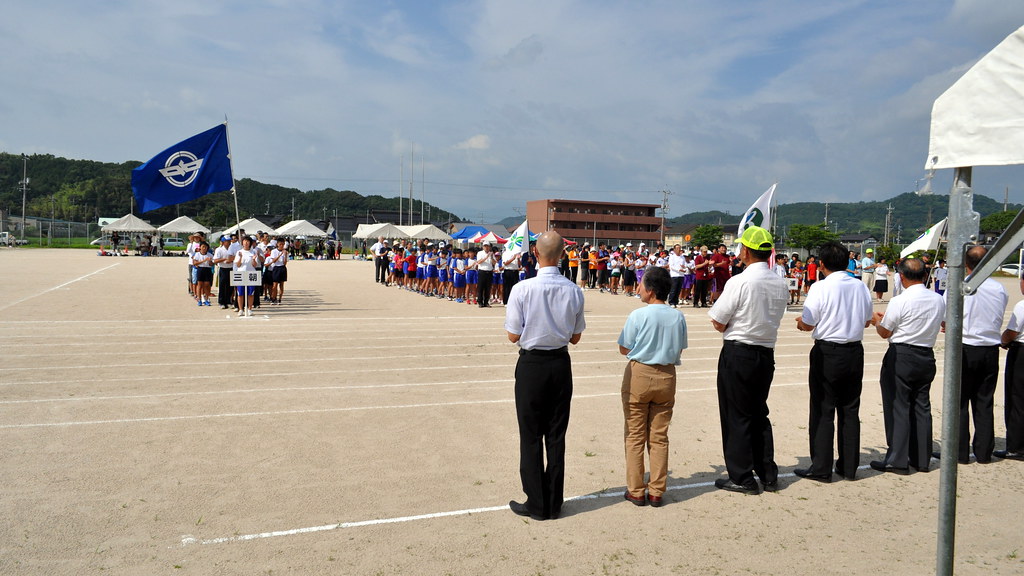 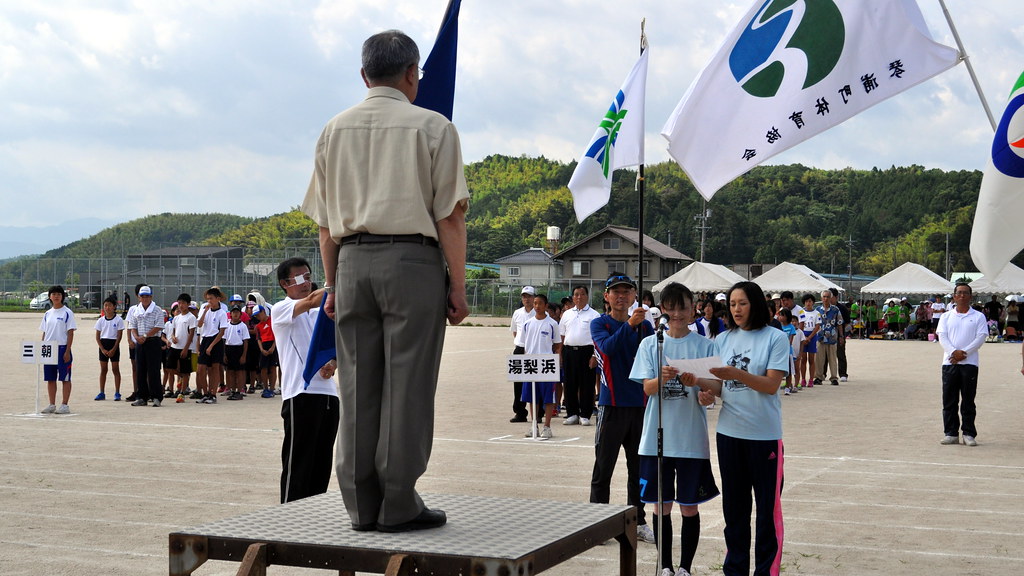 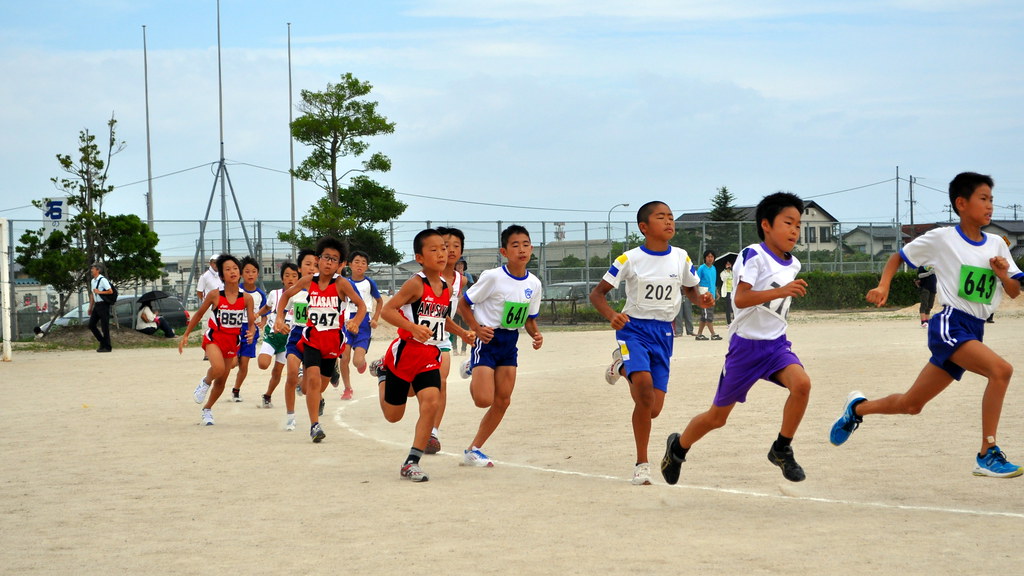 [Kids were amazing during races, they really gave it all]

About my next objectives from now on :

- First with the Hokuei Cho Ekiden team : if you don't know "Ekiden", it is a running race in relay. It is super popular in Japan and the famous races are broadcasted live on TV, even for high-school students races. The level is quite high as Japan has a lot of fast runners from 5k to marathon. So I am training now with the Hokuei Cho team to prepare some Ekiden races in fall/winter. I've done one last year but with a minimal training. I am taking it more seriously this time. Also as I said training with faster guys on a track is good. First Ekiden is on September 15th, I will have to run 7.8k.

- Then on September 29th I will race at the Kasai Olympic Distance Triathlon. It's in the Hyogo prefecture. That will be a first there for me. Hopefully at this time of the year the temperature should be cooler and nice for a triathlon.

- On October 6th will be the Daisen Cycling Hill-climb race. I already participated twice and am looking forward to it.

- And a half-marathon on November 3rd in Yasugi City in Shimane prefecture just at the west of Tottori prefecture. Can I dream of a sub 1:30 ? That's going to be tough :-)