I live somewhere else I live in Yokohama

What is this strange title?

I am just stealing and adapting the last slogan of the new PR campaign of my birthplace, Le Havre (Normandy, France) :

"I live somewhere else, I live in Le Havre"

This campaign started few days ago and is broadcasted on national media. The goal is to refresh the image of the city. How many people looked at me sadly when I told them I was coming from Le Havre (especially when I was living on the french riviera...).
The reputation of a sad and gray city was quite justified in the past but it changed a lot for the last 15 years. It is a nice city now.
So I guess the leaders of Le Havre decided to invest (a lot) to make that known to everyone in France!

The campaign is based on a cool clip (3D stuff) and a website to present the city in details.
Watching the clip, two things caught my attention : the city is changing fast and I found lots of common points with my current location, Yokohama.

The city is changing fast : yes , I did not come back home for 2 years now and the last renewal projects, especially the old warehouse's renewal and the building of the brand new olympic size swimming-pool, were all only plans when I left for Japan.

To follow the evolution of the city I check from time to time some photo-blogs like objectif.canalblog.com or lehavre.canalblog.com/.

The new pool seems really great. By the way I've seen a picture of it in a japanese magazine recently. An article about the last architects creations in the world. The swimming-pool by Jean Nouvel was in a good place. 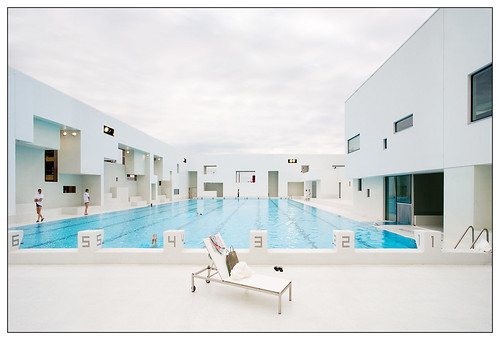 [This is the photo seen in the magazine, it belongs to this set on flickr, art work by photographer Clément Guillaume. ]

It's not the first time I read an article about Le Havre in a japanese magazine. One was during my first trip, an article introducing the city which was just selected to become a UNESCO World Heritage.

There are some bridges between le Havre and Japan :

First the port is twinned to the port of Osaka. The universities are as well "sisters". I followed the japanese class during two years at le Havre University to pass a 2 years degree called DULCO. I prepared it in the ILCO department. (ILCO stands for "Institut de Langues et Civilisations Orientales" : Languages and Eastern Civilizations Institut. DULCO stands for Diplome Universitaire de Langues et Civilisations Orientales ... I think you got it)

There is a Franco-Japanese association in Le Havre : the well-named Minato (meaning Port). Visiting their homepage I discovered the art of Albert Brenet from Le Havre. He was a painter for the navy and during a trip to Japan in 1952, produced a serie about everyday life and theater as subjects.

One guy from Le Havre who did well in Japan (really huge in Japan:), is an other JérÃ´me, JérÃ´me Le Banner, K1 star and now also actor. He fought many times in Japan and in Yokohama. I met him in Le Havre 3 years ago as I was guiding some students from Osaka, they could not believe it : JérÃ´me saluted them with a "Genki ?" (How do you do?) and accepted for the photo with them. Nice guy.

Finally an other link between Le Havre and Japan : me *_* (Must be other ones but hey...whatever!)

I did not think about such a link before but it is kind of obvious!

Both of the cities where "ground-zero-ed" during the end of the WWII. In september 1944 for Le Havre and in 1945 for Yokohama. Thousends of victims for the two cities.
Then they became also bases for the american soldiers in the after war years. They are still here but the Yokohama base was relocated few miles away in Yokosuka.

Both of cities are ports. Yokohama is second in Japan for container shipping (28th in the world) and Le Havre is first in France in this domain (36th in the world and improving each year).

Today the old docks and warehouse of Le Havre are transformed in shopping center, it is exactly the same here where the warehouse was renewed as shops, restaurants, and art place. It is called Akarenga (èµ¤ãƒ¬ãƒ³ã‚¬ prononced Akalenga), it simply means : "Red Bricks":

As Le Havre developed a "Port 2000" project, Yokohama developed its "Minato Mirai 21" project (Port Futur 21)! If the titles are quite similar, projects were different : enlarging the port for Le Havre, enlarging the city with a new attracting center for Yokohama (with the Landmark Tower, highest in Japan as a main attraction).

Le Havre by Night [photo by Hugo and Mathias : photosdestoits.com ] 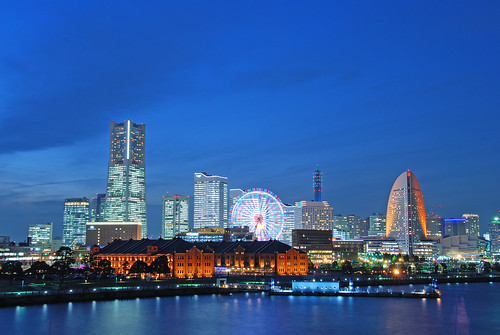 Yokohama Minato Mirai by Night [photo by : Akumach : his flickr]

Also, I have to mention that the 2 football teams le Havre AC and Yokohama FC share the same colors : aqua and navy ! (there's also an other team in Yokohama, the Marinos)

To finish with, I must say that there are major differences between the cities, two just come to my mind :

- Weather. Here the 4 seasons are well defined which makes Japanese people proud ! (even if of course they have nothing to do with that).

Well, I stop here this little portrait, one would not say but it takes some time!

NB : As well as Le Havre welcomed the Royal De Luxe, Yokohama will be the first city in Japan to welcome the last project of the same team :The Machine! I can't wait for it, they always perform great shows. It will be in April 2009. 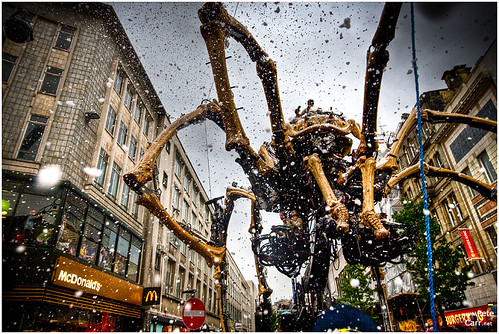 [The Machine in England, photo by petecarr: his flickr]