Ecotourism in Tottori and more

I have not blogged about anything else than my sporty adventures for a long time (but I have been uploading stuff on Instagram or Google+ regularly if you are interested) so this time I am going to talk about a work I am doing in parallel of my developer job. 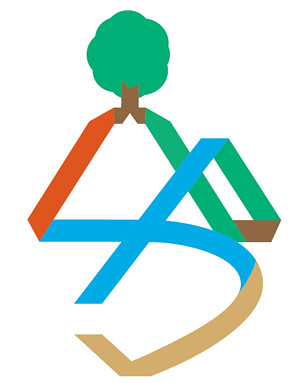 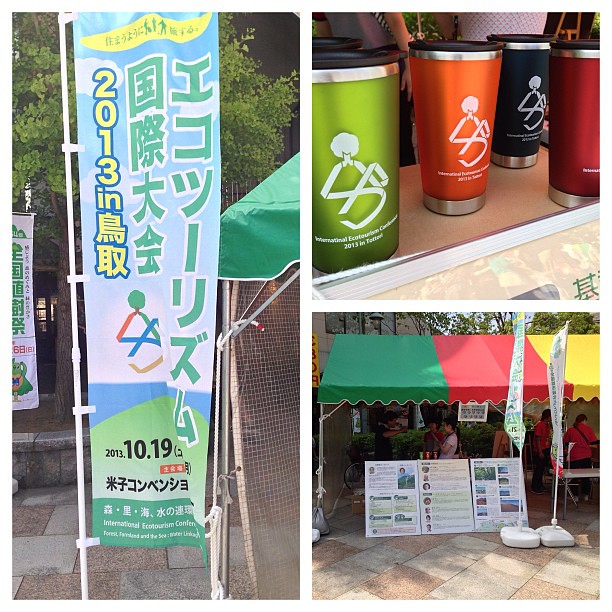 As I said in a previous post I am also working for the Ecotourism Office of Tottori Prefecture as a "content producer". My job is to promote the ecotourism in the area and also prepare with my colleagues for the International Ecotourism Conference that will take place in Tottori on October 2013. Ways of promotion are classic : online with event reports, photography, video production and pushing content through social services, second way is offline : promoting directly to people at specific events, or in the newspapers and even TV (yeah I put TV in offline category…).

Covering a small ceremony in a city hall. 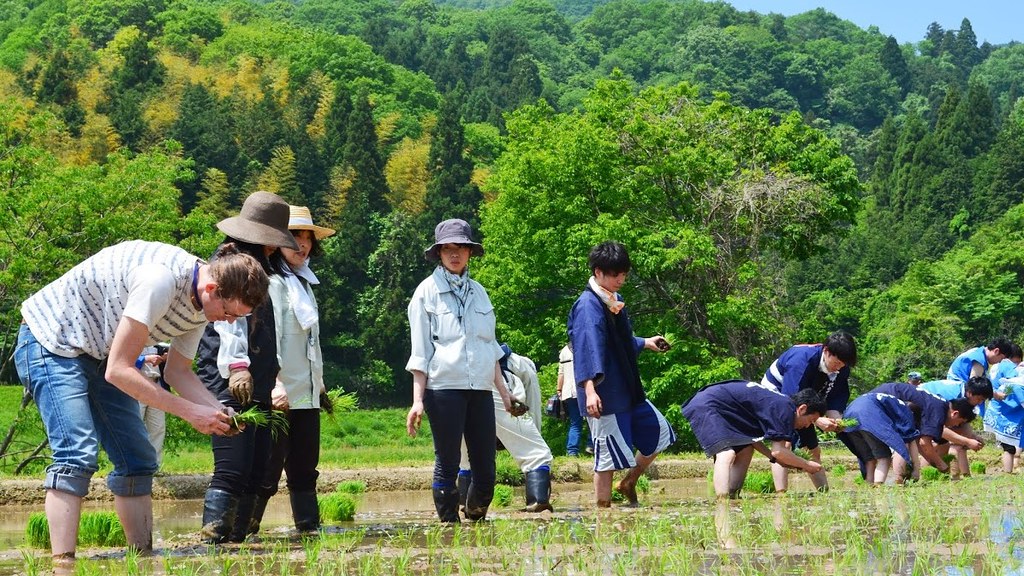 Participating to a Taue : planting rice by hand 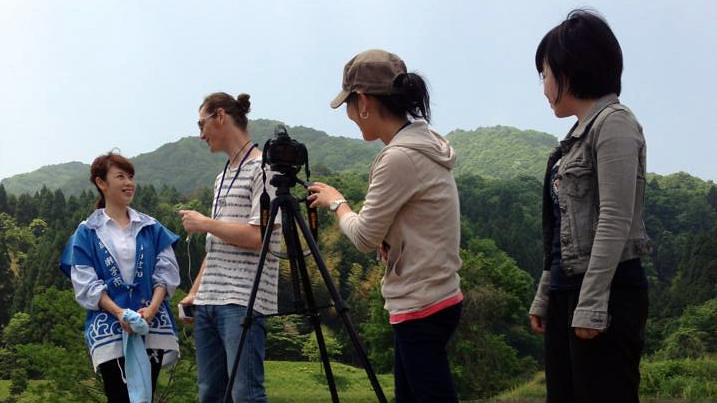 And interviewing at the same event

I started in March and I can say that I had some fun with this job already. Apart from using a bit my developer skills I am mainly using what I have learnt through this blog and my internet regular readings, oh and in some extent my English and Japanese skills.
I am doing some easy stuff on Illustrator [brochure edition for example] and learned about MODX, a CMS, and I am currently redesigning the homepage so I am never far long from the computer. Also I started to build a small mobile app. to guide people to noticeable places.

But what I liked the most for now was to go on the field, shooting videos and editing. I already uploaded a few on our Youtube Channel. I am still learning the basics so it's full of mistakes but hey, one have to start somewhere. The Tintin Reporter in me is very happy. Third video is already much better than the first one (I think).

We don't have any crazy budget for the shootings so we are using our own gear. We are lucky enough that A. San one of my colleagues owns a Nikon 5100 that can shoot 1080 HD (my D5000 is good for pics but not for video). I also bought a tripod and I really wonder why I never did that before for my personal photography use, this is a game changer… Also for interviews and to be sure to have a proper sound I use the iPhone with a recording app. and the headphone's mic. That guarantees to have a pretty good sound, way better than the one from the camera anyway.

That said the prefecture provided me with the latest version of the Mac mini. Very good little machine, I run Photoshop and Illustrator CS6 on it without any problem and do my video editing simply with iMovie for now. I know it's not a professional tool but it's good enough for me at the moment. (The second video on youtube was even shot and edited from my iPhone5 actually because of time constraints).

As we go sometimes to events for shooting and promoting we happen to meet the local media as well, wether TVs or the newspapers. So we are producing our own content but are also the subjects of media sometimes.

I've been myself interviewed in the Asahi newspaper in its Tottori version. A portrait to describe who I am and what I do for the prefecture, basically. 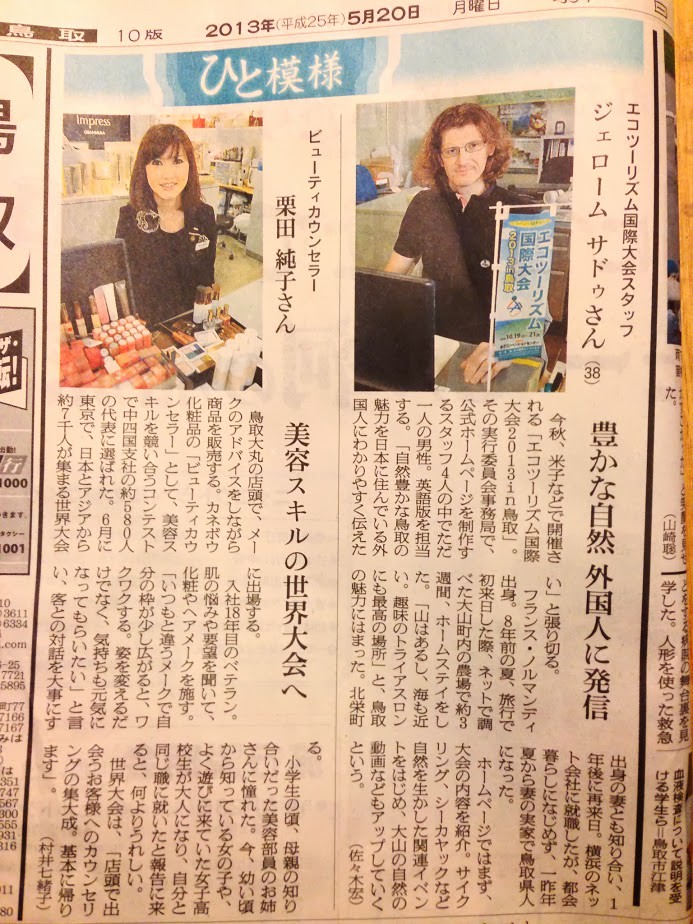 Also we recorded a short CM for the Conference at the local NHK studio in Yonago, that was a fun experience. 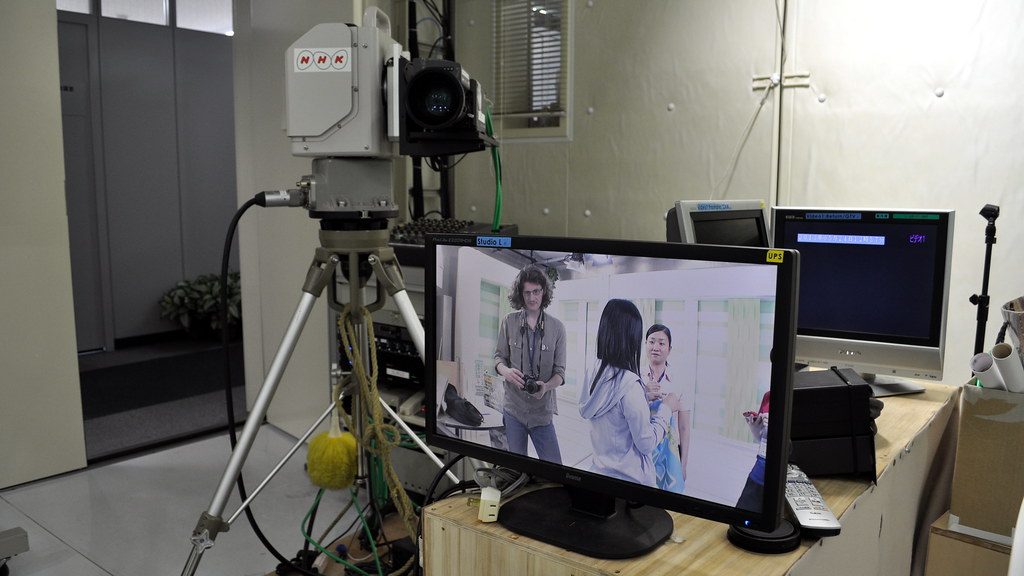 So as you can imagine this work is quite different from what I have been used to. From programming alone in my home-office I am now working again with real people (not only Skype meetings ;-) I kind of forgot this social habit in my work flow so I have a new look on this.

One good thing with this work as I said is the multiple opportunities to go on the field. For example we are testing some eco-tour with some groups of 10 to 20 people, that's a great chance for me too to discover some areas or activities. 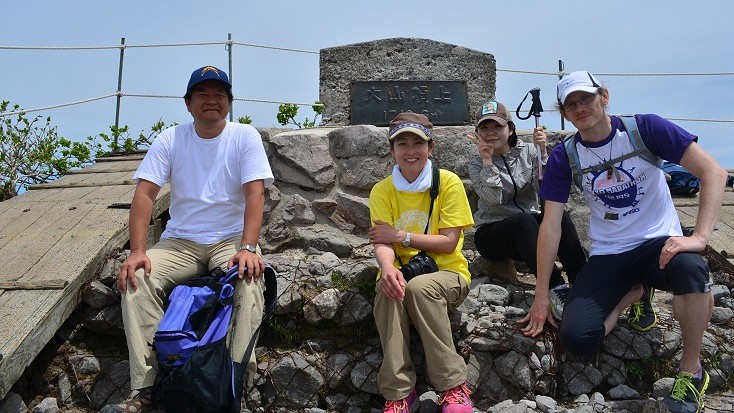 At the top of Mount Daisen.

Cycling downhill in Daisen thanks to Mori no Kuni 森の国 [Amusement park in Daisen]: 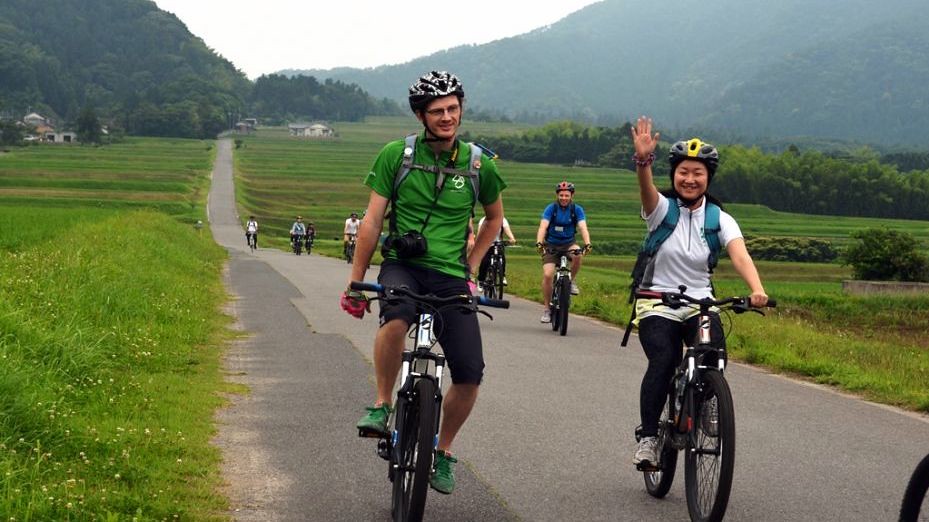 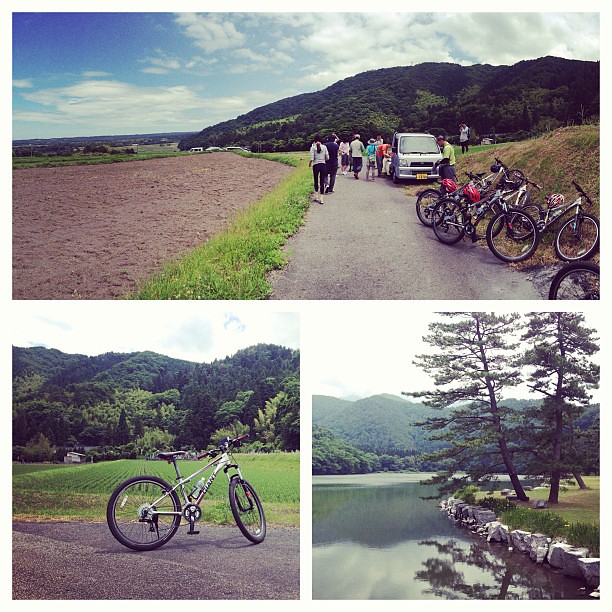 I am still developing at home the rest of the time so my schedule is pretty tight, especially as I try to train for triathlon as much as possible also (that means not so much though)… duh. Even the triathlon training was put to use for the work as I had the chance to participate to the Mont-Bell Sea To Summit in Hokkaido with the Ecotourism Conference team! More on that in an other post soon. 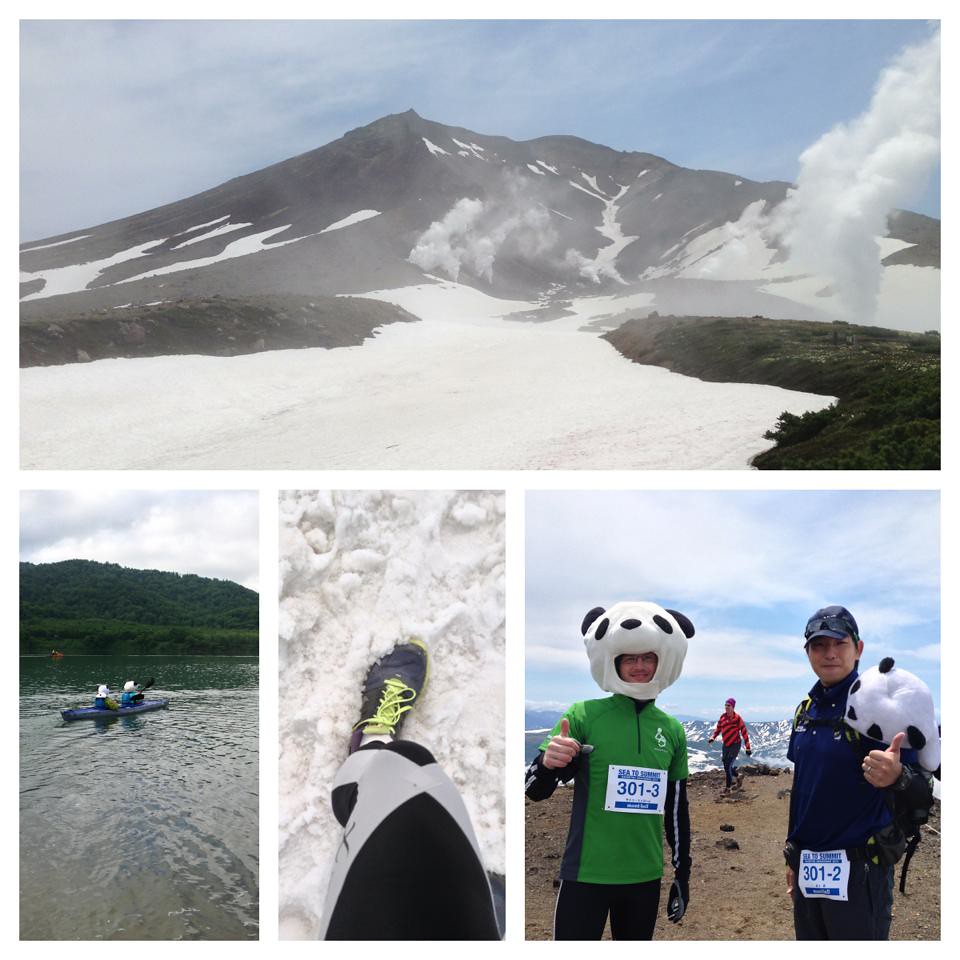 So that is some exciting time (I never had time to get bored since I have been living in Japan I think), the ecotourism job makes me meet a lot of interesting new people around (good for network) and the developer job is also for cool projects : with Tokyo based design studio AQ and the NPO Gadajo. I have been working for Tokyo Art Beat and now also Kansai Art Beat. Also with AQ I've been working on atlist.co a cool mobile/PC web app (on the back-end, re/writing APIs, something that I enjoy as a programmer) to share art events in Tokyo with your friends. But if you are in Tokyo give it a try yourself. This is mainly the work of Alban I must say, I am here as a support developer. 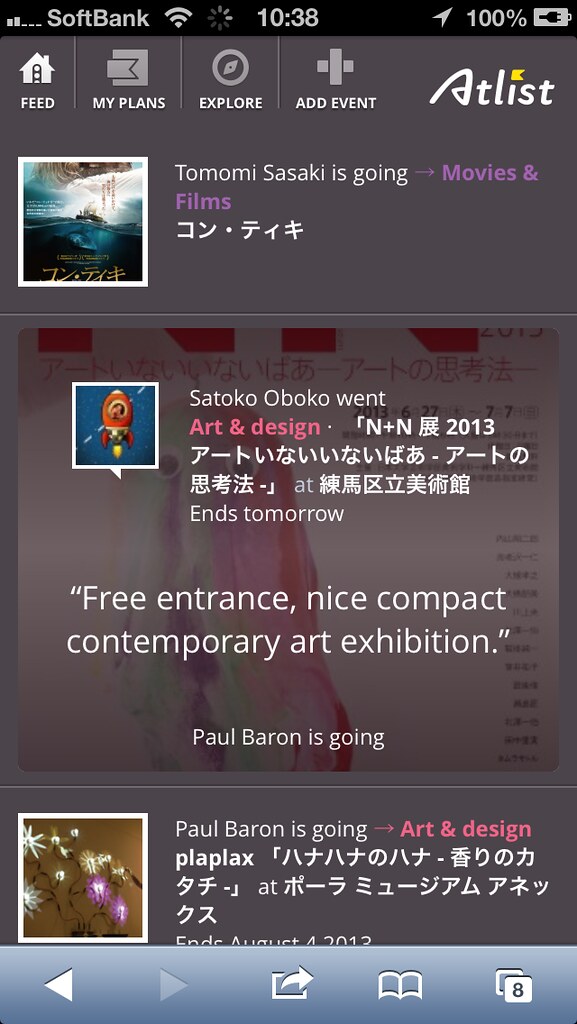 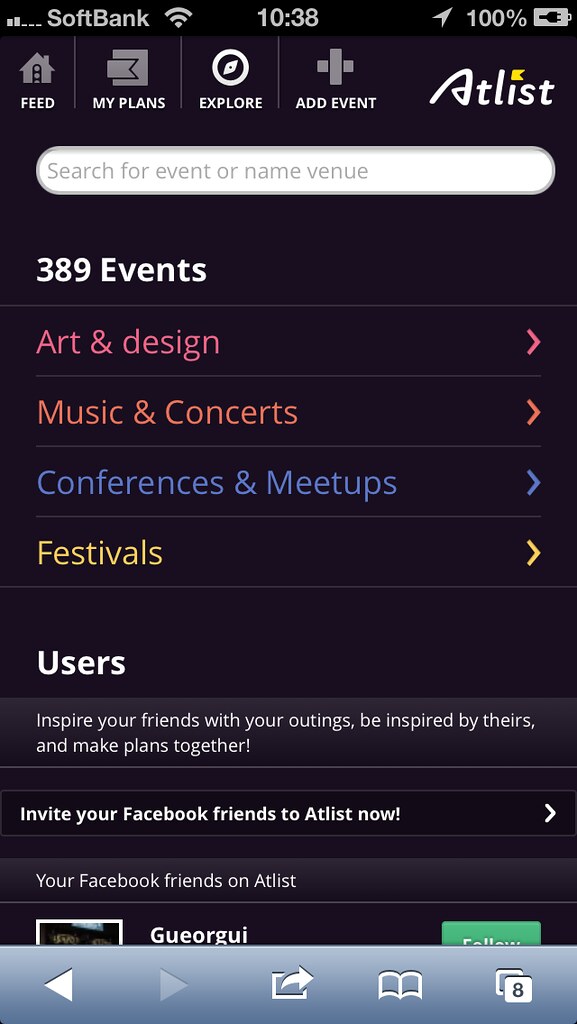 A couple of Atlist.co screenshots

So yeah I am busy but a good busy.

Thanks to my colleagues for the shots where I am on.

Just a note : I added google + comments on my (now old) home made blog cms; that was just 4 lines of javascript to add, almost too easy. Now all comments about an article I'll share on G+ will be here and also showing on the G+ discussion and vice-versa. I like this a lot. Even better it is retro-active and it works for comments that were made on G+ discussion before this feature was released, now these comments done on G+ at the time are also visible on the blog post. That's neat. If you don't have a G+ account you can still comment the "old" way though.