After a little bit more than 3 years at Samurai Factory, I am now working as a freelancer (the ultimate goal is to be able to work from anywhere but that's an other story). I first thought it would be difficult for a gaijin (foreigner) but as long as you have a proper visa it is really easy. It might have been more difficult in my own country ! Even if I am a married guy with a Japanese national I am still holding my engineer visa which is valid until the end of this year. Surely I will switch to a "spouse visa" soon as it opens more business opportunities. Anyway, I am ok for the visa.
Actually all I had to do was to go to the tax office and fill a one cheat document stating that I am now working as a freelancer : Kojin Jigyou å€‹äººäº‹æ¥­ (self-employment).

Then you want to have an insurance, you can go for the national one or a private one. I chose to keep the same that I had with Samurai Factory. It costs me 18000 yens /month to cover myself and my wife. Plus you "must"  pay for a retirement plan. In fact, from what I've understood it is up to you to pay or not (?) but I prefer to pay for it anyway. It costs about 30000 yens for both of us.
Now I have to keep all my receipts for the tax accounting... It is going to be fun... but I should be able that way to save some money on the tax.

That's it for the paper work.

Then you need some jobs to make money! After 3 years here and a regular use of the social networks like twitter or linkedIn I managed to meet (for real) the good people it seems :-)

For my first job I worked with the extremely busy and popular Storm-trooper, Danny Choo, who gave me also some good advices concerning freelancing.  Along with his CTO Chris Gaunt I worked on their CGM platform Mirai Gaia and surely I will do some more jobs with them. One of their latest project with Mirai Gaia is the photo website community for the Japan Times : https://tokyo.japantimes.co.jp/ 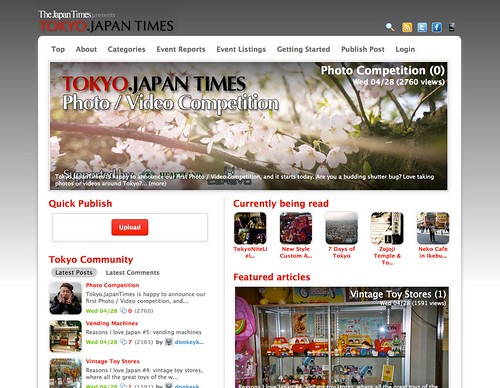 Now, I am at the moment working with UltraSuperNew, for the next three months. UltraSuperNew (USN) is a creative agency based in the heart of the fashionable Tokyo in Harajuku. They work for big names like Audi, Reebok or Red Bull, to quote a few. They also support Pecha Kucha. It is a very multicultural company directed by Marc Wesseling, Michael Sheetal and Tomo Murakami. 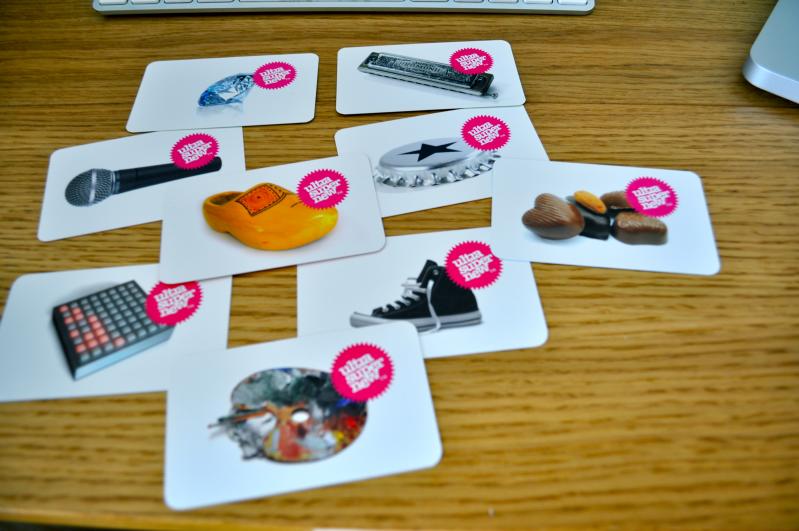 Some name card I received from the USN members.

I got myself a pack of "temporary staff" name cards. Nice touch :) 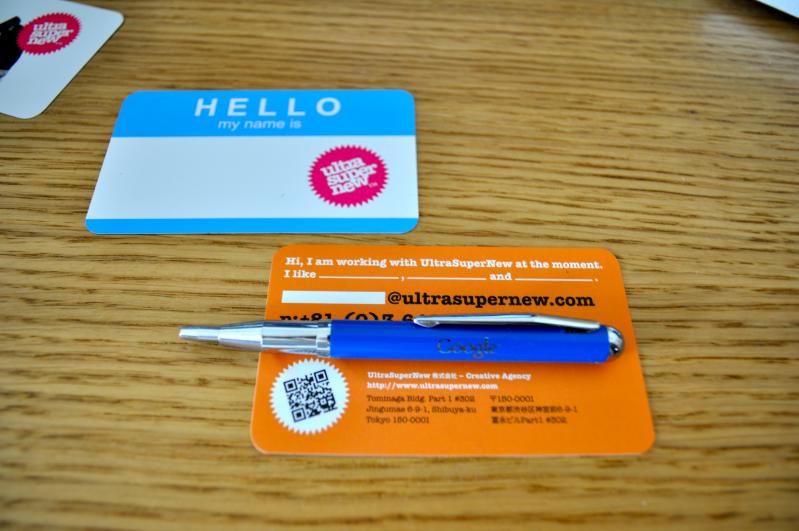 I am working with their CTO, Alban on a project for Red Bull. It is kind of funny that I shot the following video few months ago (it is almost a mini Red Bull CM...) and now I am working for them.

BMX at Tokyo Cycle Mode 2009 from Jerome Sadou on Vimeo.

That said my job won't be as crazy as this guy :

... but as a web developer the task I've been asked is challenging and plus it is much safer :-) [If my Mac does not explode I should be ok!].

Finally, I have also some side projects to come, so I am pretty busy right now... which is good!

Talking about Mac, being now a freelancer I was in a terrible need for a new machine. As in my previous jobs I was working on the company's computers my set at home did not evolved that much. My latest machine was a 15" powerbook G4 (last generation) that my brother gave me!(In exchange I gave him my triathlon bike that stayed in France...). So I patiently waited about two months for the new line of MacBook Pro to be released and I am now the happy owner of a 15", i5, Hi Res anti-glare Mac Book Pro. 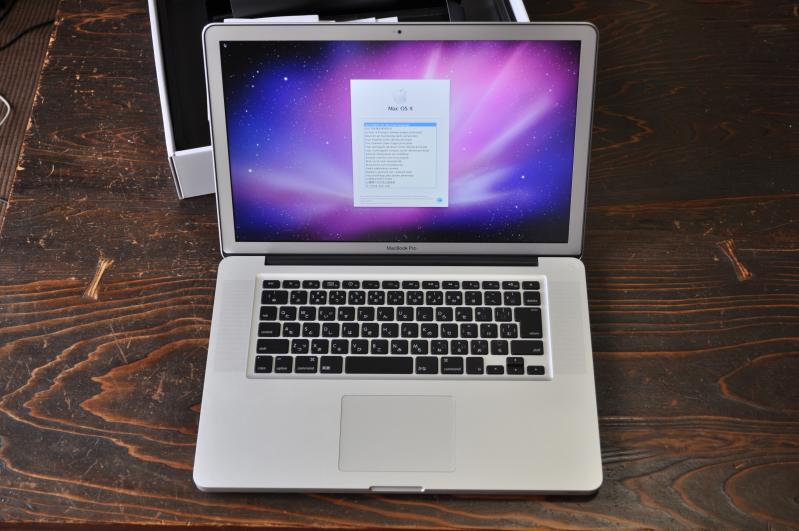 Without any surprise as you can guess it is a totally new user experience compared to the G4 :-)
I first wanted to buy a 13" as I am always working with a secondary screen but this time the 13" were not upgraded to the i5 processor, so it might be for the next time... unless I got addicted to the Hi Res screen. 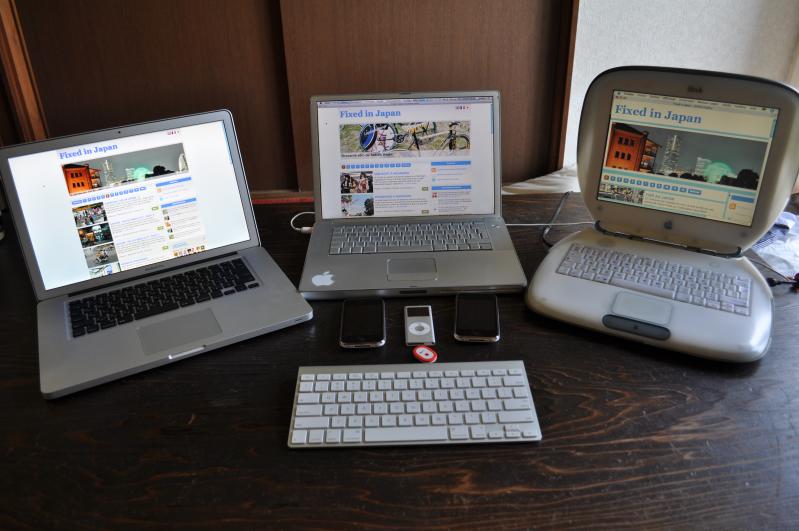 I thought it was a good time for an Apple family shot...


PS : the title of this post is quite of a SEO stunt, I wonder how it will do ...
PS2 : and yes Red Bull provides free cans to UltraSuperNew :) 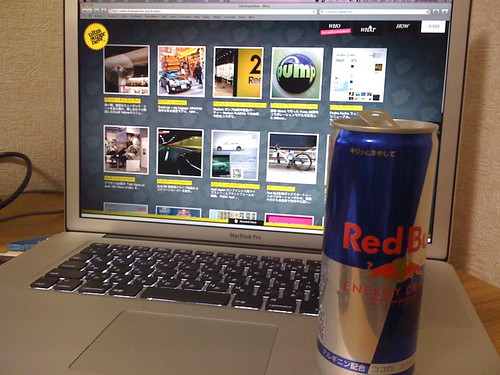 <-CP+ Camera and Girls Show in Yokohama   Fixed in Japan->