Wow wow wow... Already the 14th of January. Veeeery slow start for the blog this year, sorry for that, as an excuse I will use the famous one : "I was busy" if you don't mind. So, well, it is kind of late for that but I wish you all an Happy New Year and thank you for stopping by! 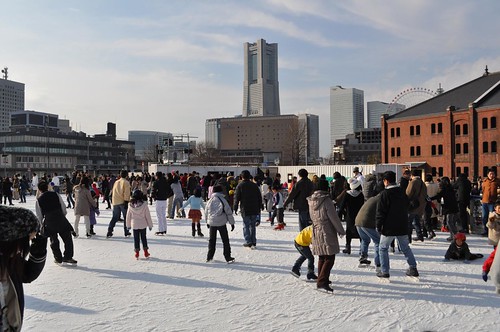 [Ice skating park in Yokohama, no ,no snow here for now, anyway it is quite unexpected]

2009 has been quite awesome for me : I got married and the ceremony in November was incredible with my parents coming to Japan, imagine, it was their first trip by plane! I will never forget these 3 weeks.

Then most of the good things that happened during this year were linked to the two things that kept me busy (apart from my job) : bicycles and this present blog.

I am really happy that from my "online life" through the blog and twitter emerge some interesting meetings in my "real life".

For example, blogging and tweeting allowed me to meet Danny Choo the now world famous stormtrooper, blogger and entrepreneur. Thanks to the event he organized along with Andrew Shuttleworth, the CGM Night, I happened to meet some of the people I was already following on twitter and also new ones.

Meeting all this people from different horizons was really interesting and motivating. Twitter is a great tool but it depends entirely on you to make it useful or not.

To make the blog more interesting I also invest some money in a real camera, the Nikon D5000 and along with my fixed gear bike it is definitely my best investment this year ! (well the wedding ceremony apart ;-)

Being a total newbie to the world of DSLR I am really glad of my choice, I quickly was able to produce some image "show-able" and people seemed to like some of my shots too :
my photo article "Everyday Life from Japan 4" in July was featured on the top page of Stumbleupon.com during almost two weeks, bringing ten thousands of new visitors.

More recently "Everyday Life from Japan 7" has also been visited by more than 30000 readers. Other articles did pretty well also. This is encouraging.

To finish with my blog and twitter, it allowed me to shoot pictures of the the Cycle Mode event for the online version of Wallpaper* magazine. It was thanks to Gordon, a journalist based in Tokyo. I really would like to cover more events like this for media.

Also Danny Choo offered me to be a Live Blogger for dannychoo.com and I accepted with pleasure. My "most popular" note for now is "Learning Japanese Through Manga" with something like 10000 views! Not bad for an iPhone shots with 3 lines of comment : this is Danny's power :) 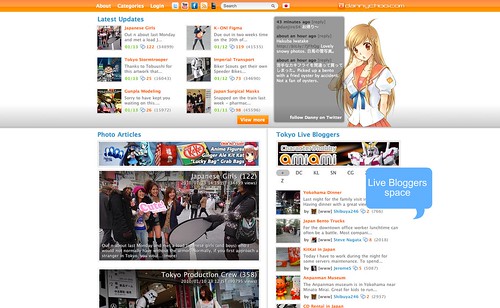 Blogging about what you like is the most important, for me right now I focused mainly on fixed gear bikes and Japan (with some exceptions like my company trip in Viet Nam or some "sneakers" articles for example). I am aware that with two subjects being so different from each other it would be difficult to "grow an audience". But I am okay with it, I don't mind so much. 2010 may be the year I would enlarge my variety of subjects though (yes, I have other interests and stuff I want ot share :)

I really like my Fuji bike, it was definitely a good choice in this price range

Of course I'd like to build a nice ride from a NJS keirin frame for example, but it is not a priority now ( I am talking money here...). Maybe I should look for sponsors :)
(by the way my review of the fuji is now on the top results of google when you search for "Fuji Feather" (name of the model) as well as searches like "fixed gear Tokyo" and many others ...).

Maybe 2010 will be also my come-back on road race training but it still depends on many things... I crashed at the beginning of 2009 and hurt again recently my left arm, so I have to heal this first.

NB : in case you did not notice, it is now possible to comment by just signing in with a twitter account instead of filling the form each time.