Good news : I am officially a triathlete again.

Bad news : That was my worst time ever :-)
But not worst ranking though. [See all results here] 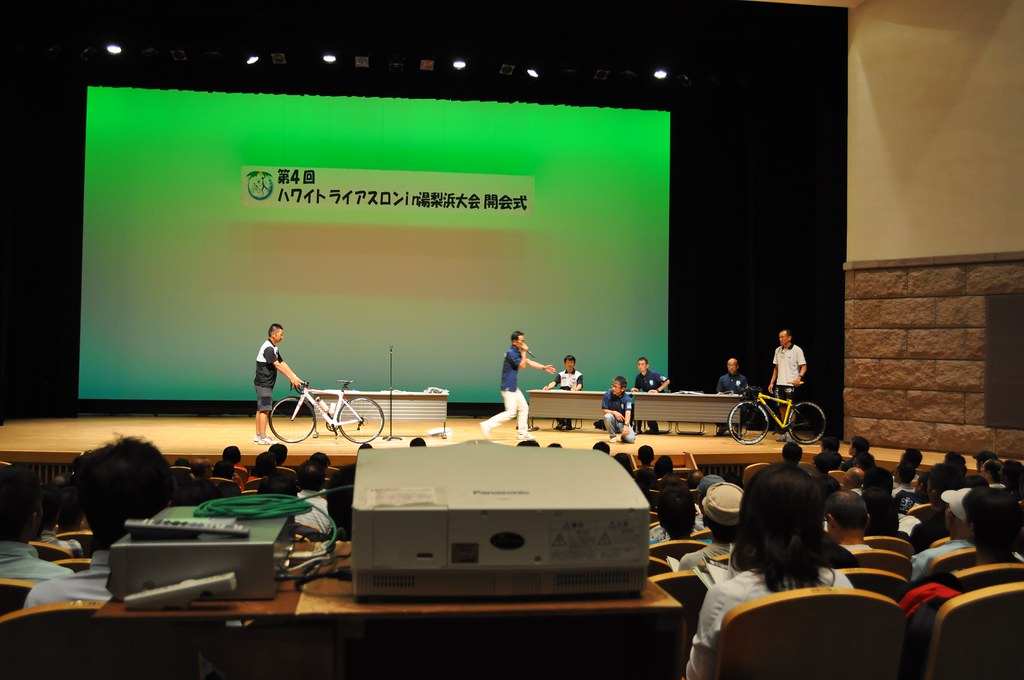 [On Saturday, pre race day meeting, with a reminder of applied rules, like the no-drafting rule.] 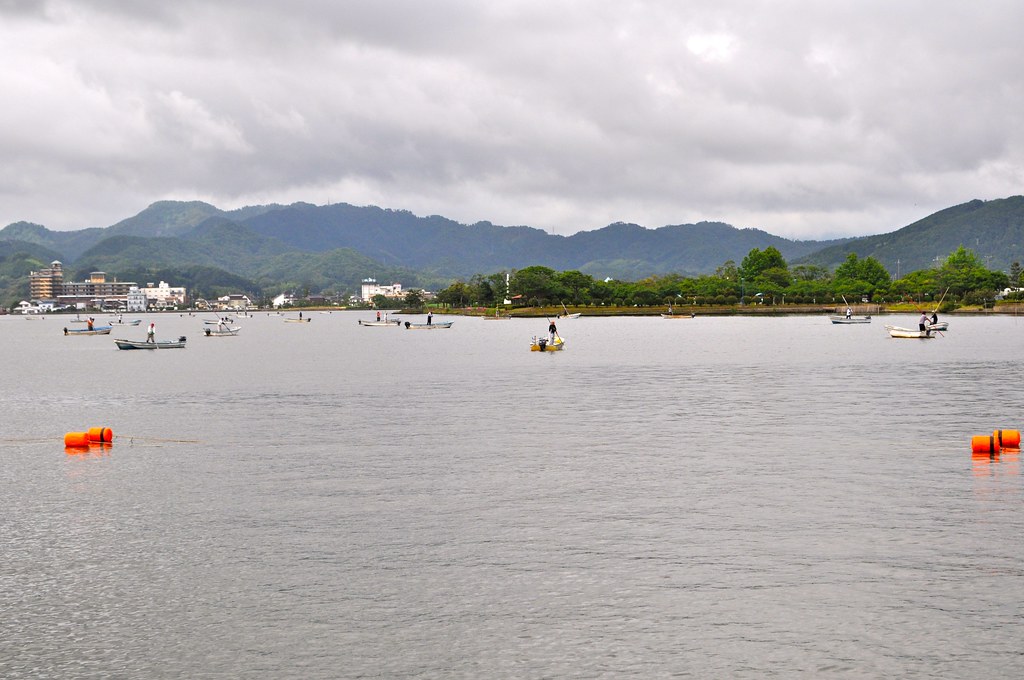 That was my first triathlon since 2005 when my personal best was 2:14.
Hawai (note the difference with Hawaii ;-) Triathlon takes place in and around Togo Lake just 8km from where I live, I know the bike and run courses perfectly. That was helping for sure as I could manage well my bike. 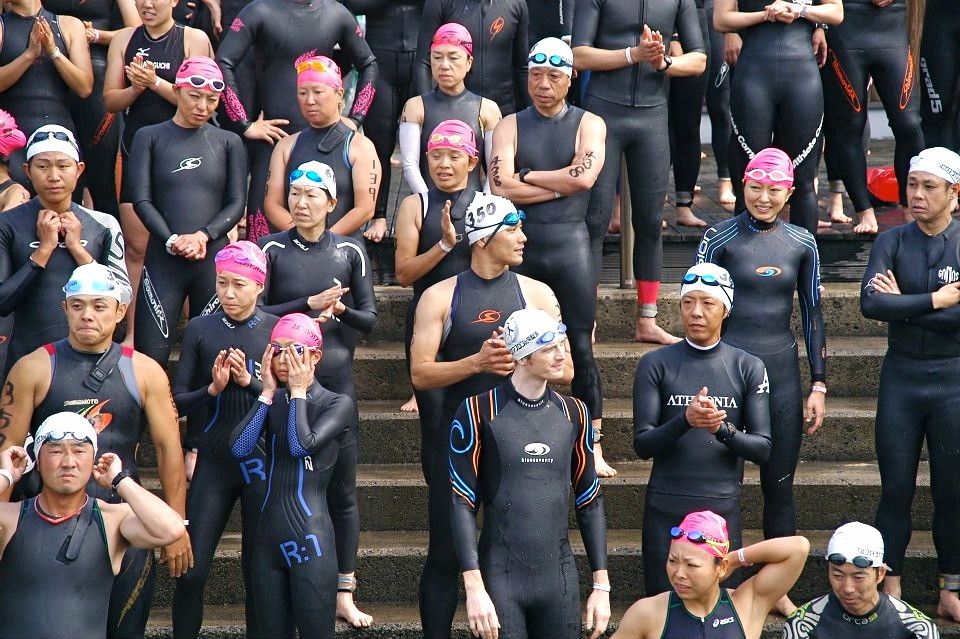 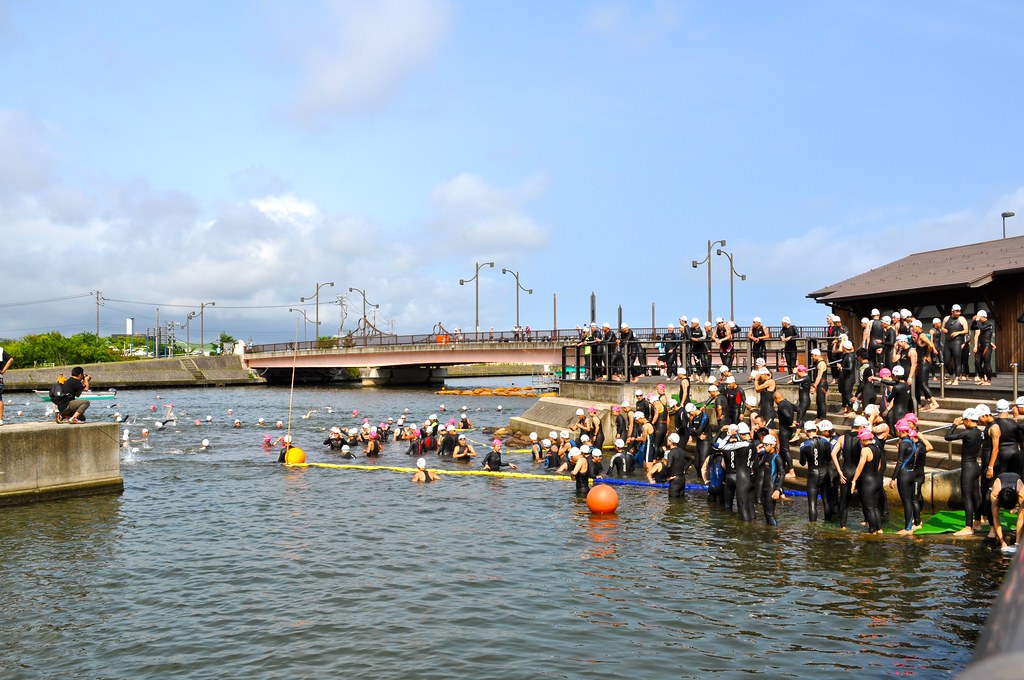 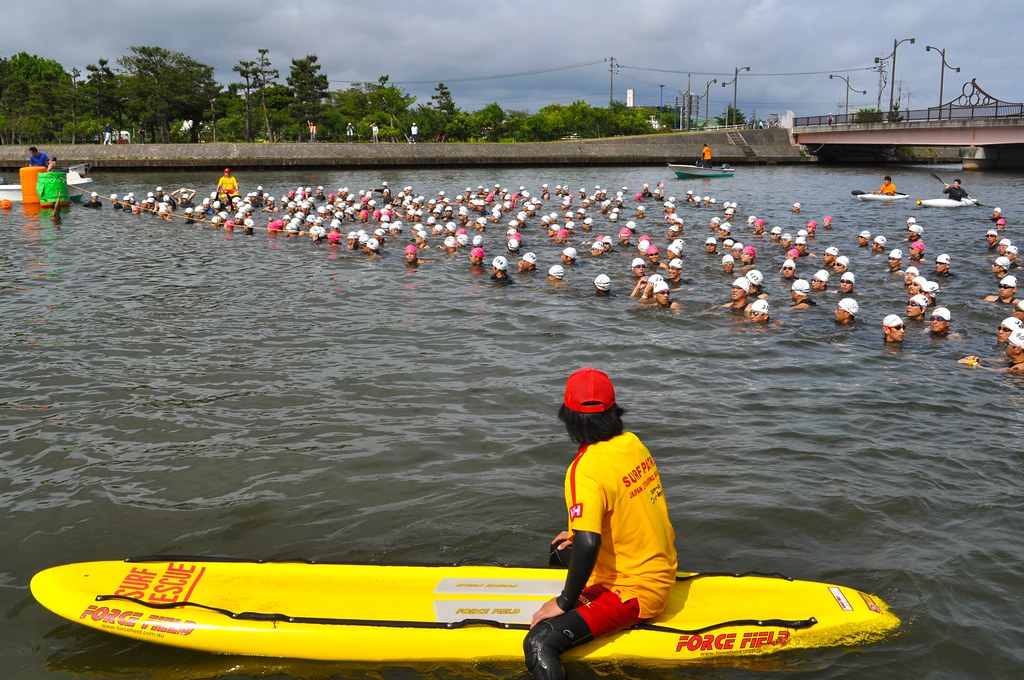 Tension at its maximum. 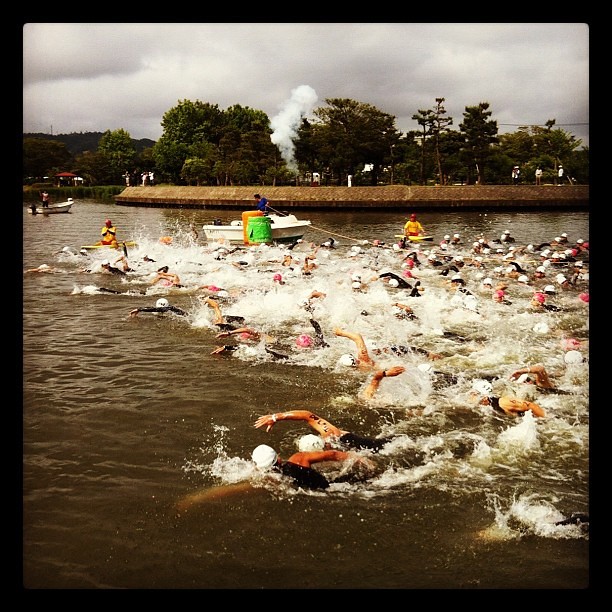 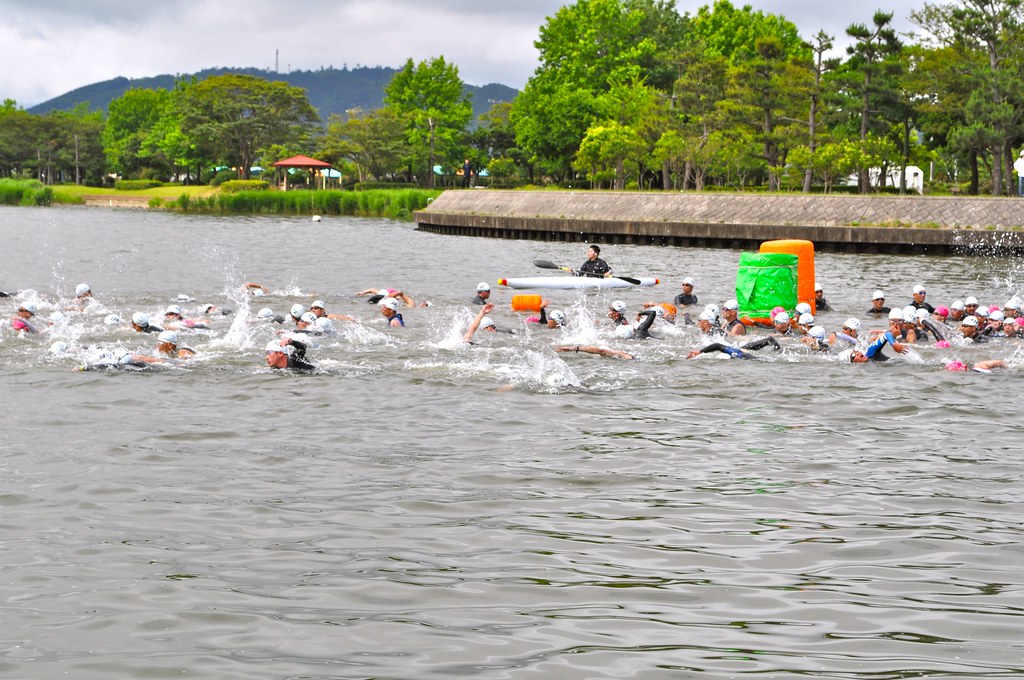 So how it went ?
Swim : 28'27"
I was expecting to swim something like 25 minutes considering my latest trainings. Unfortunately, the lake is not deep. We almost can stand at any time. So it was hard to escape from the pack as we were kind of glued all together. Looking at the swim result I think 75% of the bunch was between 28 and 31'… That's not normal.
I really could not swim properly more than 25m in a row, always disturbed by other swimmers. 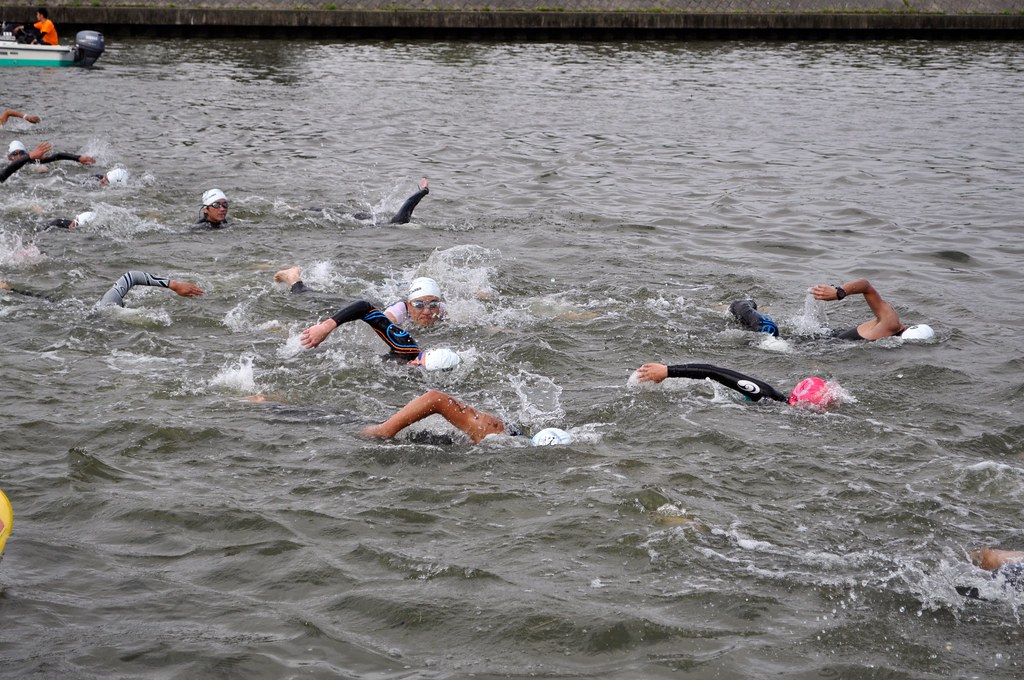 This is my arm in the middle with orange and blue lines. And a predator in my back :-) 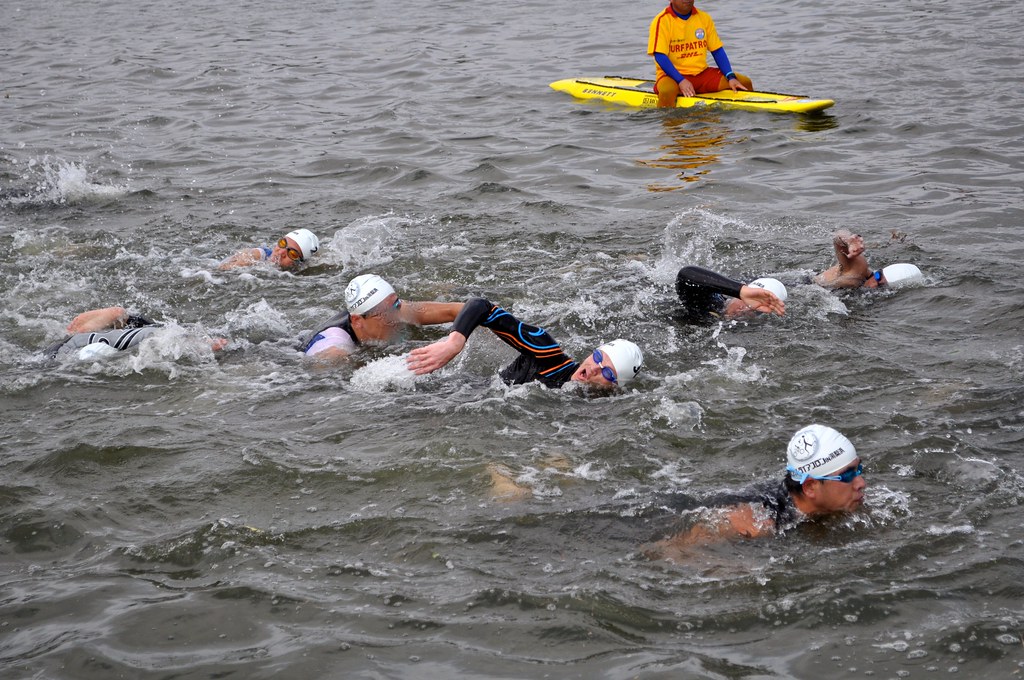 This illustrates my swim until the end, the feeling to have someone on my back most of it :-)
No offense but Mister behind me, you should not be here on my legs and on behind swimmer's head!
I don't want to make a rule of a one time experience but from what I lived it was less about swimming than kicking the others… I swam in rivers, lakes and sea in France… I never experienced that… One more good reason to improve dramatically my swim.
Or maybe I should add jujitsu to my training :-)
After the swim I was ranked 64/305. 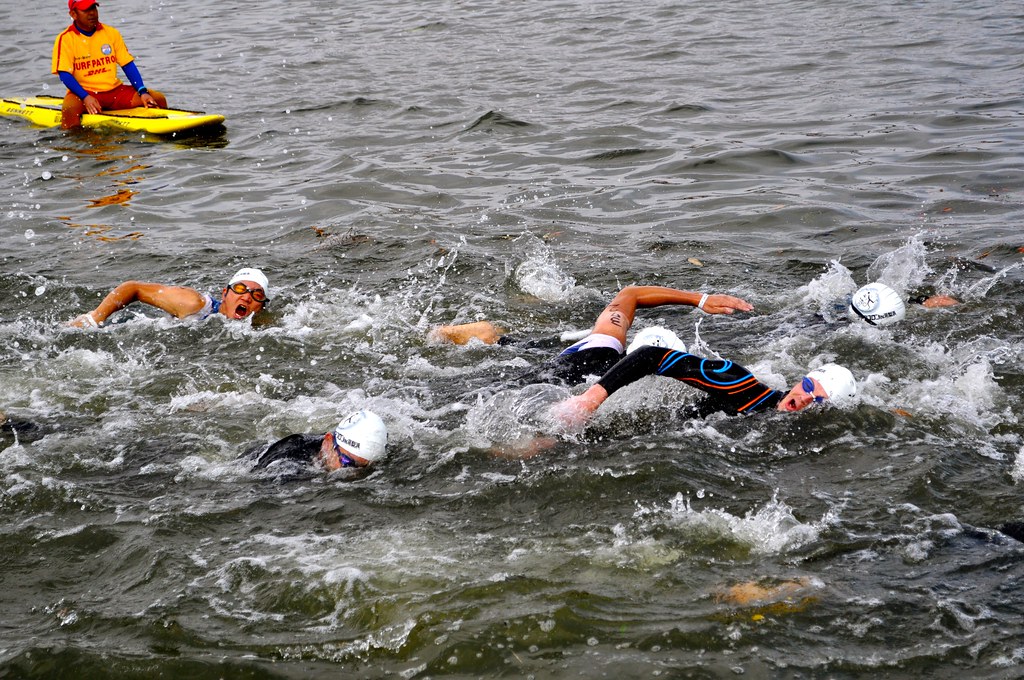 T1 : about 200m from the swim. Judges asked me to put my wetsuit properly in my bag. I obeyed. This is one of small rules that differ from France [at least from 7 years ago…]. T1 took me probably something like 2'30" 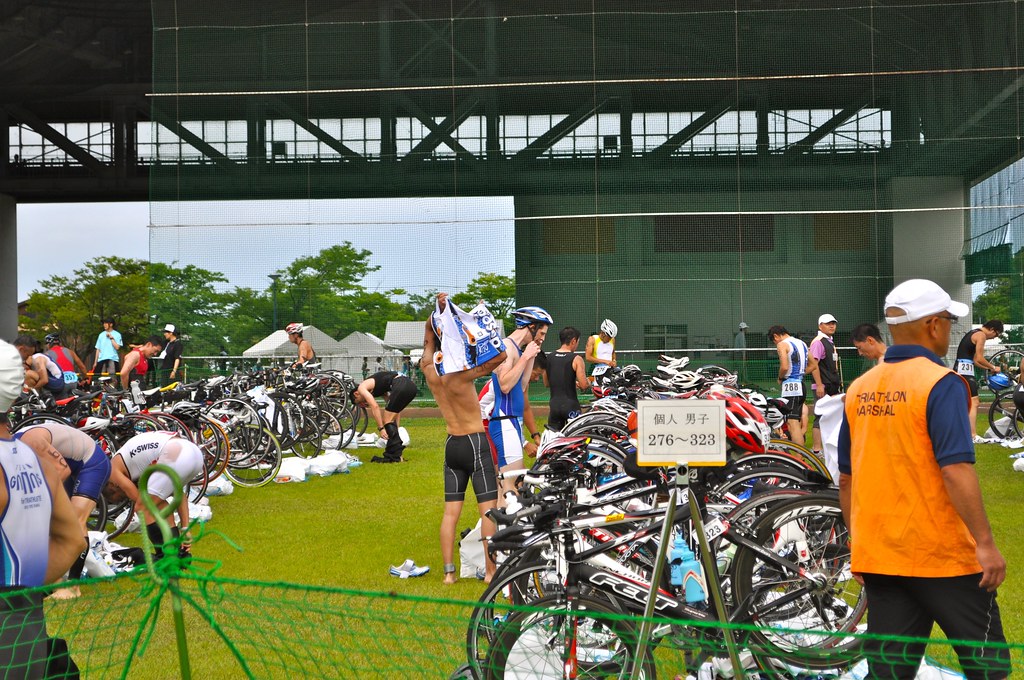 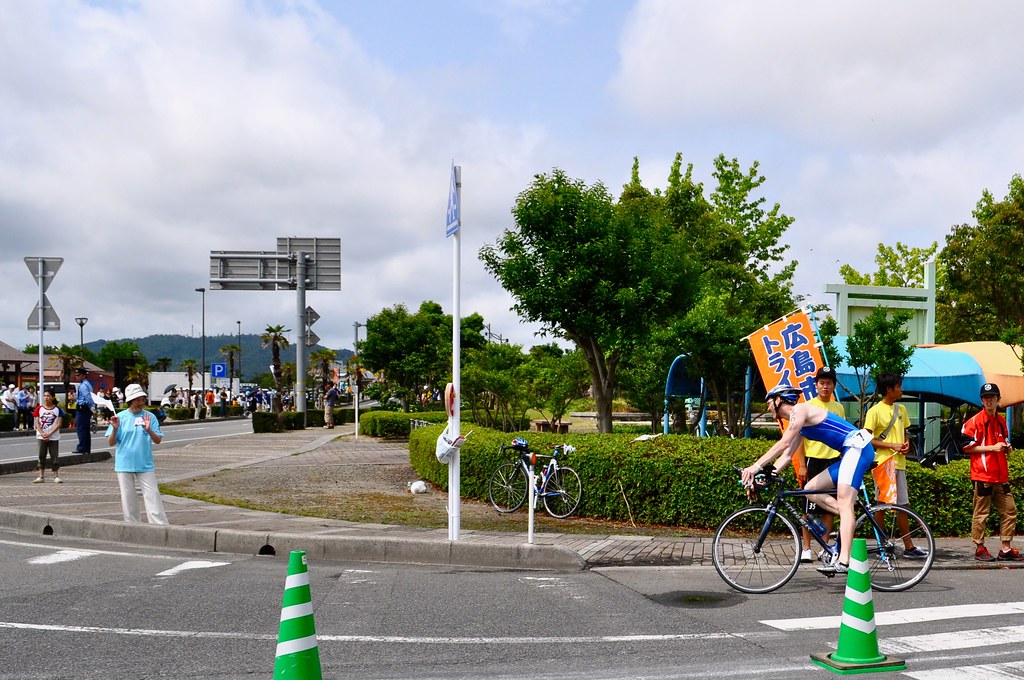 Bike : 1:04:51
People who don't know to put efficiently their shoes when on the bike [like me], please don't do it [like I don't], put them when in the bike park. I almost felt after 150m when already at more than 35kph one guy still struggling with his shoes cut my road in a zig zag just when I arrived at his high… duh… I could avoid him but that was a close one. 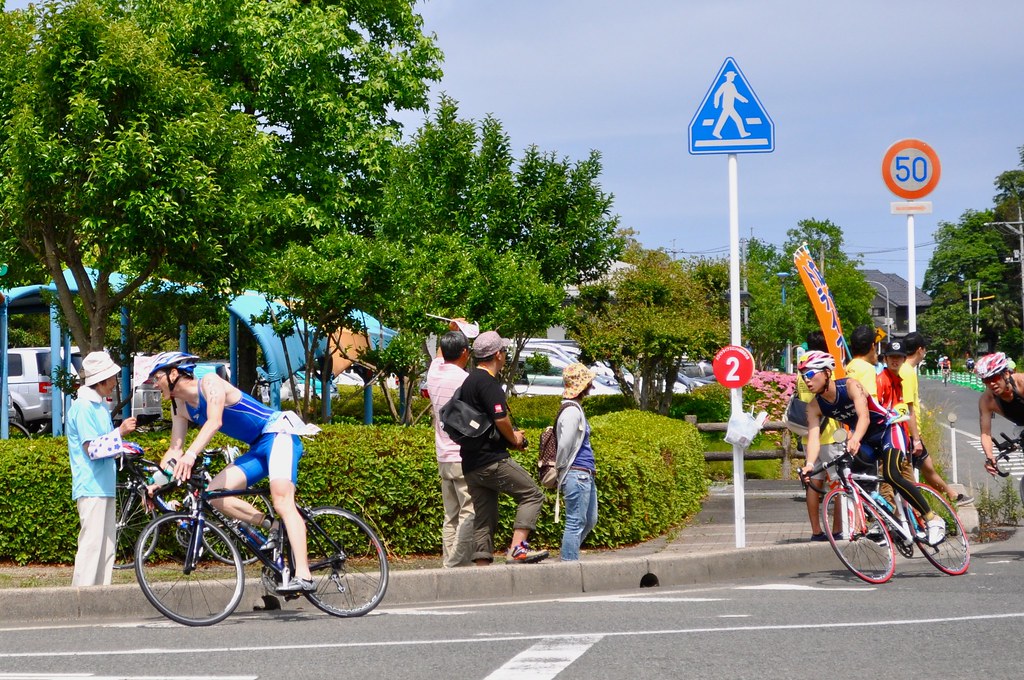 Apart from this incident, the ride went very well. I took few minutes to kind of forget the swim and focus on this part.
I know the course perfectly well so I knew where to push. The loop is mostly flat with only a climb of maybe 1.8k in 2 steps with a 45m elevation.
I finished the 40k in 1:04:51, 23rd bike time among 305 and could reach rank 35 overall which was what I was aiming. I am happy with that as it might be in fact one of my best bike ride ever. And I feel there is still room for improvement. 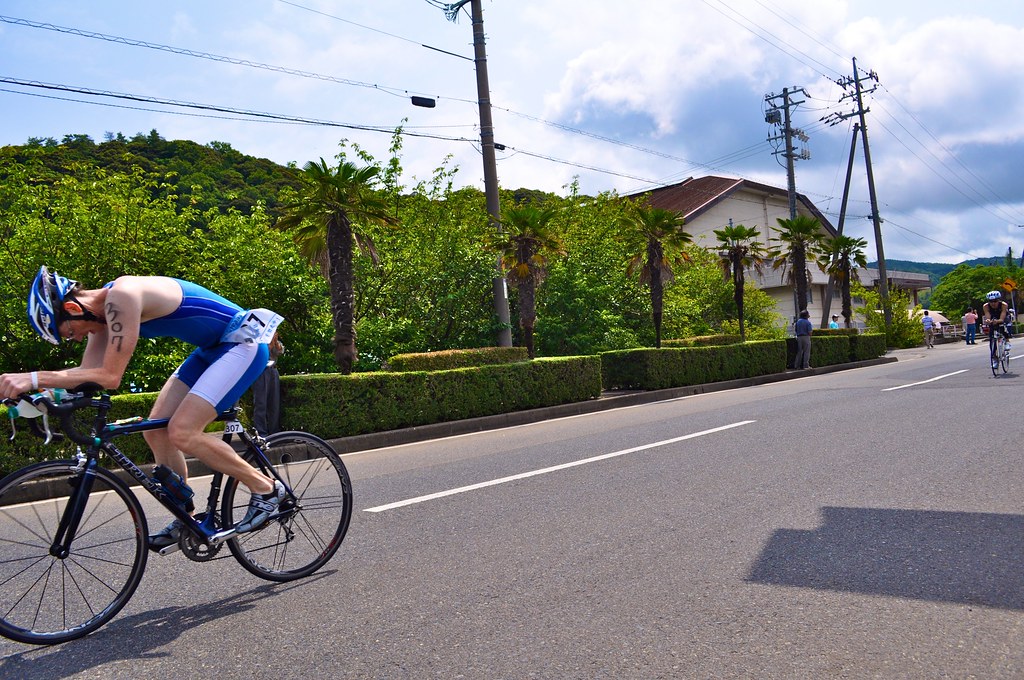 T2 : nothing special, it went ok. I chose to wear socks for comfort. Referee asked me to put my helmet in my plastic bag.
That was definitely the most ordered bike park I ever seen at a triathlon! :-) 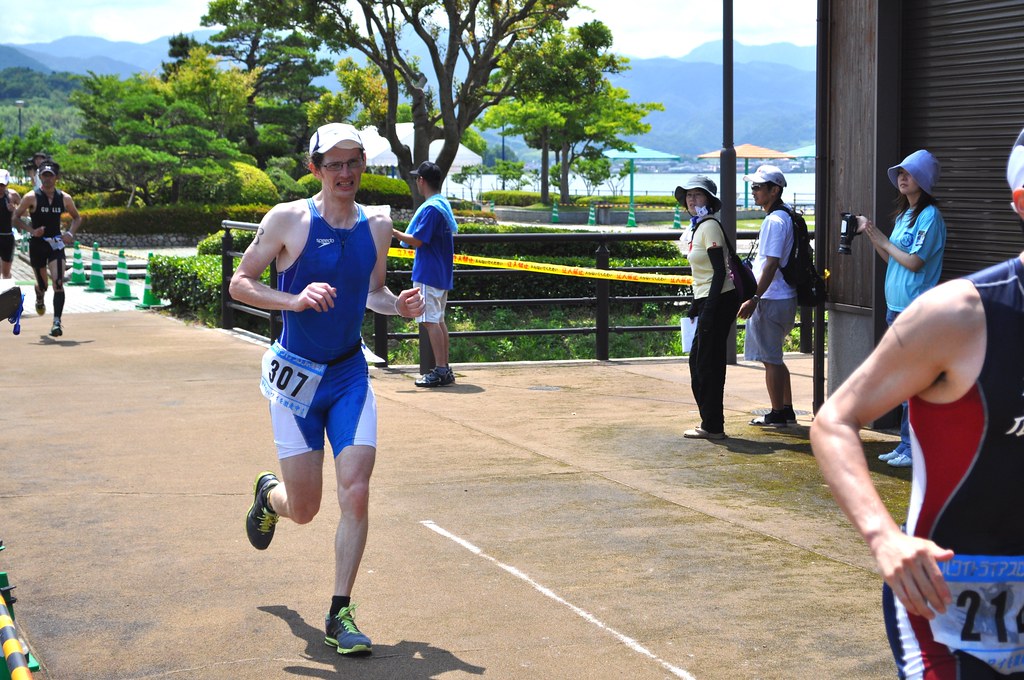 Quickly I felt something was wrong. Still the first 2-3k I ran at a "normal" pace for me. But then very quickly I felt I was just out of energy, totally empty. I did some simulation (hard bike followed by race pace run) at training but never felt like that… Too bad.
So from k3 to the end, 32 runners passed me without being able to react… Kind of frustrating. I kept my jogging pace until the end to finish. 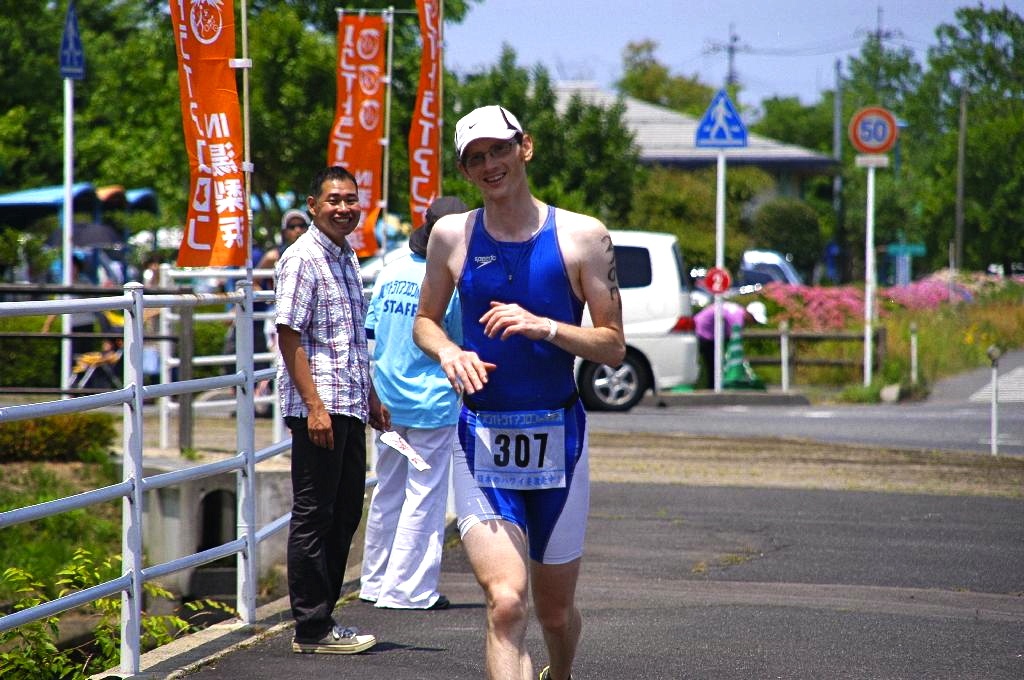 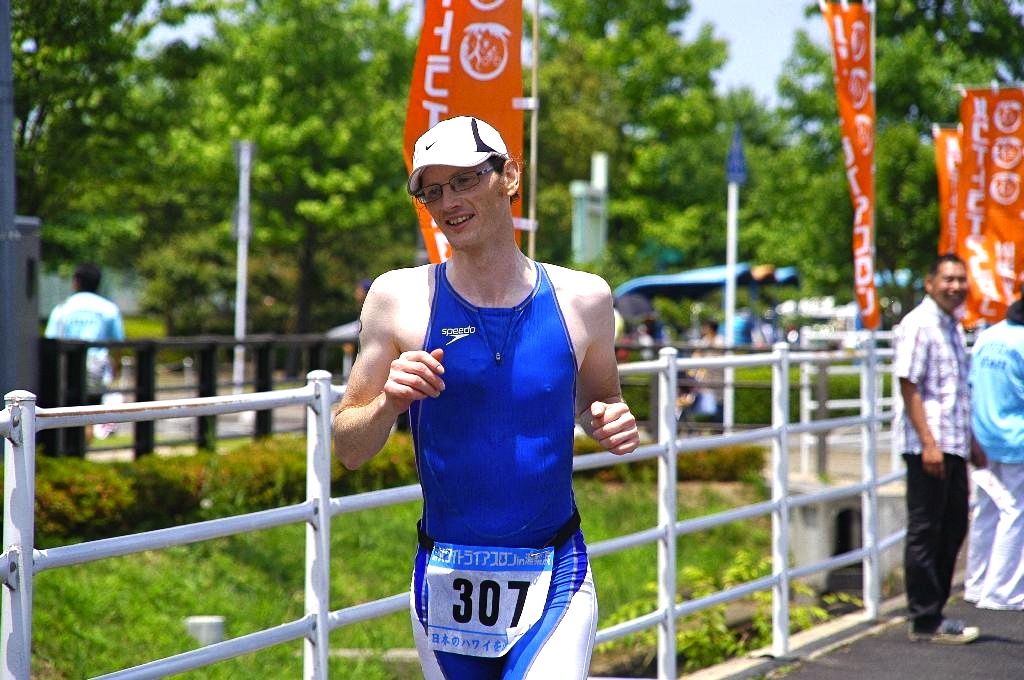 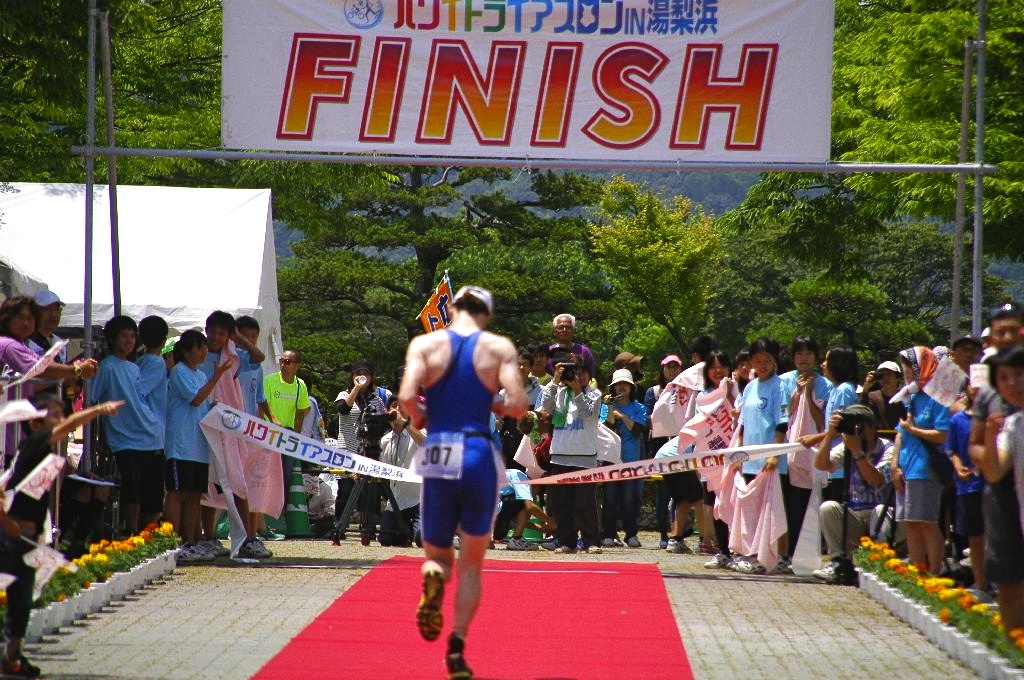 Just after crossing the finish line, the local TV TCC who did a portrait of me few months ago were waiting for me and a short interview… Ha ha, needless to say I was not in my best condition for an interview in Japanese and to show my face on TV but I did my best anyway.

Total result : 2:25:47. 10 minutes more than expected.
67/305 overall and 15/76 in my age group (35-45).
I guess there are things that training is not teaching and I needed to learn how hard a triathlon is again. Fair enough!
I want to thank all the organizers of Hawai Cho and Ishikawa Dojo Triathlon Club of Kurayoshi for their hard work as well as the Tottori Triathlon Association and all who volunteered or cheered up the athletes.
Next big triathlon event in Tottori will take place next month with the All Japan Kaike Triathlon. Equivalent of Nice in France. Oldest long distance triathlon in Japan with a selective bike course near Daisen mount and a grueling marathon as taking place in the terrible humidity and heat of July…
I won't participate this time yet but I will go to support my new friends and take photos. (I actually volunteered for this triathlon during my first trip in Japan in 2005).

As for me, my next goal is Sagi Shima [Sagi Island - Hiroshima prefecture] triathlon in mid August, it gives me 2 months to work on my weakness. This triathlon seems fun to do with a selective course and a loop all around the small island to ride 4 times on the bike and one time for the run. Heat will be a key parameter of the race for sure. Swim in the sea will suit me better hopefully...