Back to Training, seriously.

This is has been a many times failed project during the last 5 years. Many times I thought : "ok this year I will train well and will race triathlons", it never happened.
Before to live in Japan I was always living in places in France where it was easy to train, especially for the bike part. Basically I just had to get out of home and could ride with a minimum of trouble concerning traffic. I always lived not too far from either countryside or mountains, so I barely met traffic lights on my way for example. Difficult when you are used to such "quality life training" to adapt in a more urban environment.

In Yokohama I could never get into training for cycling. I tried but never really enjoyed it. Many people manage to do it but I could not. Taking my bike from home, I first had a minimum of 40mn inside traffic before to be able to start to train seriously, it meant 1h20 of ride that was boring and/or dangerous. Or I could ride in Minato Mirai area in early morning for short session, but I got bored quickly [and I have trouble to wake up at 5:30AM]. Other solution was to take a train carrying the bike in a bag early morning to reach enjoyable roads… : at least 2 hours on a train just to go and back from a training session! I really respect people who do that, it is showing their dedication to cycling, I just could not.

So I gave up on triathlon and just kept a fair condition by jogging and swimming from time to time, quite irregularly though. That said I managed to run two times Tokyo Marathon (without proper training but that's an other story). Also riding my Fuji feather (fixed gear bike) everyday helped my muscles not to forget completely the feeling of cycling. And for sure I had a lot of fun on it in the streets of Yokohama.

I even did something a bit crazy : last year as a personal challenge I pushed my limits on a fixed gear (a Fuji Track bike lensed by Fuji Japan- Akibo San) : I rode from Yokohama to to the fifth station of the Fuji San (where the road stops before the trekking path starts), that was a solitary effort on a very hot and long day (138km, from 0m to 2305m), I loved it and realized how I was missing cycling! You can read the report and watch mini videos [Fuji project]. 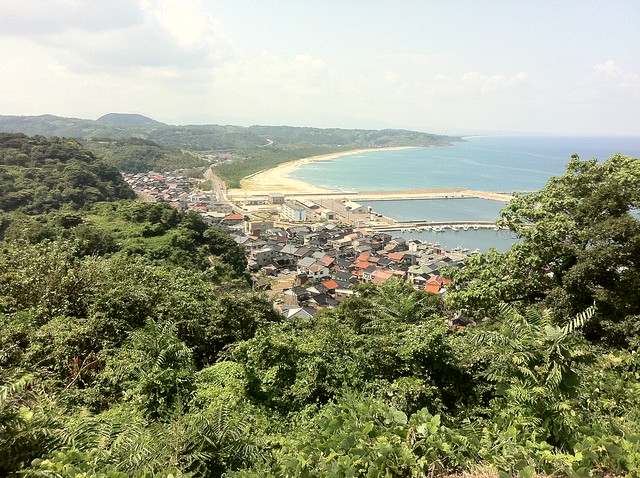 (Sea of Japan, view from Tomari)


Things are changing now. After 2 years of talks and preparation with my wife we were decided to move to her birthplace (Tottori Prefecture) this year. Outdoor sports was a huge reason for me to agree to live over there [I came many times before], among food and being able to live between the sea and the mountains :-). Even at my old age, I feel tempted to try new sports like surfing, snowboarding or mountain bike downhill, yep all of this is possible in one of the smallest prefecture of Japan. That said in order to do all of these cool stuff, I would need to stop working and become a full time "guy who has fun doing sports"… Not sure that my wife and my bank would agree :D 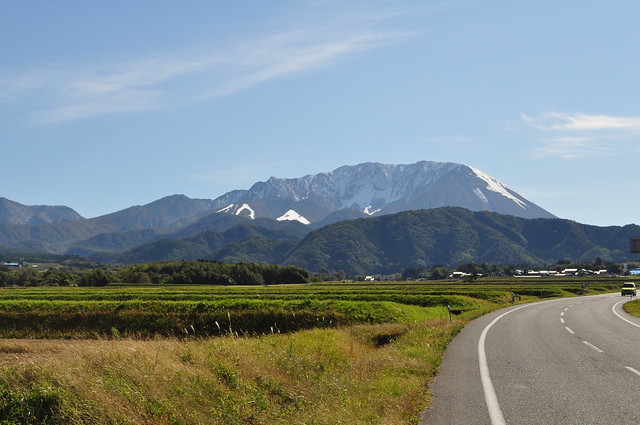 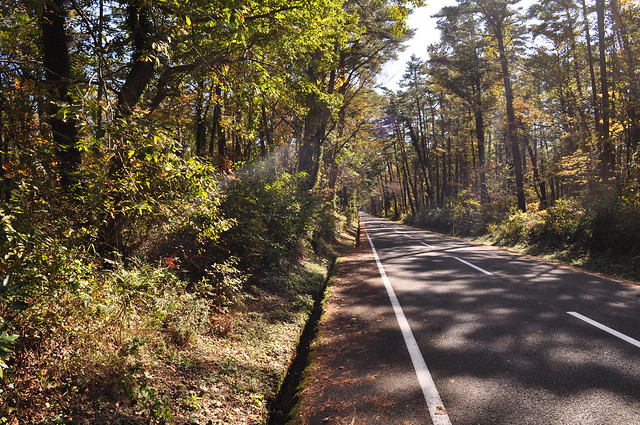 Anyway let's go back to the subject,in fact this area is just perfect for training and no surprise that one of the most famous triathlon in Japan, Kaike Triathlon takes place here. It is a very tough long distance triathlon that brings triathletes to the Daisen mount roads, an awesome area.It takes place in July though, not a very good idea with the heat and humidity at this time of the year, I think but still it's really popular so... 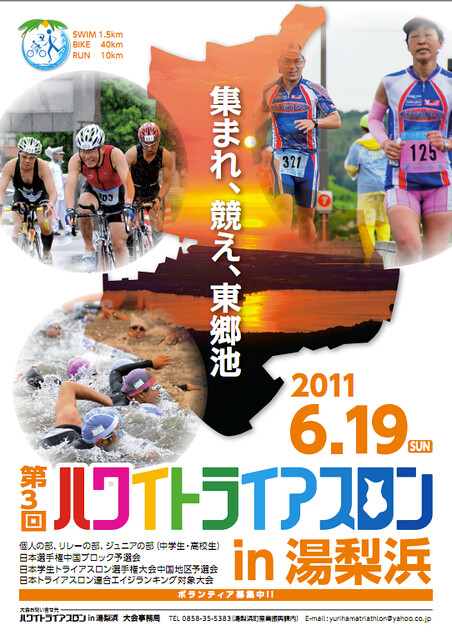 
Also just 3km from were we live now is the Hawai triathlon, an olympic distance triathlon organized on June. Yep, the place is called Hawai (羽合 in Kanji), I guess with a name like this and the perfect location for a triathlon with the Togo lake, they had to organize a triathlon! It turns out that the city has a connection with Hawaii and their official cool-biz uniform is Hawaiian shirts, seriously :-)
There are also marathon races, swim events along the year,and also many events in the near prefectures. 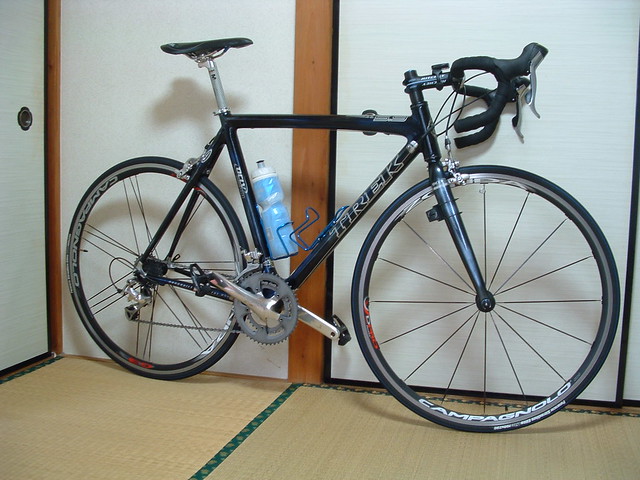 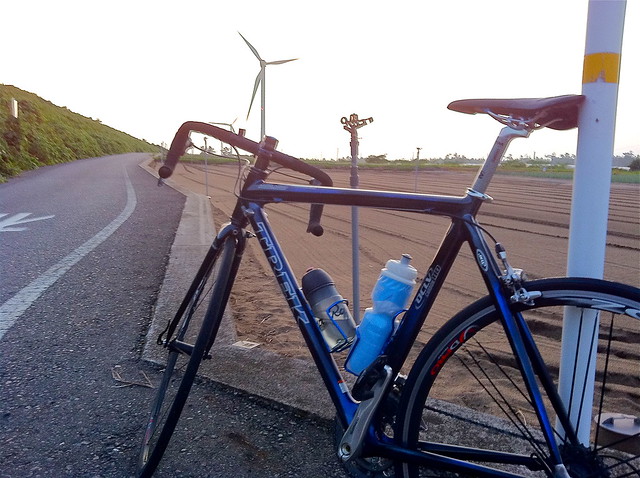 Trek Madone 5.9 SL, I heard a guy named Lance Armstrong rode it, so it must be good for me also :p

It's now one month we have been living in Tottori and one of the first thing I started of course was to train again. Running and cycling regularly, more swimming will follow soon. I already enjoy my rides on my Trek Madone 5.9 SL that was waiting for me to get it out of the garage (yes I know what a shame it was).
How much I was missing this feeling to ride as fast as I can! And also what a weird feeling to ride a free wheel bike after 2 years of fixed gear only!

I am now on my way to get back in shape. The goal is to be "competitive" again in spring 2012. Well, I mean at my level, that's always the case in endurance sports anyway…

For the record, my personal bests are : 2h14 on an olympic distance triathlon, I always thought I could do less than 2h10 but never succeed to feel great at the 3 events on a race day. That's my goal for next year.On long distance, I did only one half-ironman format [with 2.5km of swim instead of 1.9km], it took me 5h08. I'd like to try this  distance again.

As a runner my best on a 10km was just under 37mn, this one will be hard to reach again, I would be happy with a 38mn. My marathon best time is terrible (3h35), I should not have a problem to improve it.

For the swimming part, I started to really swim at 25 years old so I never was a natural, it's only after lots of work that I could feel almost like a "real" swimmer. My personal best is 5:28 on a 400m (in a 25m pool) so yes nothing crazy but when I started to swim my first test was 1:58 for 100m only (and no way I could swim 400m back then)… You can imagine the work it took to improve my level then. Now I am feeling that it's going to be a hard way again but I got motivation. My target is to be able to swim in less than 24mn for 1500m in 2012.

All my personal best are more than 6 years old but I am confident that even if I am 36 years old now, I can be faster than at 30. That's an interesting challenge anyway! 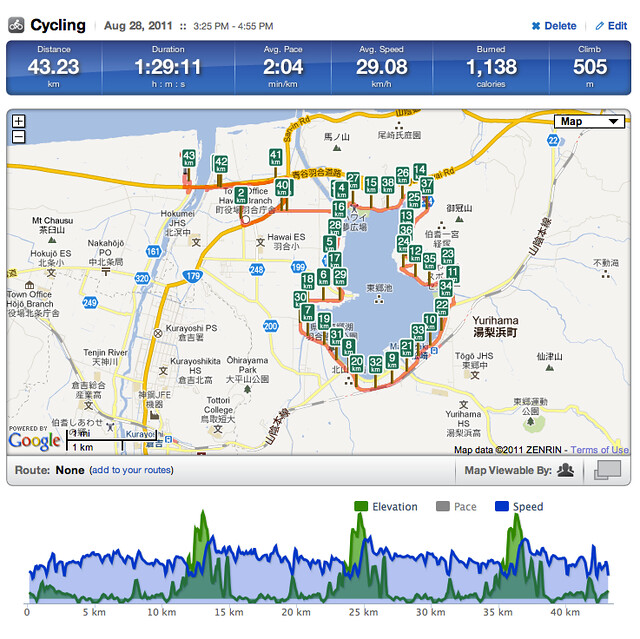 
I am using Runkeeper to keep track of my trainings as you can see on the top page of the blog, if you use it also please join me in my "street team"! I might build a javascript widget so anyone can embed its training journal (one more project on the list).