Two weeks ago was the third edition of the Green park Kasai Triathlon in Hyogo prefecture. But only the second one to take place as last year's one was cancelled because of a typhoon.

This year weather was supposed to be just cloudy but it was a clear blue sky race with a good 30˚C.

Kasai is located at the North of Himeji between Kyoto and where I live, the Tottori prefecture. It was just a matter of 2h of driving to reach it.

We arrived on the Saturday to confirm the registration, get the race bag and follow the pre-race information meeting. I don't know how it is now in France but at the time I raced over there we could just show up on the morning of the race :-) 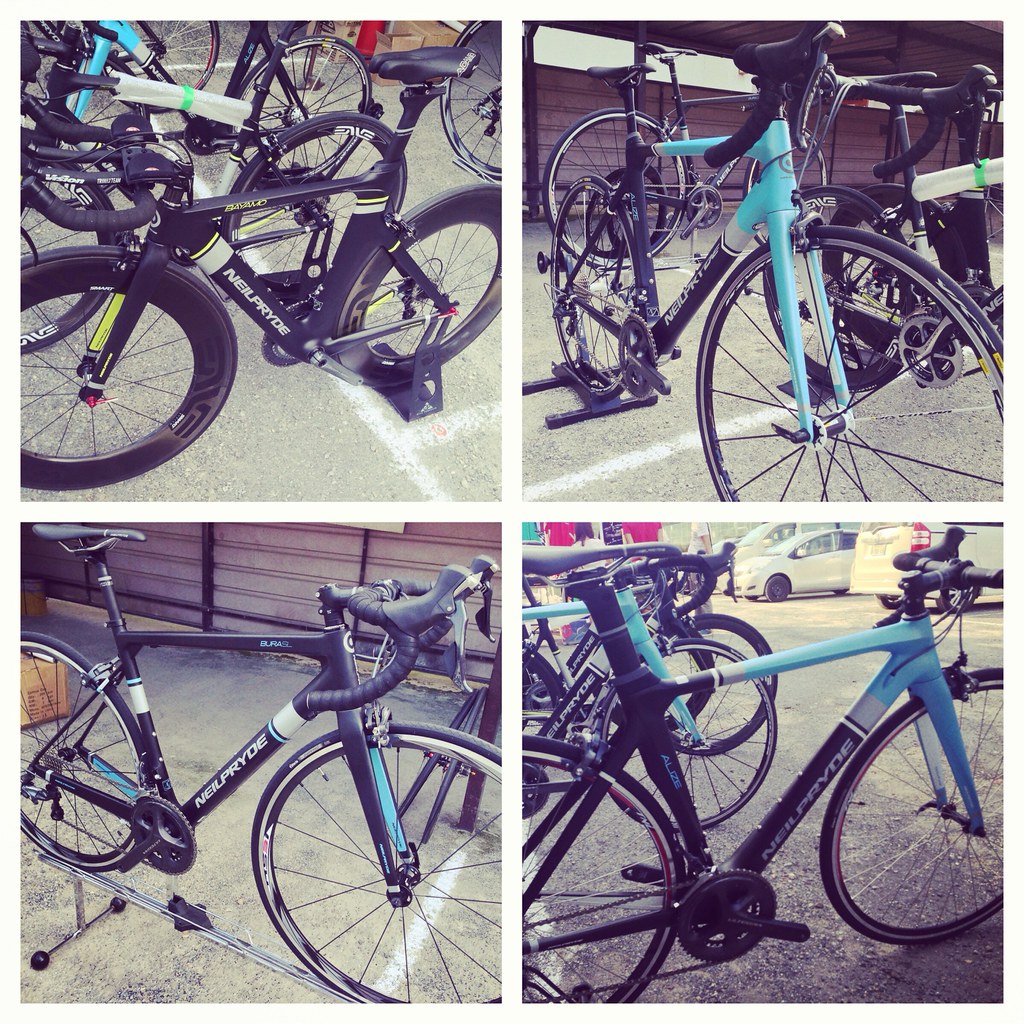 Neilpryde bikes booth at the reception, yeah they look great. 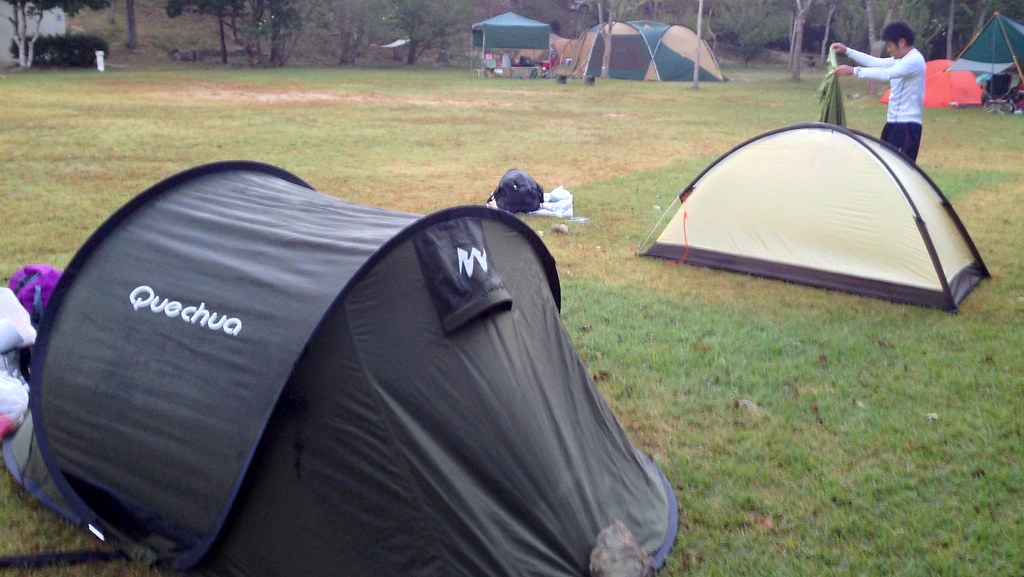 We dressed our tent not too far from the race location in the near mountain in a free (but very well maintained and served) camping, that was nice. 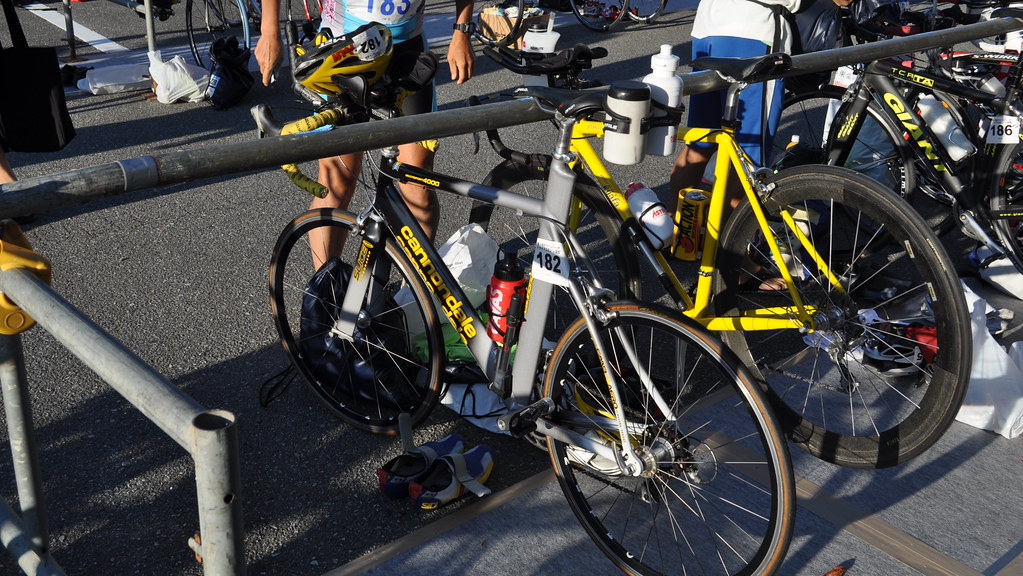 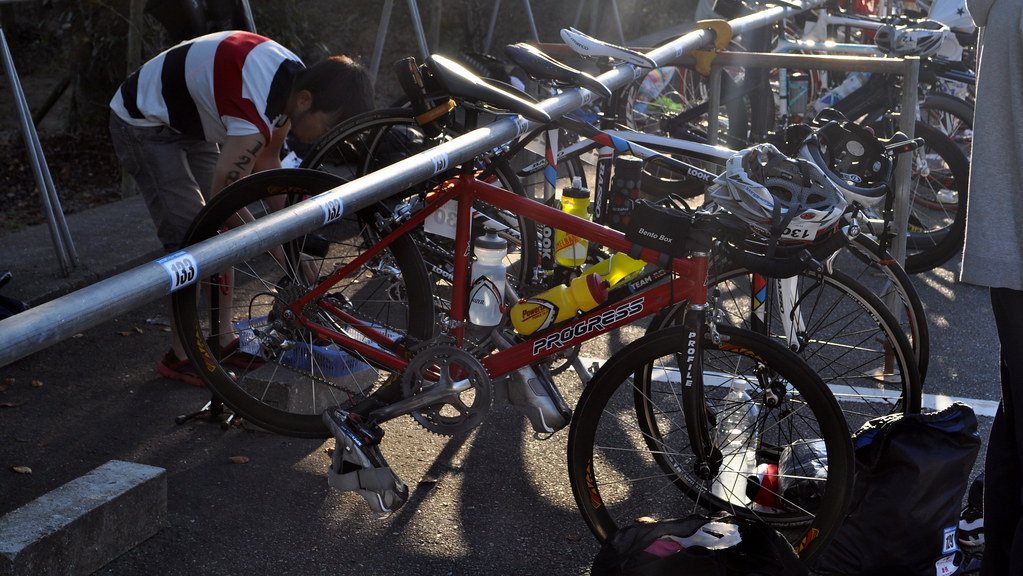 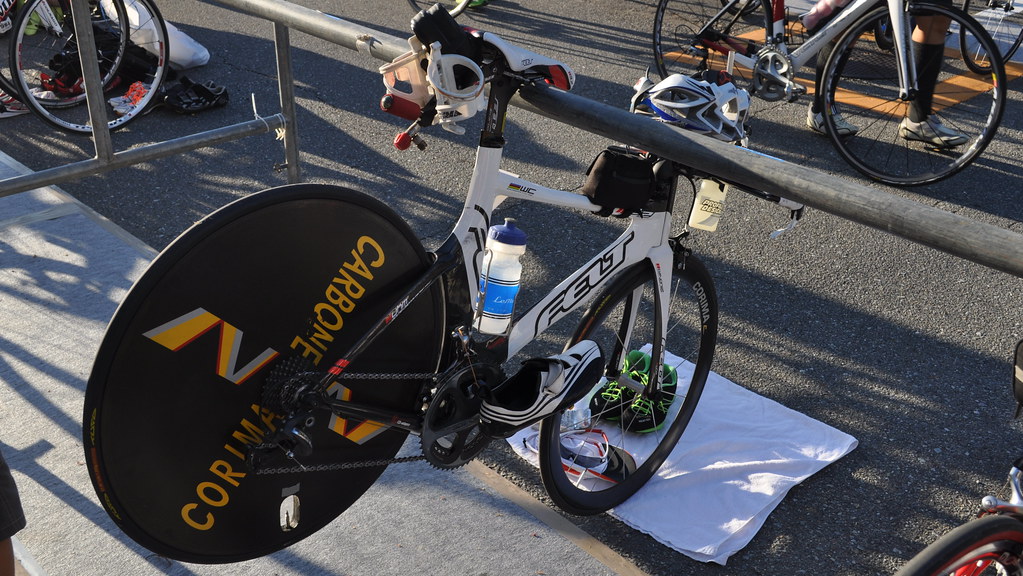 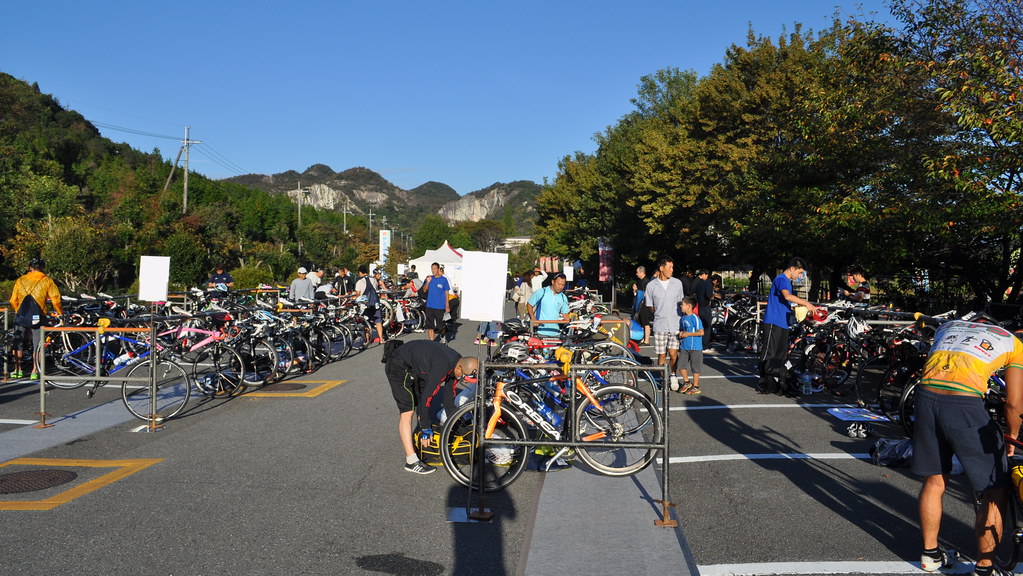 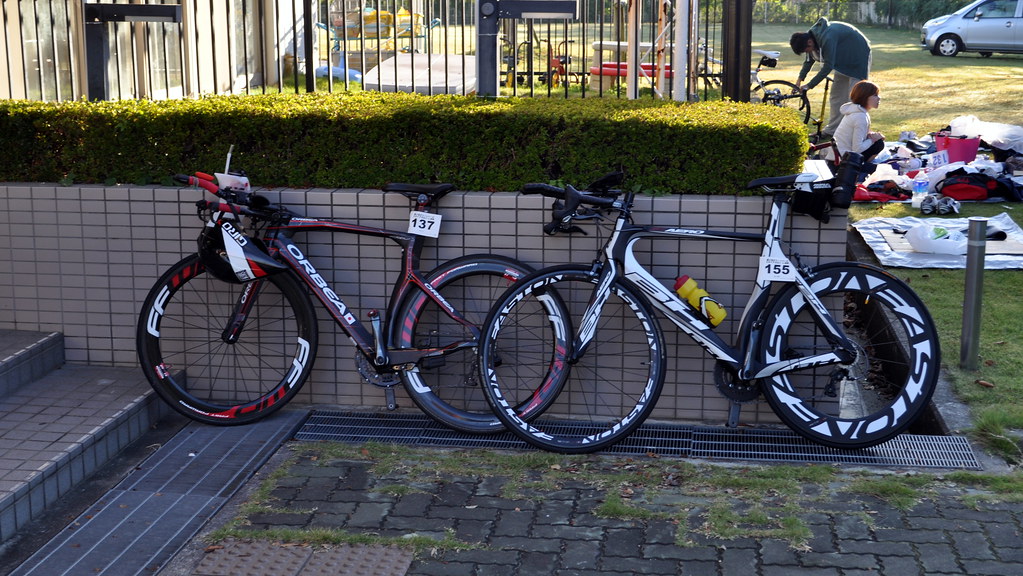 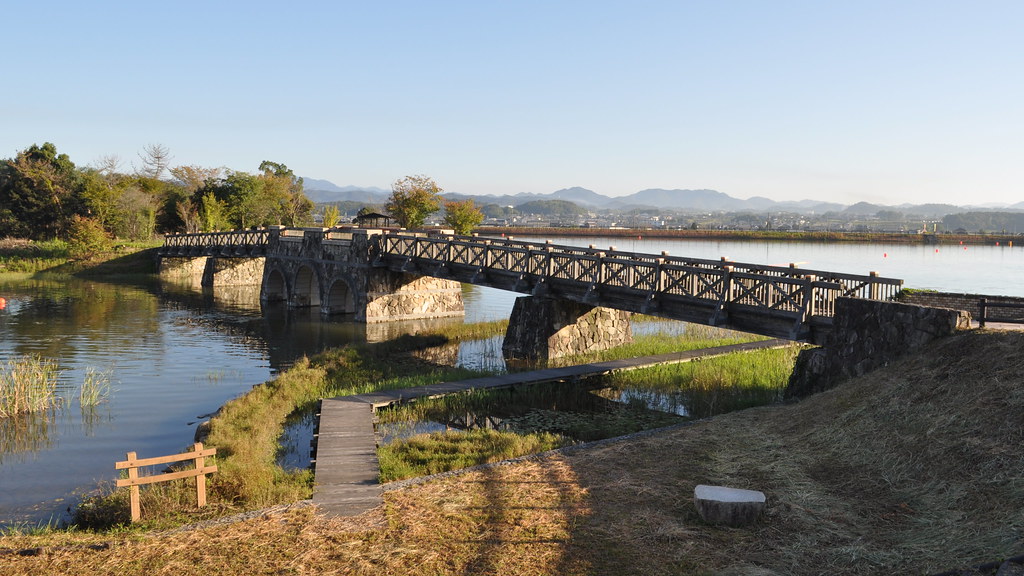 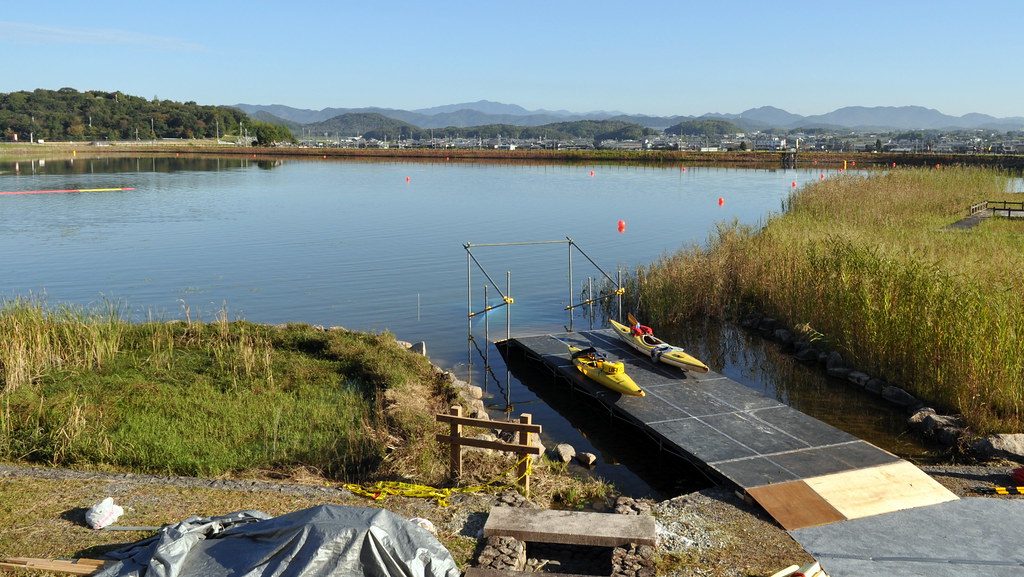 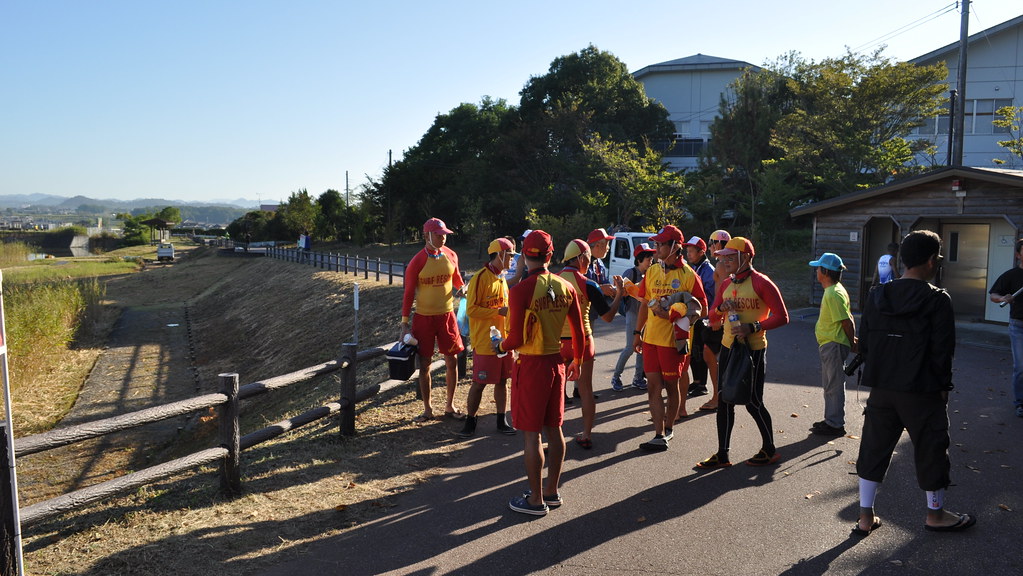 We were about 150 triathletes at the start and the lake being not very large they decided to have two start 5 minutes from each other. 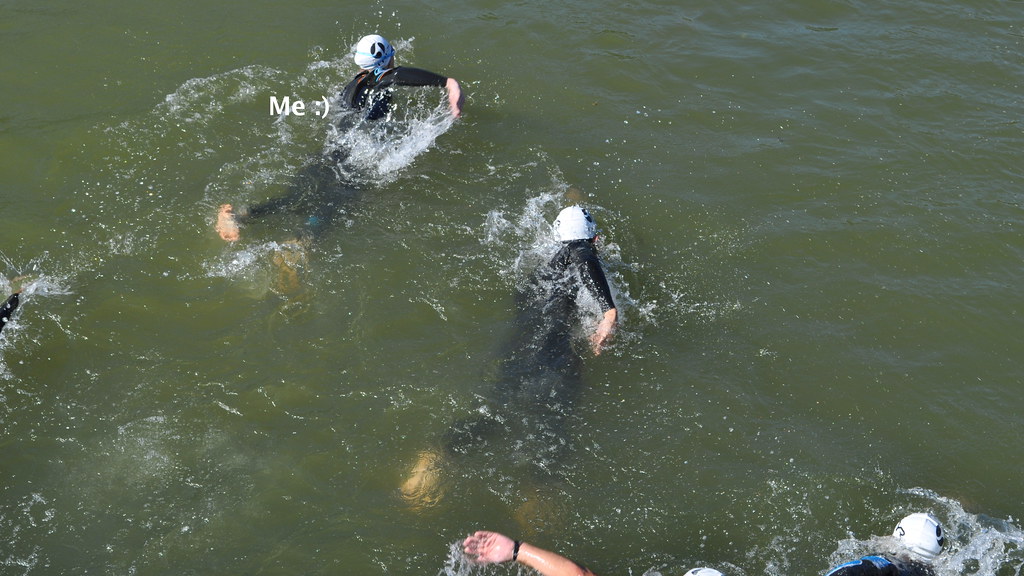 I was in the 1st group to start which was nice. The lake proved to be quite deep which is good and the start was quite smooth with not too much battle. I decided to start fast and try to keep a good position as long as possible.

Big novelty for me, I have finally prescription goggles : it's really a game changer and I am sure I saved some time by seeing better (sounds obvious but well :-). 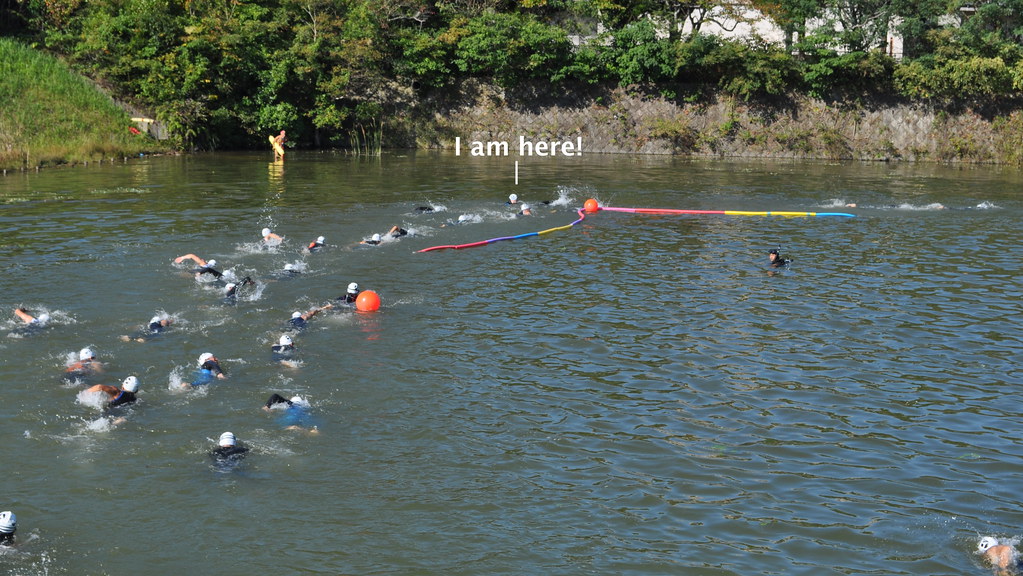 We had 2 loops of 700m and about 100m to reach the goal. Quite soon I was alone and could see I was not too badly positioned. 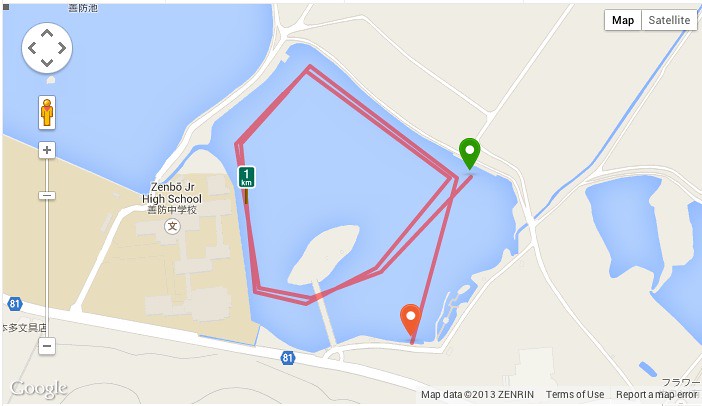 The swim felt long again, but I felt powerful enough to the end and kept my pace. At training I was swimming 2x500m in about 2x8:15 so that would be about 25'/1500m. Not sure exactly how long we swam but the first swimmer time was in 23' when usually he swam in 20'. 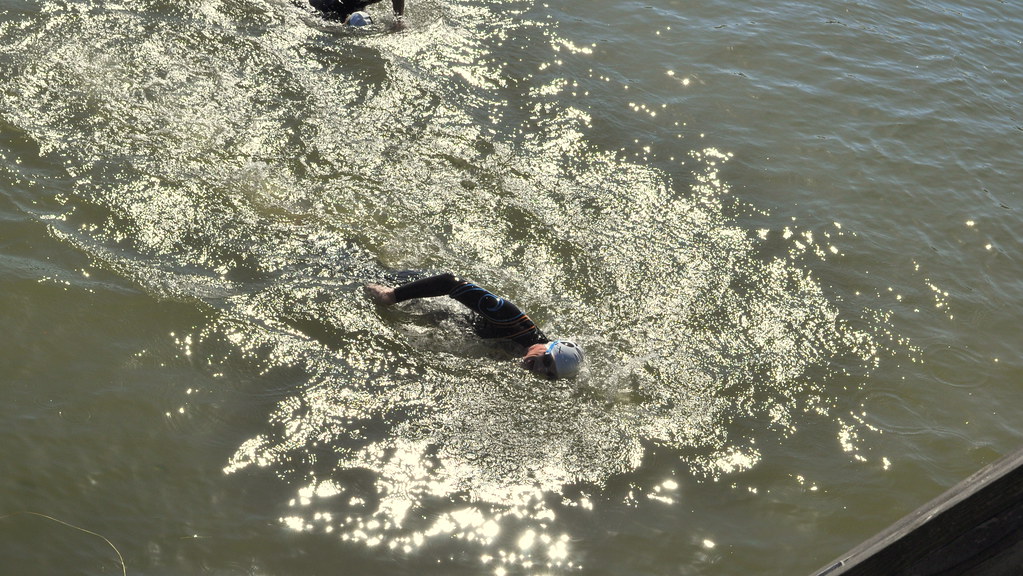 When getting out of water and reaching the bikes park, I saw that few bikes were gone and not so many athletes around at the same time.

I actually finished the swim at the 18th position overall. I am very happy with it, 6' from the fastest swimmer that's not bad and I know I still have progress to do, my swim training being regular (about 2 times a week) but quite light (about 2k each time). My secret goal was to complete the swim in the top 15% so that meant 22/23rd in a group of 150. So 18th was a good surprise, top 12%! (yes, I like numbers). 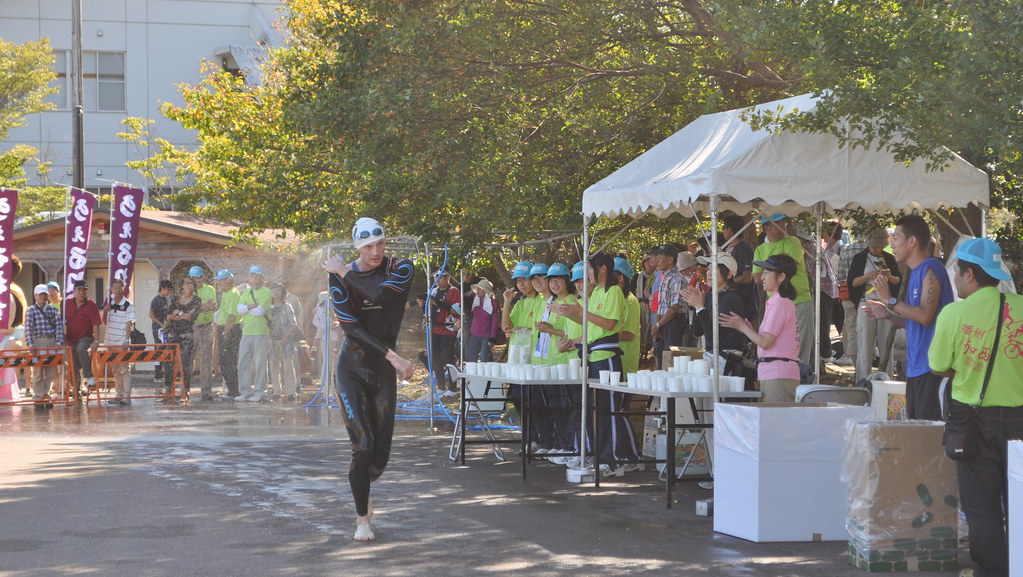 Bike : First time such a format for me, the course was to ride 5 times the same loop! 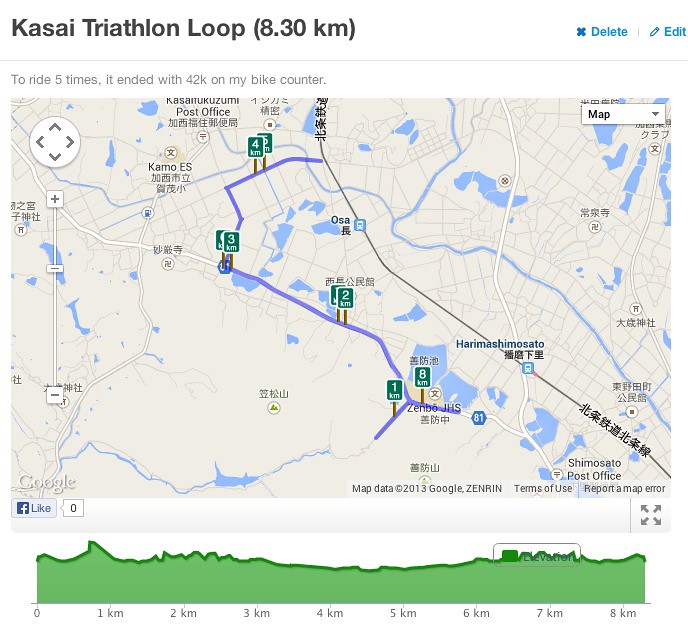 That's good for our family/friends supporters as they can see us often. As a triathlete anyway on a Olympic style format we are not here to really enjoy the scenery but to push and pull the pedals :-) So no worry. 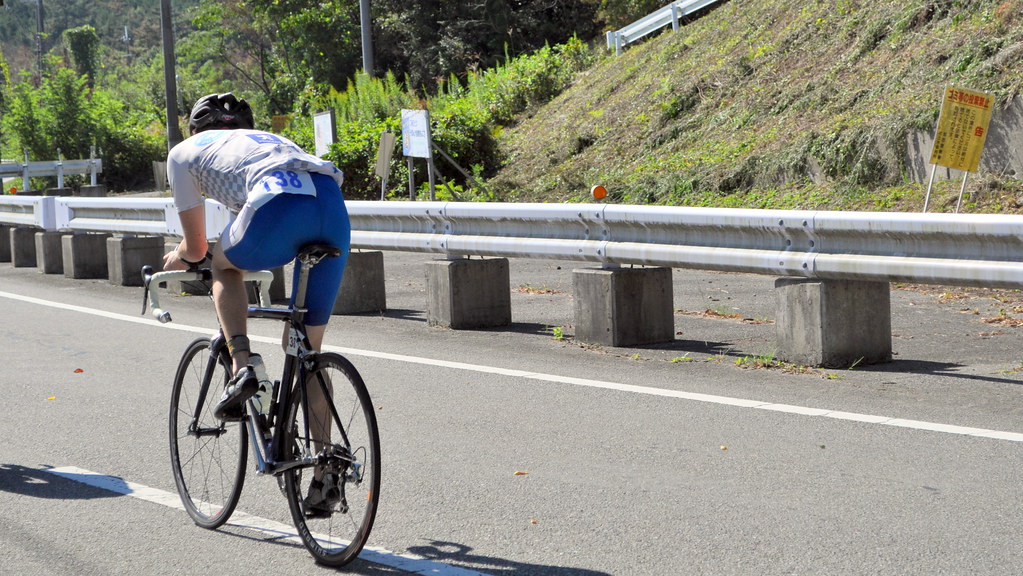 Course was at first impression quite flat with a slope but in action it was more like always slightly down or up and still with a main (short) slope.
I thought it will be a very fast course but there was 3 u-turns on the loop, so in the end 15 times where speed was almost down to 0 for a couple of seconds. These u-turns really slowed down the bike part for everyone, so not a course to have a personal best. 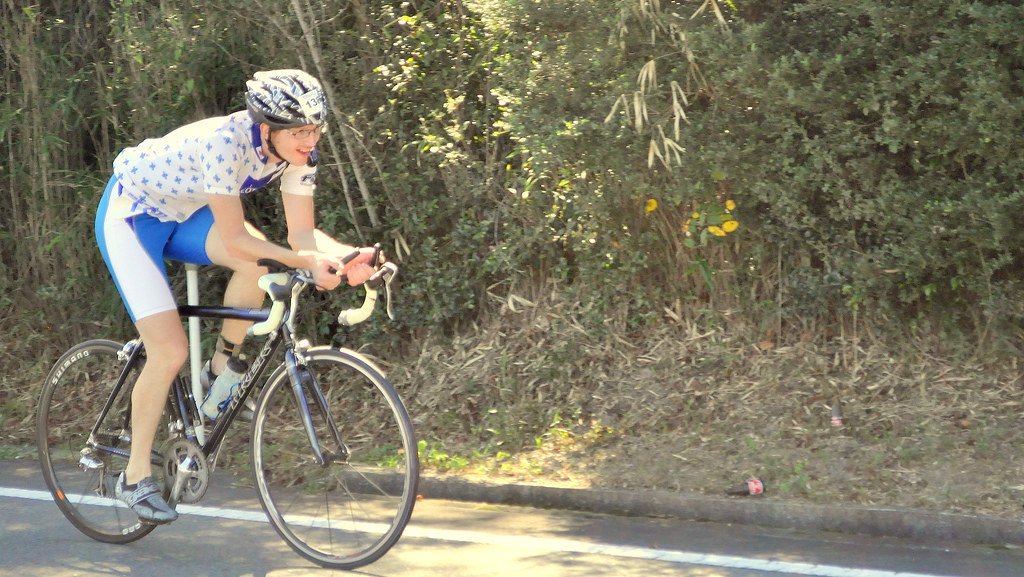 Being in the 1st group of the swim part I could count I was 17th after the 1st u-turn. Interestingly nobody from the second group was actually faster, maybe they arranged the groups by previous athletes records or just a weird coincidence.
As you can imagine with a multiple loops circuit that meant to pass other riders pretty much all the time, it seems everyone was careful enough as no accident happened. Good. 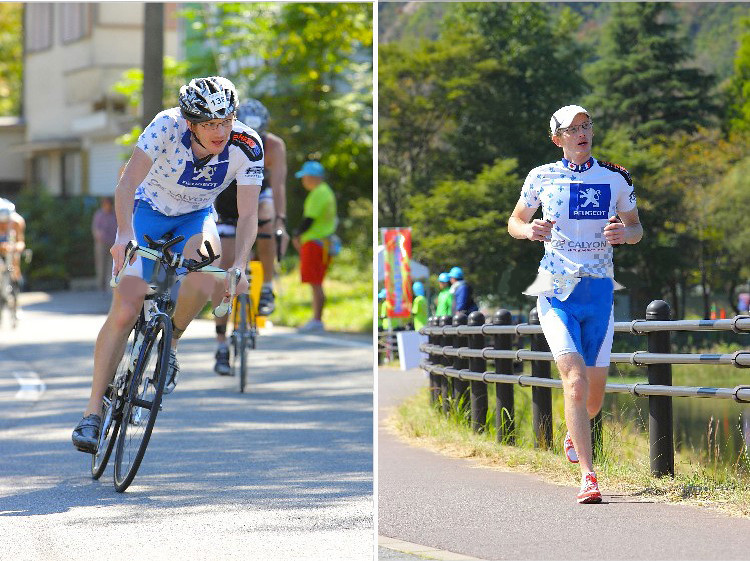 My time was just 15 minutes by loop of a 8.4k circuit so 1h15 for 42k on my counter. Not so fast in fact (I did faster at training) but the 15 u-turns are the reason I think. I finally got the 15th bike time, 5 minutes from the fastest rider. Happy with that too.

Also I must say that I had a good ride with an other triathlete. At first we were 3 to be in the same pace, we were careful to not ride as a group and were often checked by referees. No problem there, but one of us had a puncture and his race was pretty much over. I continue to battle with number 165 till the end. I will remember the sound of his full carbon rear disc when I was passing him in the hardest place and when he passed me in the fastest part. Even without drafting that's a good help for sure to battle with someone.
We arrived separated by a couple of seconds and got out of the park at the same time. We had a brief friendly talk and I pass him. Thank you for the battle 165 San. 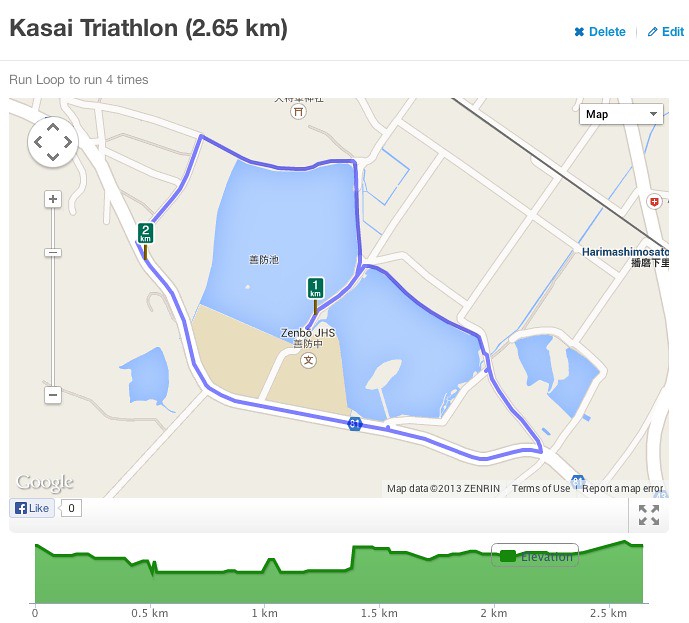 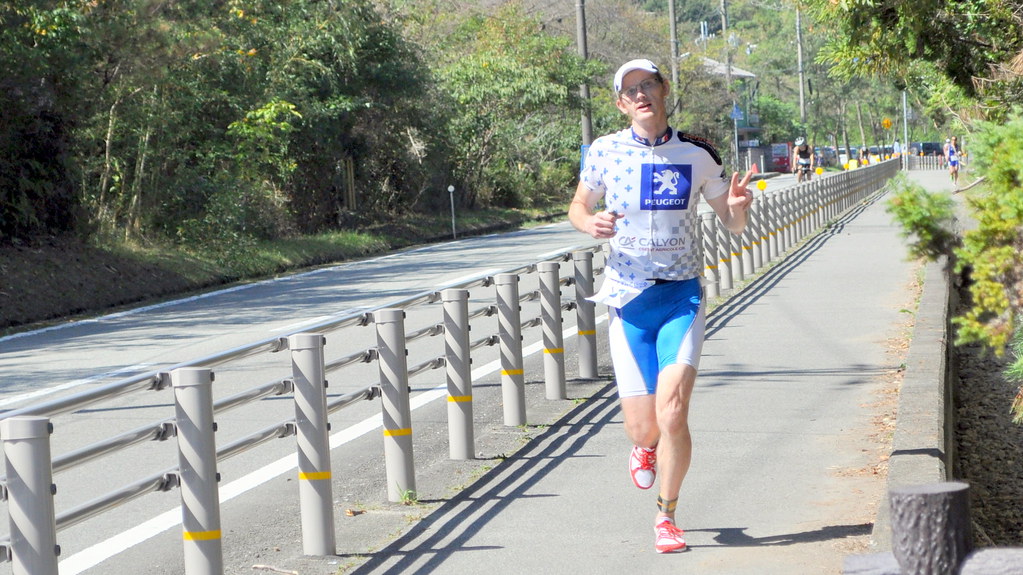 As you can see I was wearing a bike jersey the whole race. It was unexpectedly too hot and shiny again for my skin and so at the last minute decided to wear a jersey instead of just my triathlon uniform. The only jersey I brought was this one, the old NFCC Team, some French triathletes had great result with it so I'd better be good! But honestly I don't like to have brand names on my sportswear as they do nothing for me… At least I got this jersey for free at the time :-) Oh and well French economy needs support so please buy French cars, ha ha 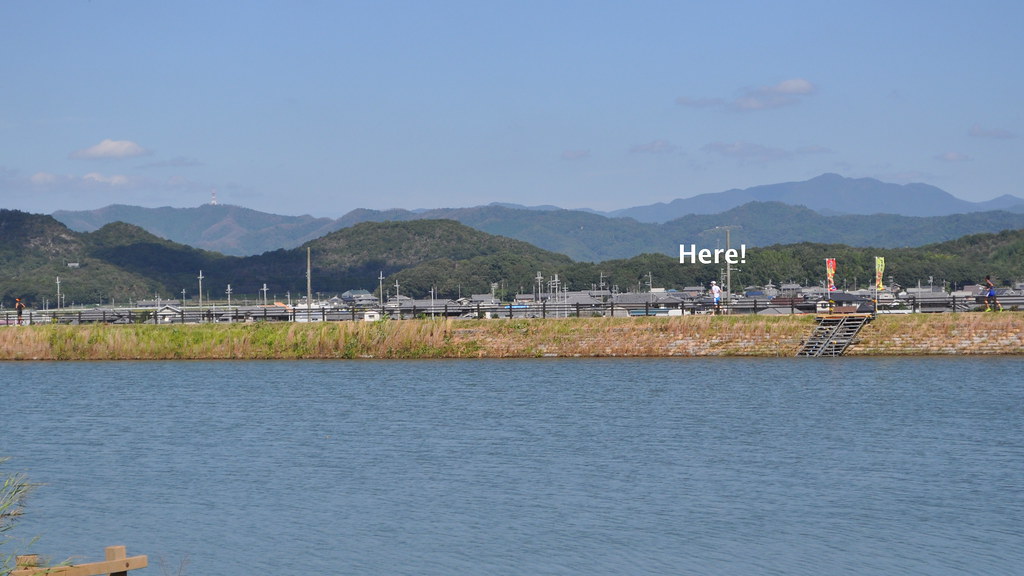 There was also a u-turn on the course and I could see there was quite a gap behind me, good because I needed it :-) 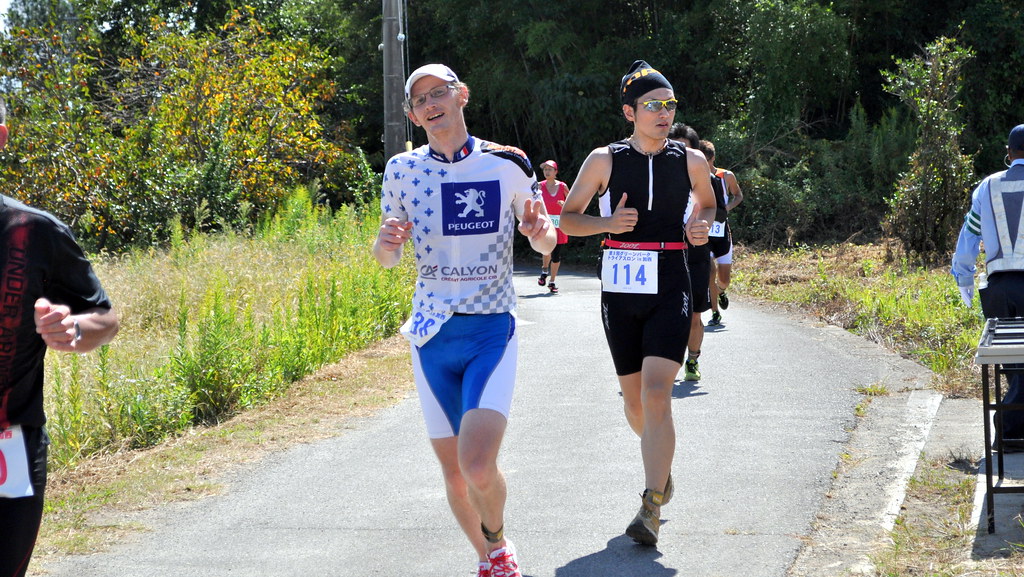 (yep not looking good anymore but thankfully people around are one or 2 loops behind :)

It was very hot then and felt out of energy quickly… too bad and a too familiar scenario now for me in triathlon now.
My ekiden run 2 weeks ago gave me confidence but that was not enough. I ran or should say jog at a pace that I never follow even on warm-up…
In the end I got the 59th run time (boo…), 53:51 so a pace of 5:05 :-( … 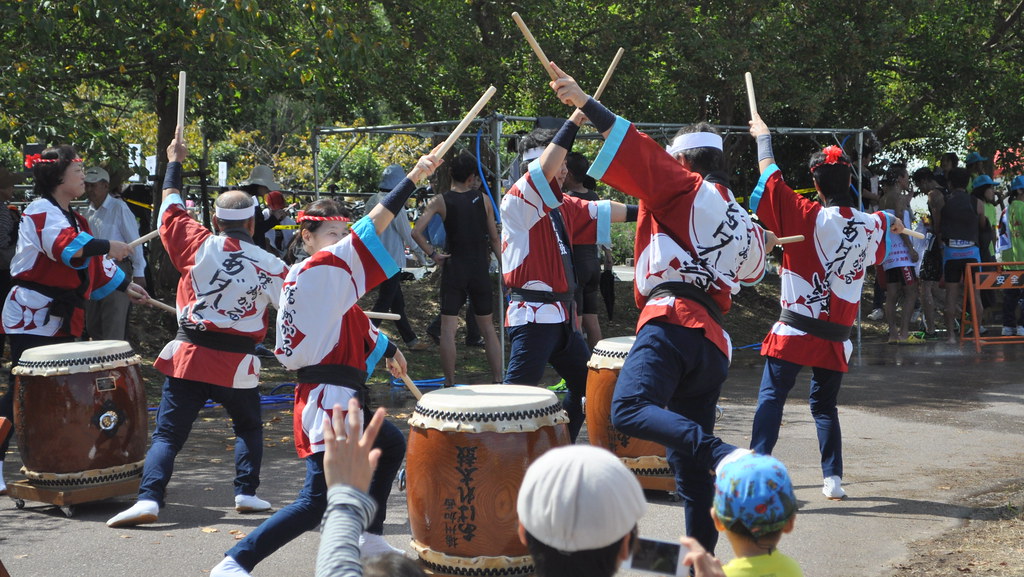 Taiko cheering us at the finish line, loved it! 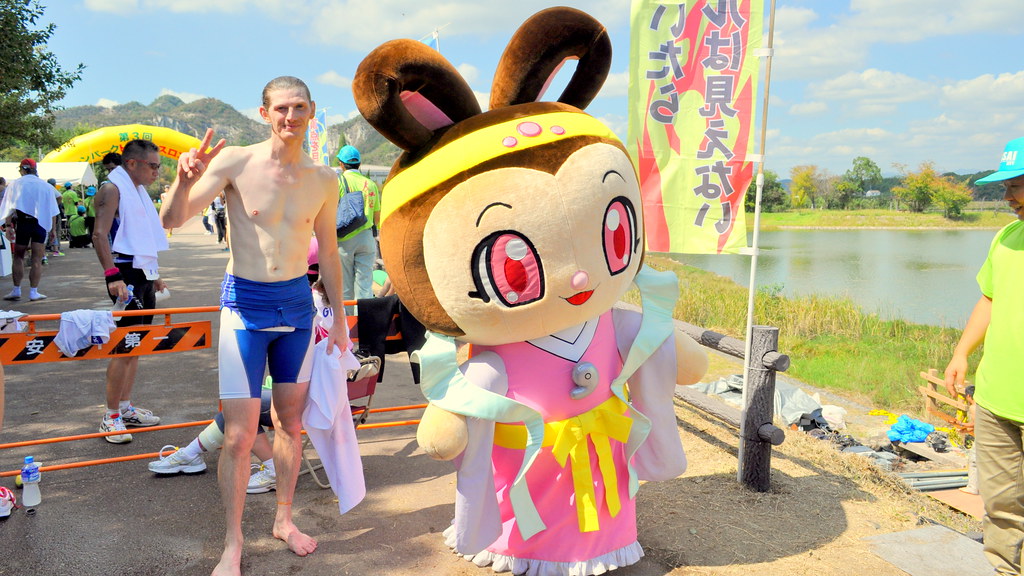 I should probably make this pic my FB banner, what do you think -_-; ?

Actually a couple of guys in front of me suffered even more than I and I passed them on the run (!?) and I lost 'only' 7 places to finish 22th of the race and 7th/36th in my age category. 9 minutes from the age group podium…

Despite the horrible run this is still my best result for the last 2 years and my 4th triathlon in Japan.

There was notably less participants (limited to 170 because of the multi loops style race, I think) than in Yurihama but still in percentage and comparing to other triathletes my best performance overall. This is encouraging. 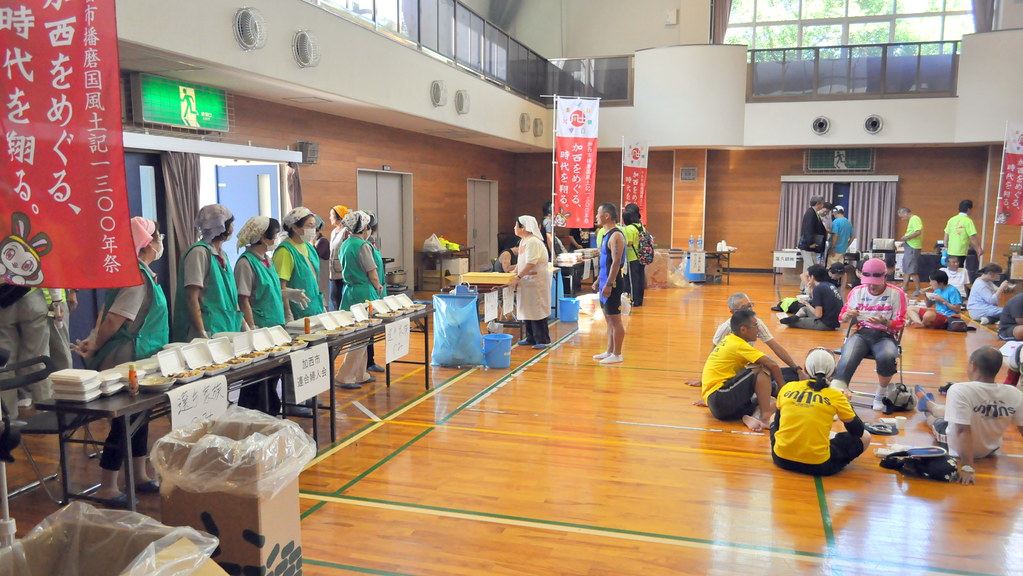 My bike and my swim clearly improved during summer. Actually my run too but not showing during this race ><

Heat is still an issue, choosing a race on end of September I thought to have a more comfortable weather on the run but not this time… Maybe I should go up to Murakami next year at the same date to have a cooler race? That's quite a trip from Tottori though. 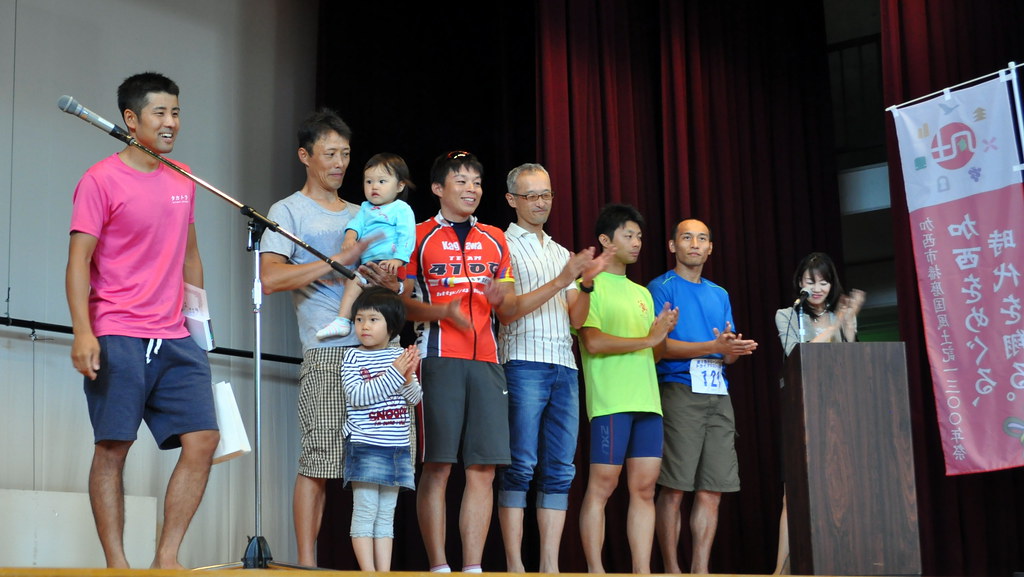 (Top 6 fastest guys of the day)

That said the race was well organized (but you need a car to participate to reach the different places to register etc…), free camping less than 10 minutes by car from location was nice, and city is close too. I liked a lot the swim with a deep enough lake. I would definitely participate again.

Different general and age groups podium were celebrated, we got a free lunch (even my wife) and got our times and ranks printed and the overall ranking displayed on site. That's fast and nice.

We found out on the parking that the triathlete parked next to us (and owner of a cool Ceepo bike) started in the second group and finished 23rd few seconds after me. So we never saw each other but ended basically with a similar time. 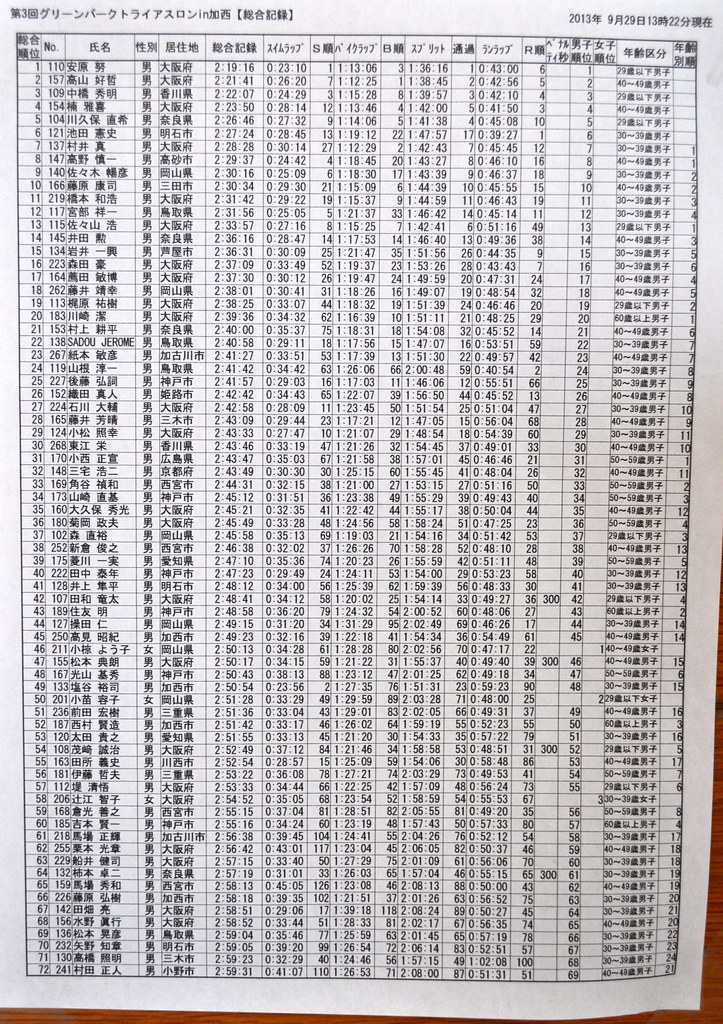 Next report will be about the bicycle hill climb race that took place last week in Daisen where I got a pretty good result too!

Now next goals are : Nakaumi half-marathon, which I will use as a training for Shodoshima half-triathlon 3 weeks after on November 24th. But in-between on November 10th is the most important Ekiden of Tottori prefecture and I will participate with the Hokuei Cho B Team. So lots of running from now!

Oh and of course, special thanks to my wife for support and photos and everything :-)