Update : Here is the video report by the local TV, you can spot me few times :-)

And also the whole results.

On June 16th, I completed the Olympic Distance triathlon of Hawai in Yurihama just near where I am living. I raced it last year too.

This year I got less hours of training under the belt so I thought it was going to be a different story. But in fact not that much.
Checking my Runkeeper logs I can see that I trained about 30% less in distance than last year and about 20% in time during the 3 months before the race. That's significant as the numbers (hours and distances) are not high in the 1st place. Especially my swim trainings were very few and just enough to be able to swim the 1.5k, nothing more. No speed no strength for this discipline this year. Bike where I am more a "natural" suffered less. 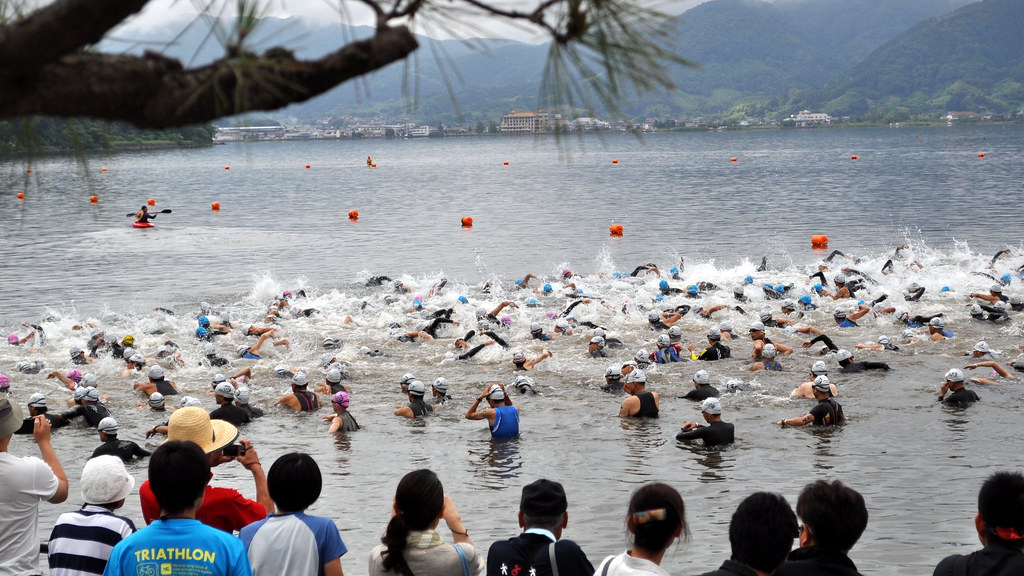 The plan was then simple : survive the swim ^^, holding and keeping an easier pace on the bike and eventually running as well as possible. 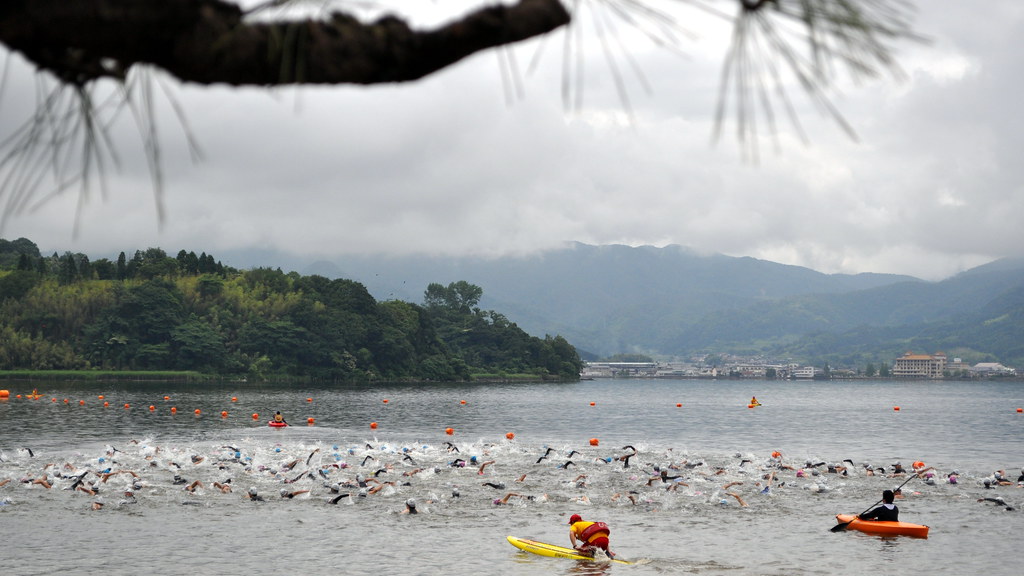 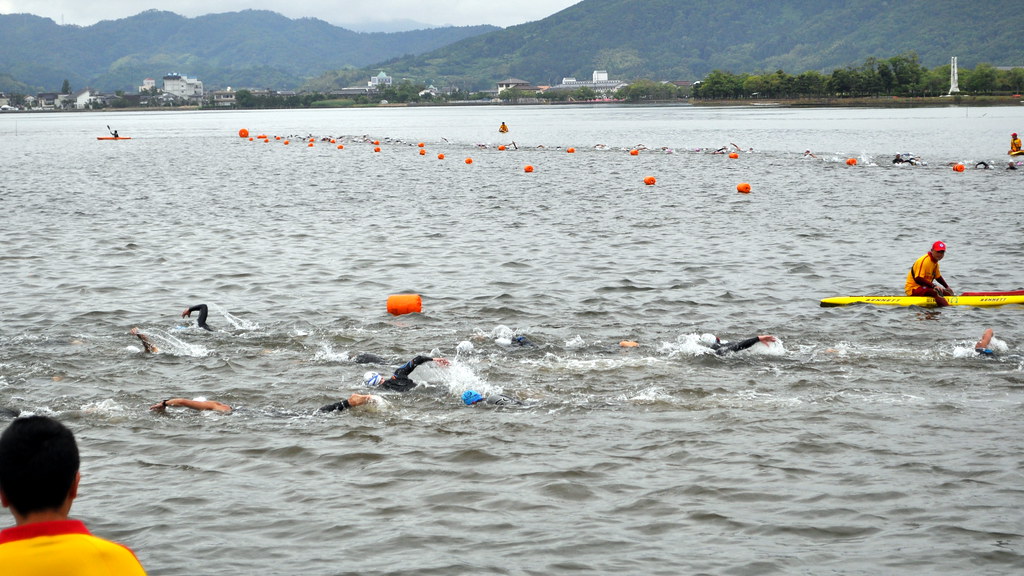 No surprise in the result. This year the swim course was much better than last year though. It was a triangle to swim 2 times and we had to stand up and walk/run few meters before to start the second loop. I chose to swim a bit far from the line on the left at the start to avoid the "traditional" battle.[especially when you are in the 'middle of the pack']. That was my 1st 1500m in a row of the year as a matter of a fact :-) So yeah, it felt verrrry long. 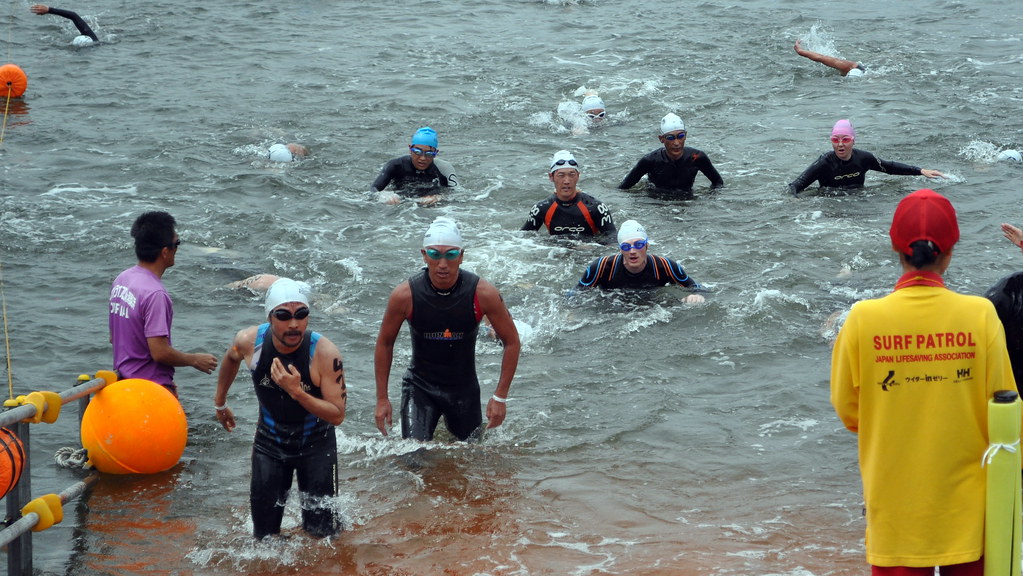 T1 : I chose to wear socks (just for comfort on the run) and my light white cycling jersey as the sun is pretty bad for me in this neck of the wood. 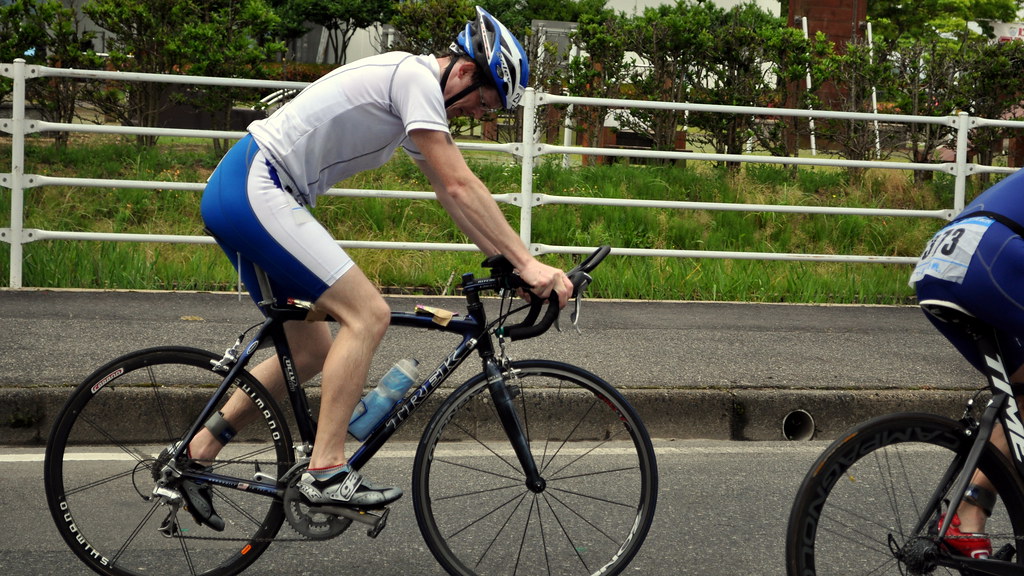 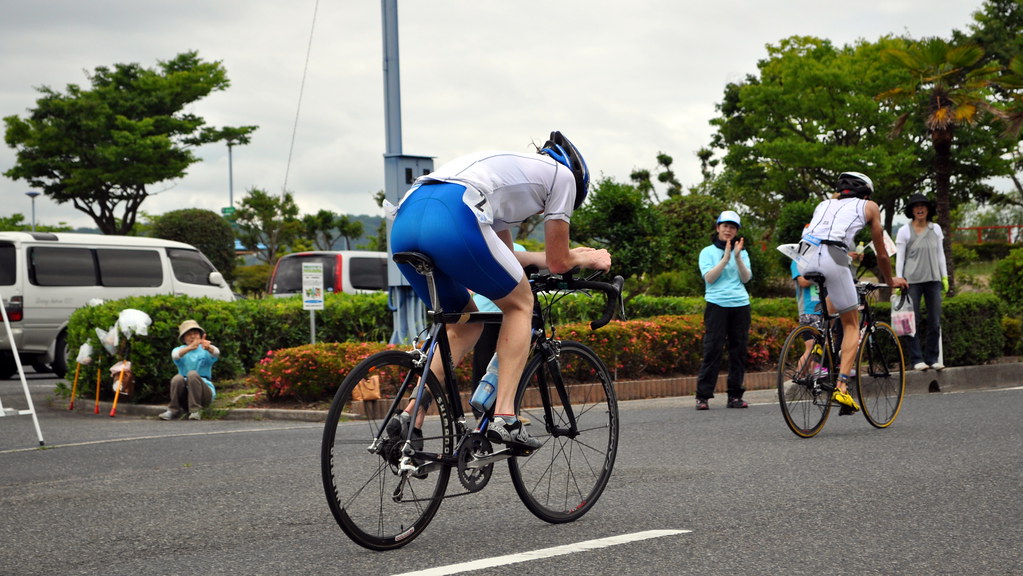 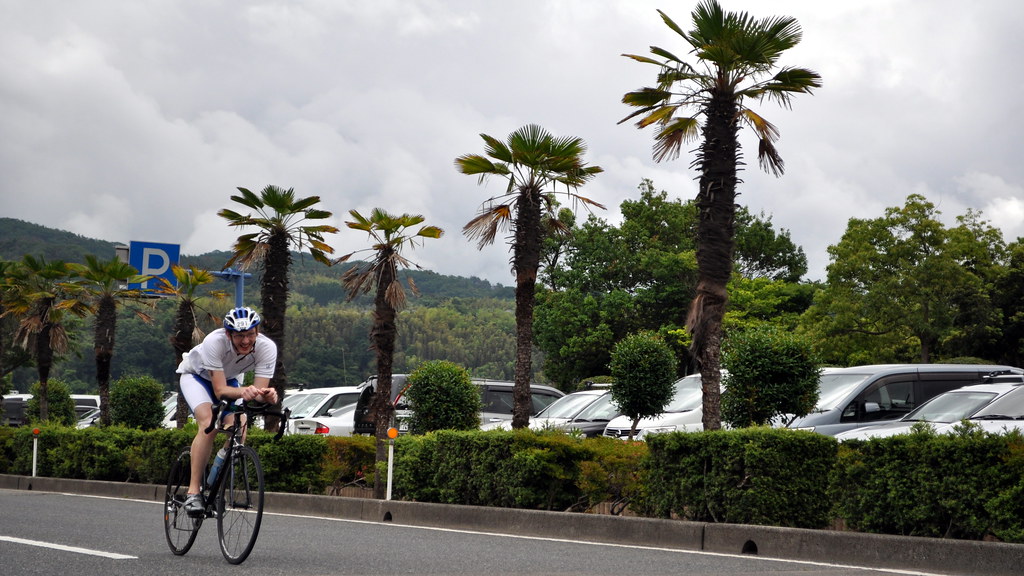 T2 : Remembered to remove the shoe when on the bike, just grabbed my cap. Quite fast one. 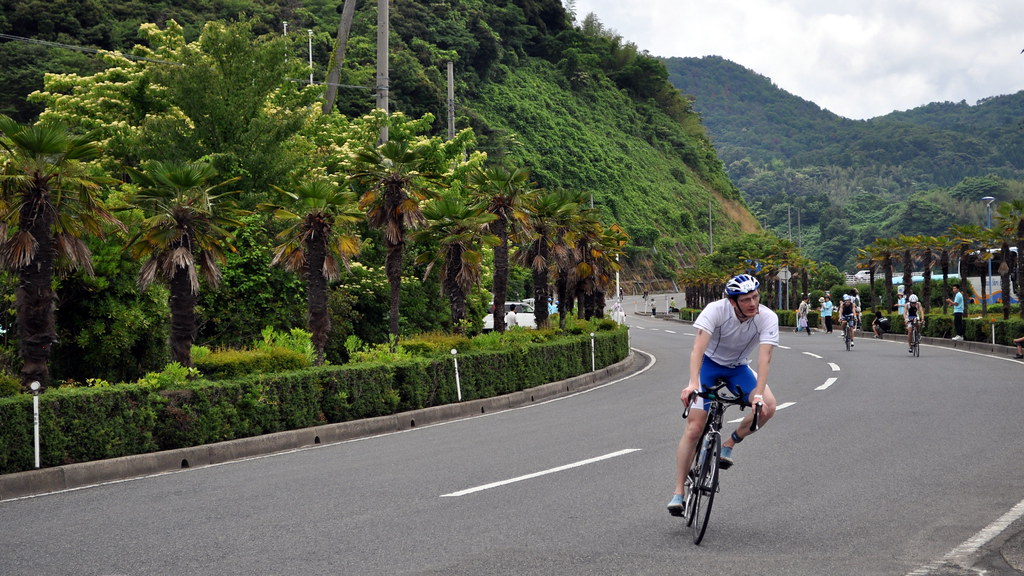 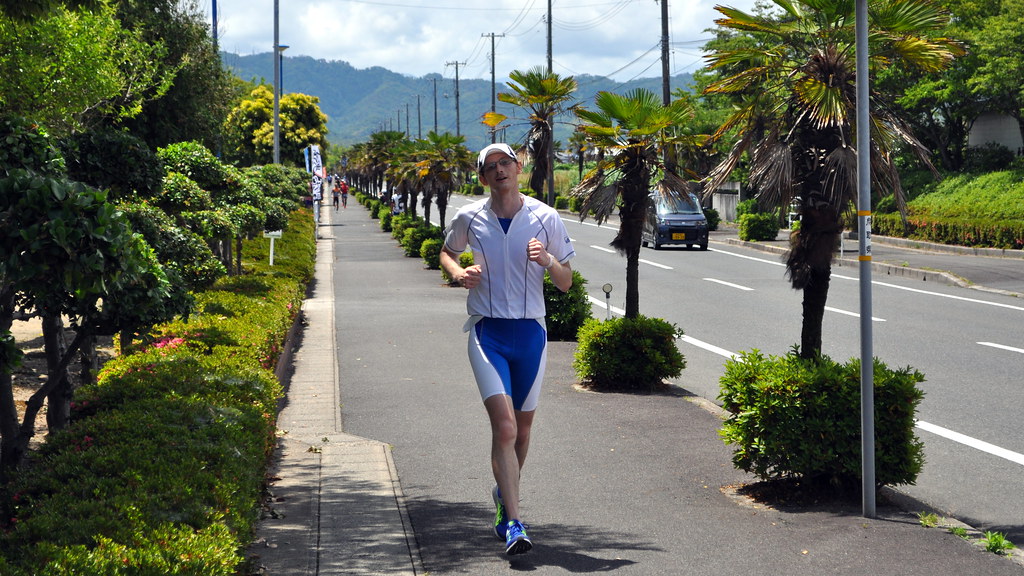 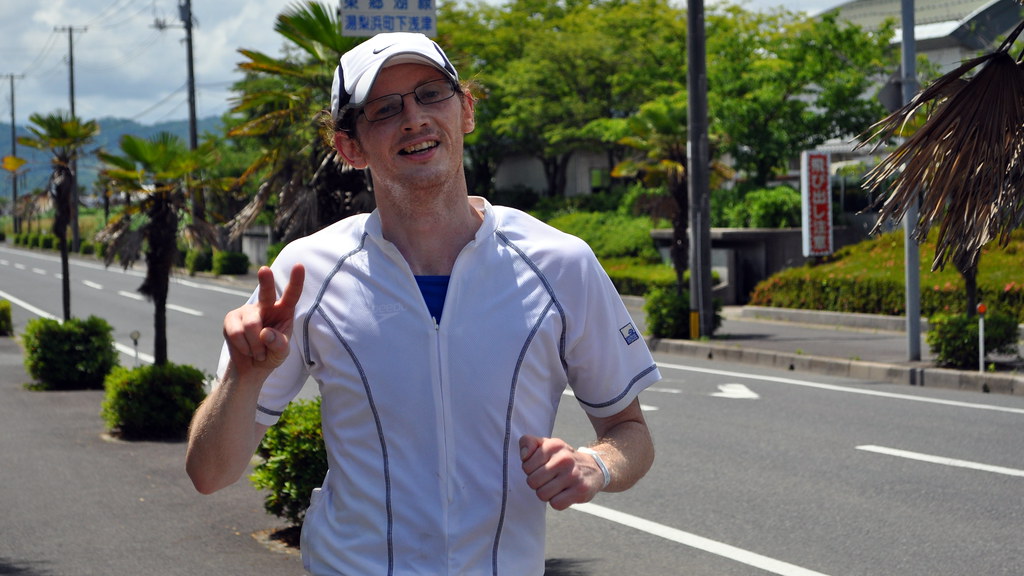 Suffering and smiling, yes I can (not long).

One good thing different though : I lost only one position in the ranking during the run when I lost about 35 places last year. That was better for the mind until the end as I was really suffering from the heat. At least I was not passed. 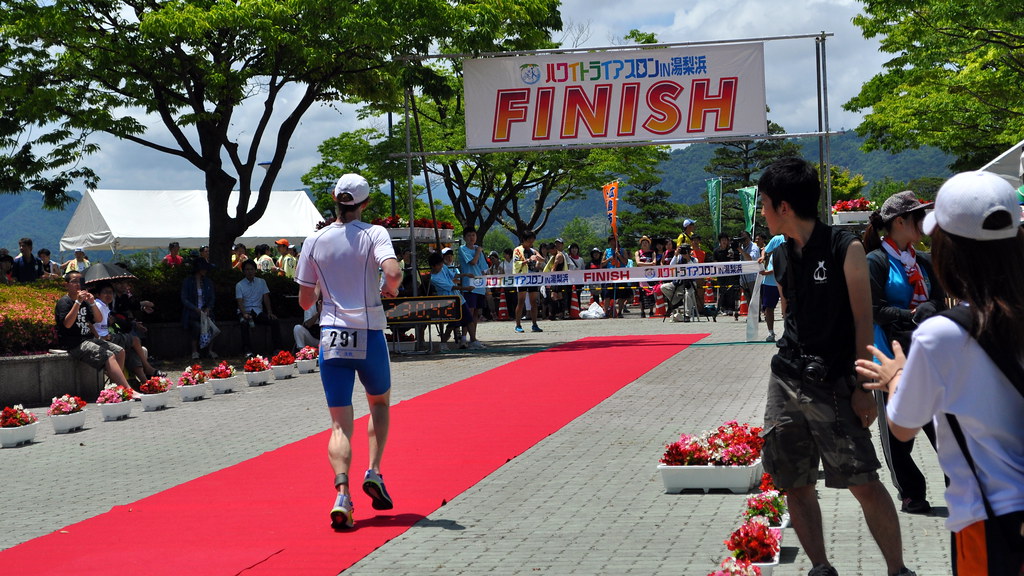 So well, 5 minutes more than last year. Not complaining that's quite normal with the training I had. I have not planned the next triathlon yet. I'll try to find one in September when it is less hot. I am not going again to Sagishima this year mainly because of the heat.

I want to thank all the organizers for this great event and wish good luck to the ones who will be participating to the Kaike Triathlon soon [ironman type distance].
And special thanks to my wife for the pics and support!

Next report will be about the Sea to Summit event organized by Mont-Bell in Hokkaido! I was lucky to be sent over there with some colleagues of the Ecotourism Office in order to promote the International Ecotourism Conference 2013 in Tottori that will take place on October 19-20th and then also to participate to this multi-sport event.Next challenge is the Suica-Nagaimo ( = Watermelon - Long potato :-) 10,5k running race on July 7th.