My second Olympic distance triathlon of the year took place on September the 14th in Kurashiki. More precisely in and around Kojima Boat Race Stadium a bit at the south of the old city.

The place is about 2 hours and a half from where I live and it was my first participation to this triathlon.

Each year until now since 2012, I participate to my local tri in Yurihama and then go for an other one outside of the prefecture (as we don't have an other O.D here). In 2012, I went to Sagishima, in 2013 in Kasai [Hyogo prefecture], and so this year Okayama prefecture. About Okayama prefecture, there is actually a new race that took place a couple of weeks prior to Kurashiki, in Yubara which is just one hour from home. It was the first edition this summer and I did not know about it, I will probably participate next year.

I was looking forward to participate to Kurashiki triathlon as the bike plays a more important part thanks to a hilly course.

A few words before to talk about the race itself. I arrived on the day before to register as required, organization is very good but I really wish they could make this all process shorter as it took all the afternoon. 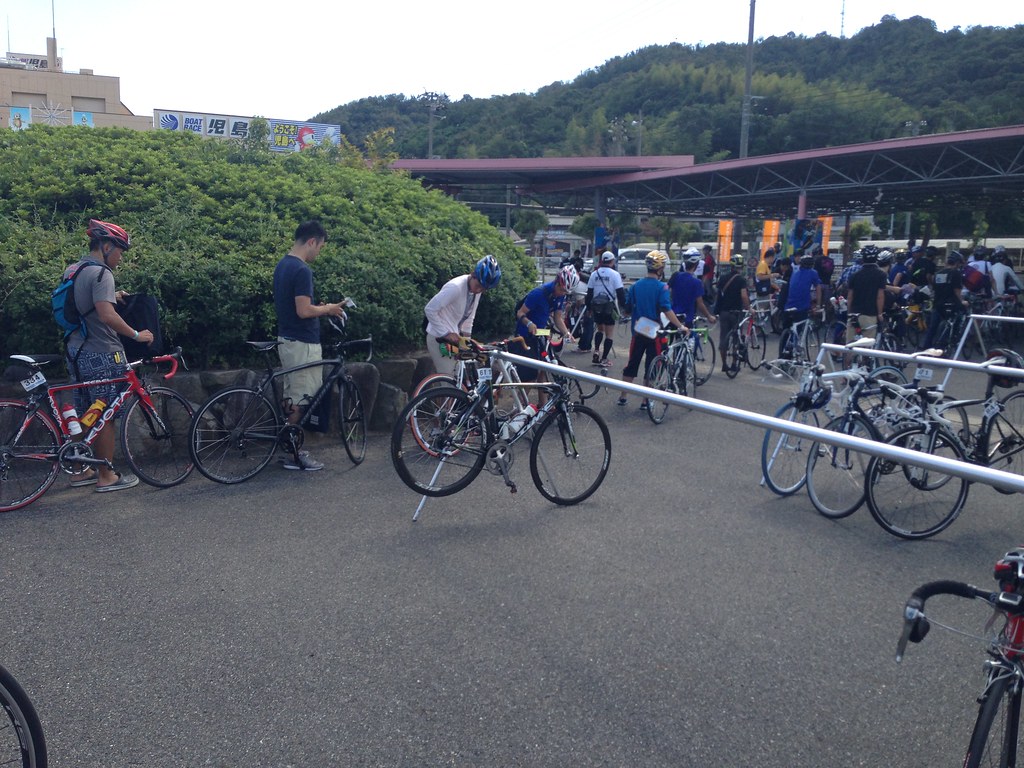 First we had to listen to some information meetings, then registration, then bike check, then a tour of the course by bus and then the opening ceremony which was quite long. 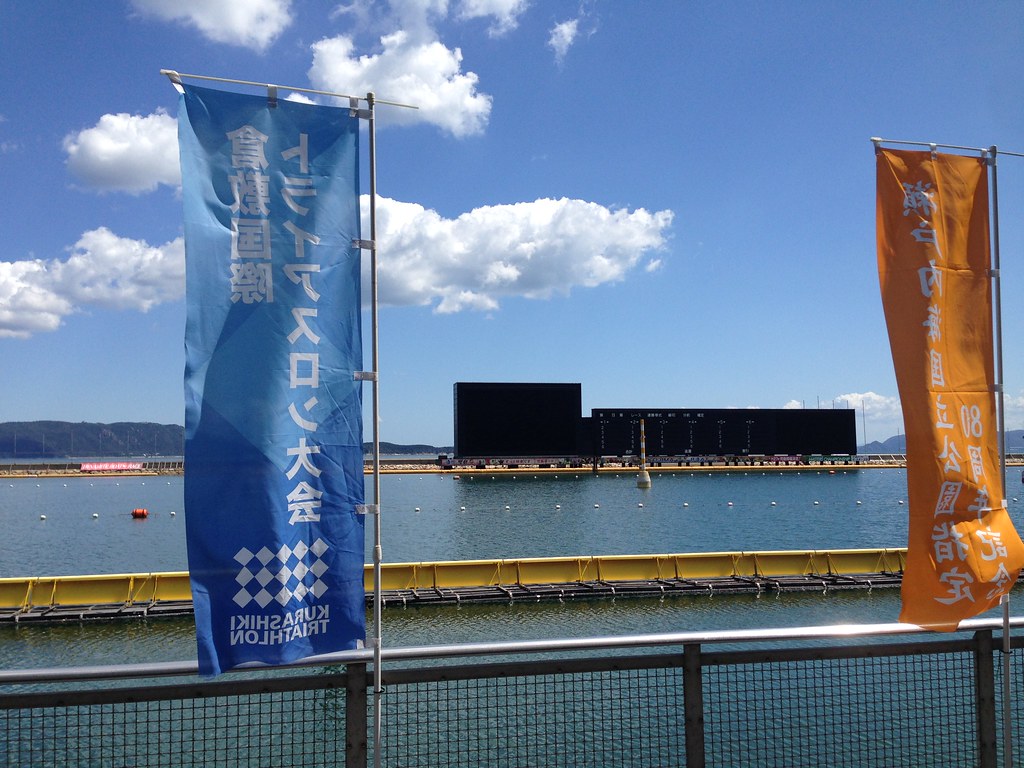 [Arrived early and walked around - This is were we swam] 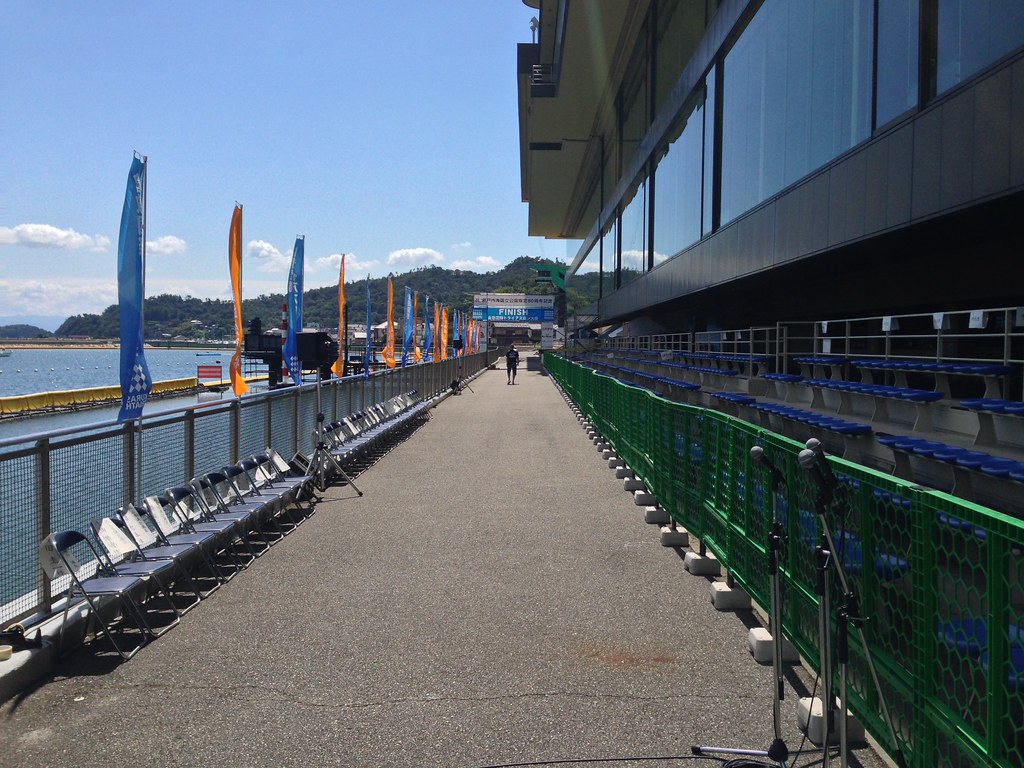 About the bike check : I had to pay 2000 yen for a stamp on a paper... They required a document proving the bike had been checked by a cycle shop (1st time is I saw that btw). I don't have a cycle shop so close from home so I did not have the paper checked. They asked me to bring the bike to a special booth so it was 'checked' by a professional. This was really bullshit as the guys did absolutely nothing and just stamped the paper with their inkan and asked me for 2000 yens. When you think I already paid the entry 17000 yens I was a bit angry with that. I will probably send them a letter about that.

That's really my only complain about the race because everything else was really good. For example they brought the first timers on this triathlon by bus to see the bike course. 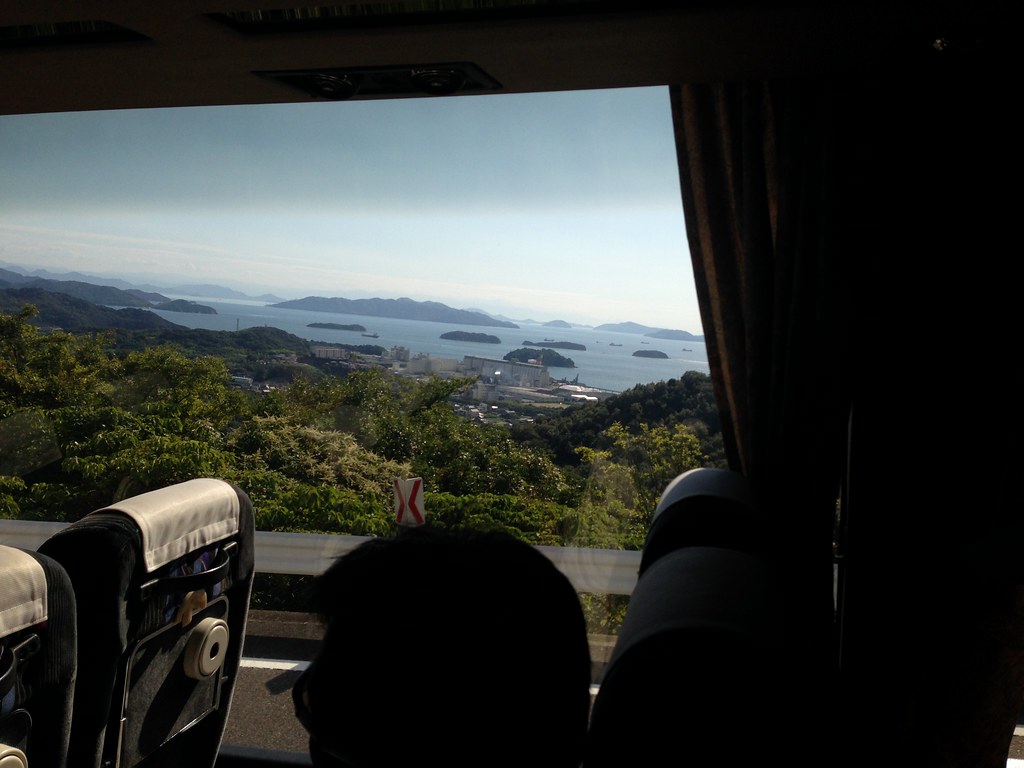 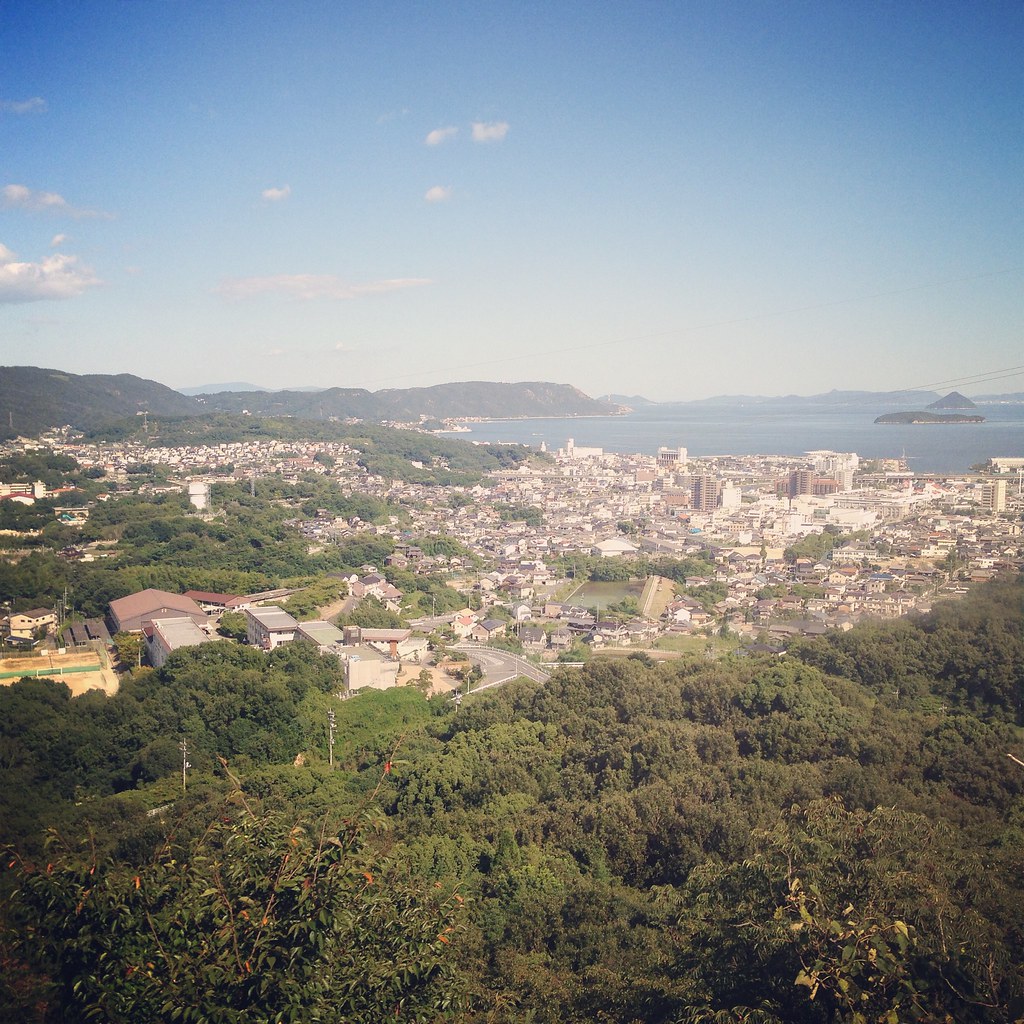 With more than 500 athletes it's quite an organization. I realized the course was even hillier than expected with only about 5k flat out of 40k. "Funny" thing they put some tatami in some downhill corners in case riders missed the turns. I would not like to hit a vertical tatami at 40kph or so :-) [See at 1:05 in video] 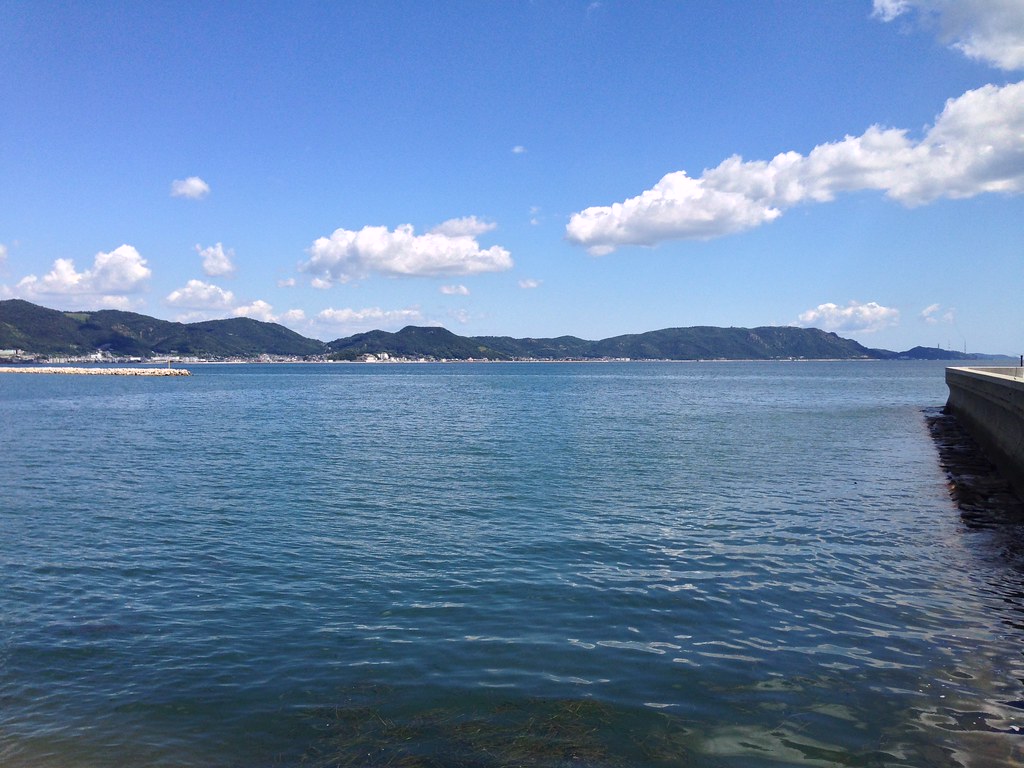 Then in the evening I went to dinner to a family restaurant and went back to the parking of the Kojima Boat Race Stadium where I spent the night in my tent. I was the only car in the huge parking and thought the security guards would kicked me out but no. Well in total darkness it was not easy to spot my tent either :-) I won't do it again though... 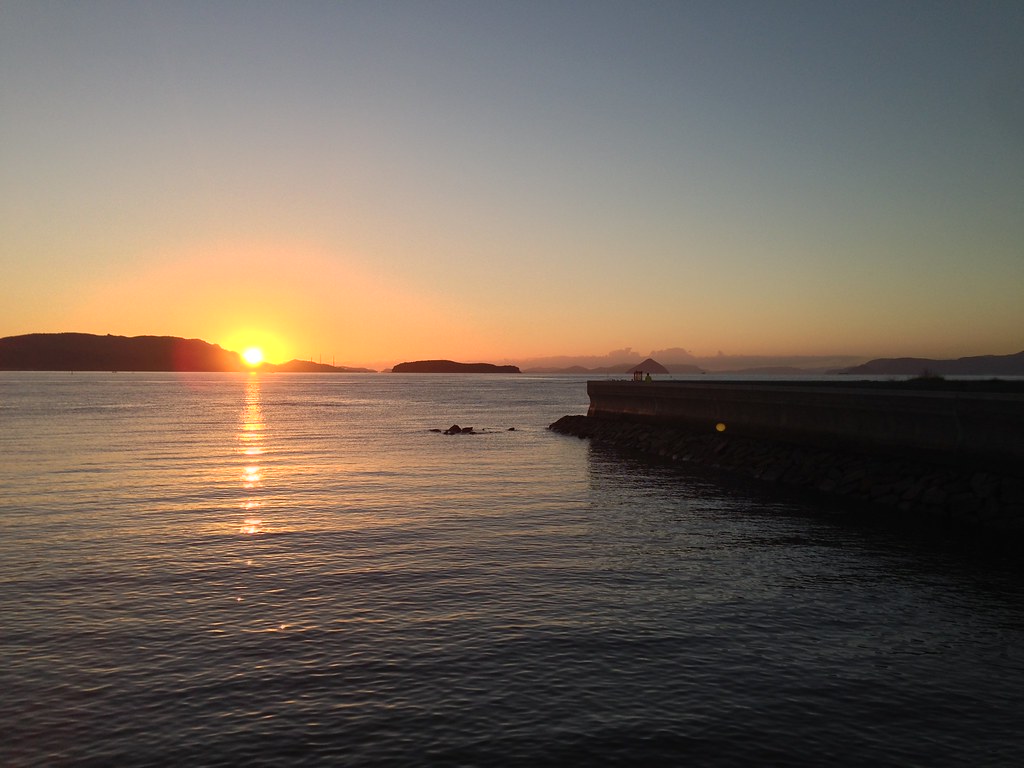 I did not sleep very well as it was quite noisy around unfortunately... At 5A.M I was up and ready to start the day. 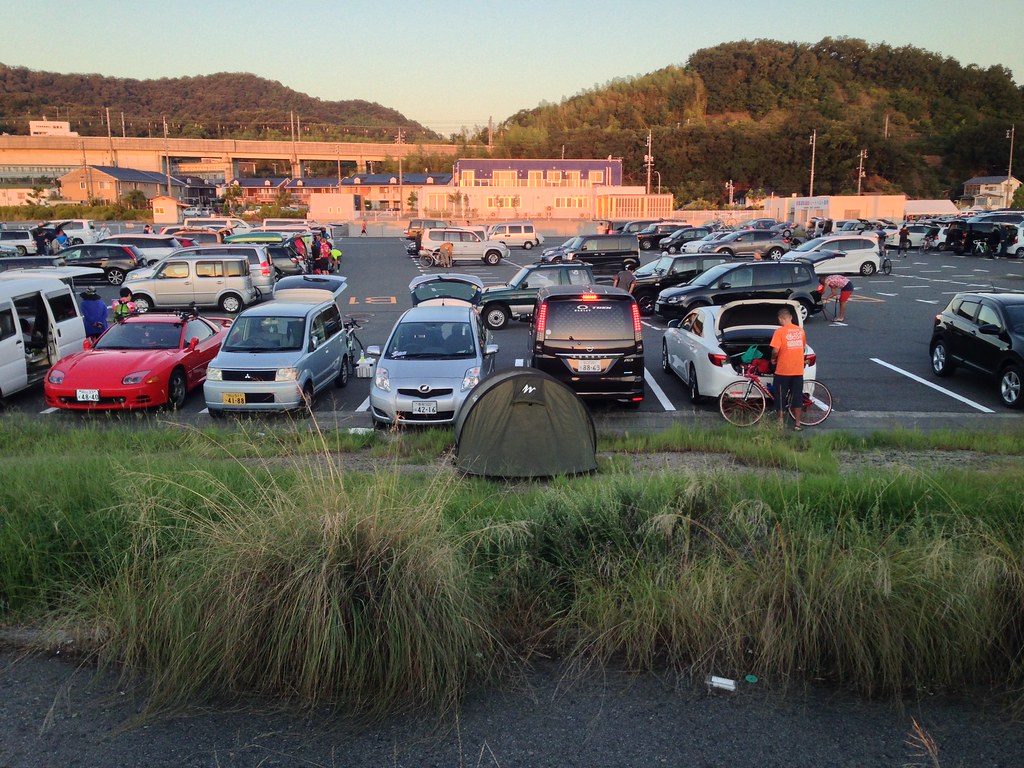 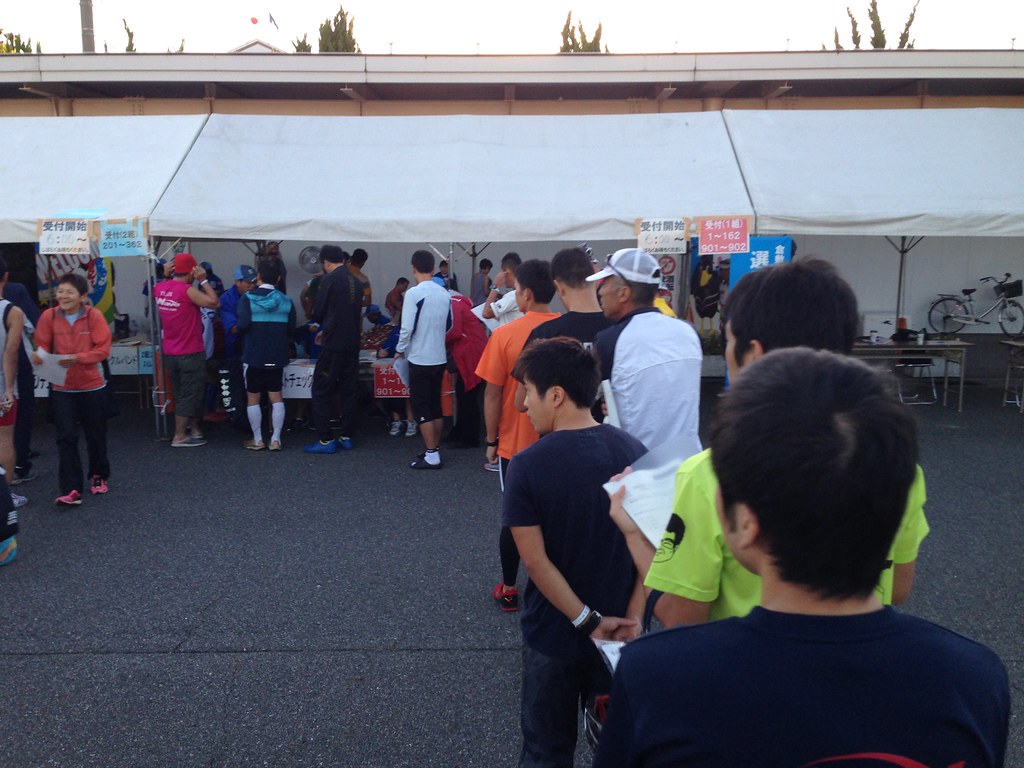 [Getting the time chip]

One of the great thing of that triathlon is the swim. It takes place in the boat race stadium and it's perfect for a triathlon.

It is sea water, deep and absolutely no waves as protected. The course was in a shape of U to swim 2 times. We were divided in several groups, maybe 4 or 5. I was in the first group with about 170 other athletes. I think the groups were made by levels (we input our 'personal best' times on the web form at registration).

Weather was perfect it was going to be a good day to race. 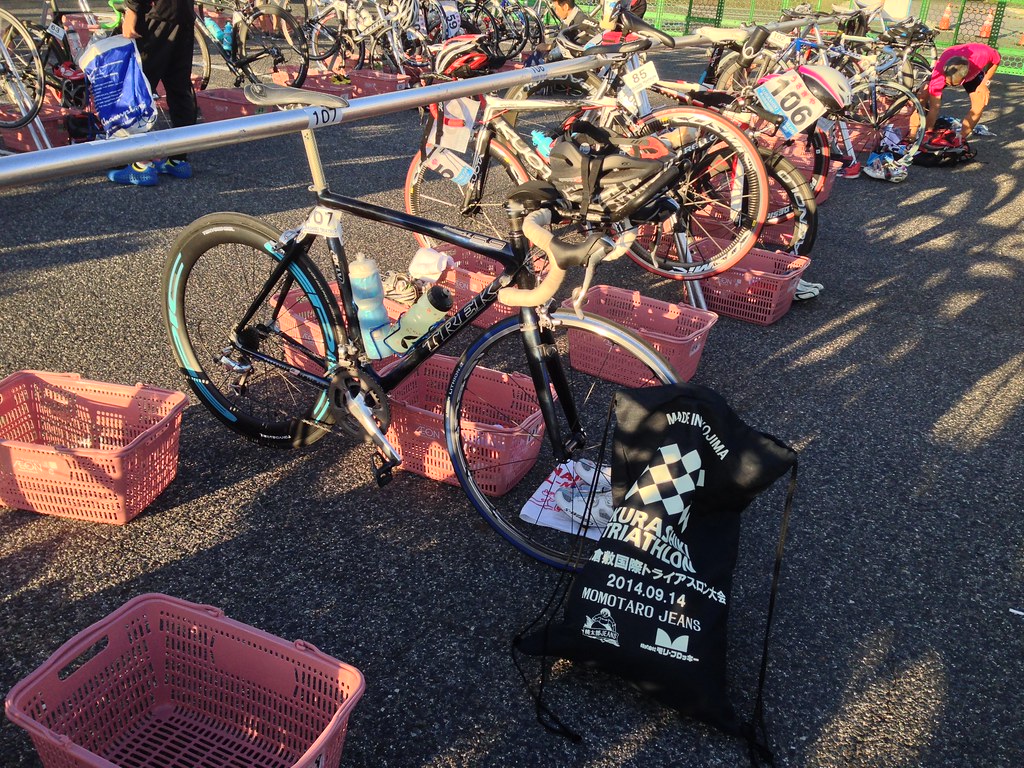 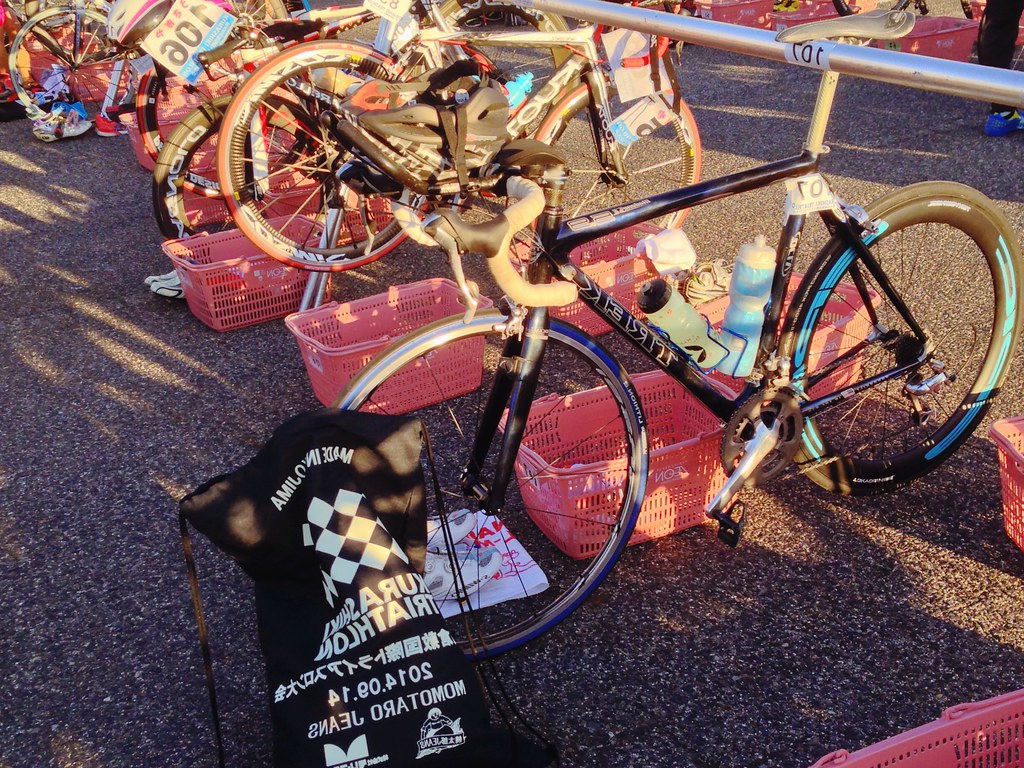 We started at 7:51. The swim was quite ok, it felt a bit long as usual for me. From the stadium to the bikes park we had a long transition : steps out of the water, going across the building, crossed a street and then the bikes park. On the way I caught my glasses that were waiting for me on a table, nice touch during races here.

I arrived at my bike and checked the time on my counter : 8:17, wow, better than I thought but I wondered if my clock was maybe few minutes late :-)

Transition was quite smooth and quickly I was on the bike, no problem with the shoes this time...

Official swim time : 26:56 and 59/526 finishers. It is exactly what I was targeting in matter of time, but it was better than I thought to do in matter of position. If we look at the results I am not too far from the top finishers times, even faster time than 3rd and 4th overall finishers! (That shows the importance of the bike part during this race).

We started with about 2k of flat and then already some climb. This first one was not too steep and I could keep the big ring.

Then a downhill, again few k of flat crossing a fishing port and then from there it was all ups and downs with the main climb to to ride 2 times. Something to mention : it was forbidden to use the aero bars during the main part of the bike course, wether downhill or uphill. 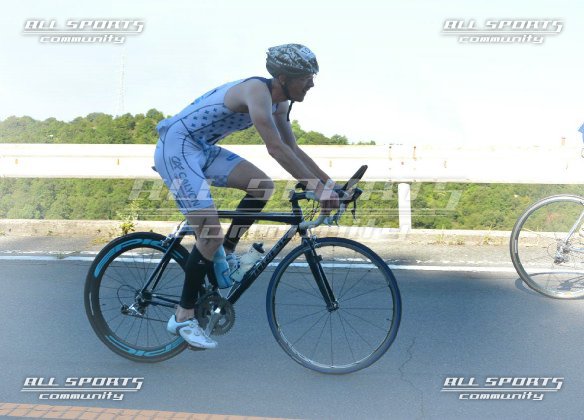 At the first u-turn I noticed the 1st athlete was far away from his followers already. In fact he will win (again) despite being 47y.o!! I had a talk with him after race as he sat next to me, it turns out he is a previous national champion of duathlon. He said he was not a good swimmer but this course was good for him. Indeed!

As for me I could count I was between 40 and 50 but with different starts for the swim there was obviously more faster people to count. 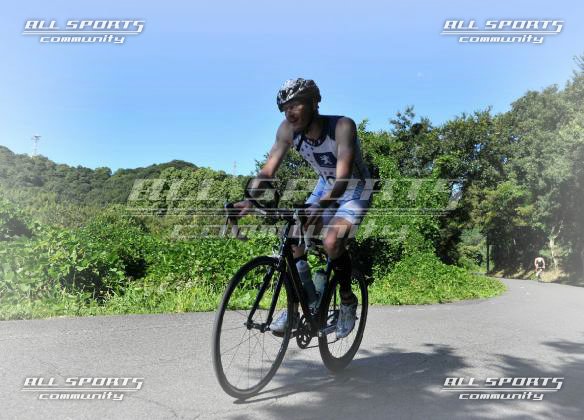 I did not train a lot the 3 weeks previous the race so I was a bit worried to burn energy too fast. But I kept a good pedaling cadence so I did not make lactic acid. A hilly course was actually better for me as opposed to a flat course which would have required more power.

In terms of time it was surely my slowest olympic triathlon bike part with 1:18. Counting T1 and T2 with it, my time is 1:22:54, 47th/526. Not so great but I could reach then the 39th place of the race. Of course I did not know then but when I arrived at the park and saw not so many bikes it gave me confidence. Also during the bike with the loops I could see I caught some athletes.

T2 went smoothly too, it was a bit hotter now with a good sun. (During the bike we were often protected from the sun by the forest).

As usual first steps were a matter of position adaptation. I felt I had still some good energy this time (I drank a bottle of CCD drink during the bike and a gel). 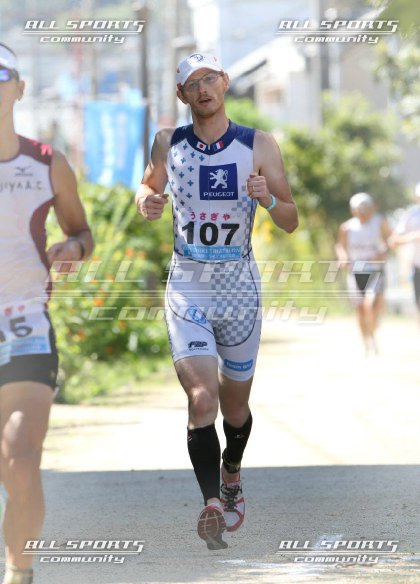 The run is a long stretch in the city, with nice path in residential area, some steps to go through a couple of underground paths and even going through a building. That made for variety! We reached the Kojima Jeans Street (where I bought a pair last year after Shodoshima half-marathon). By the way we got the most awesome transition area bags, made of Momotaro Jeans! As well as a smaller jeans bag, perfect to go to the pool. 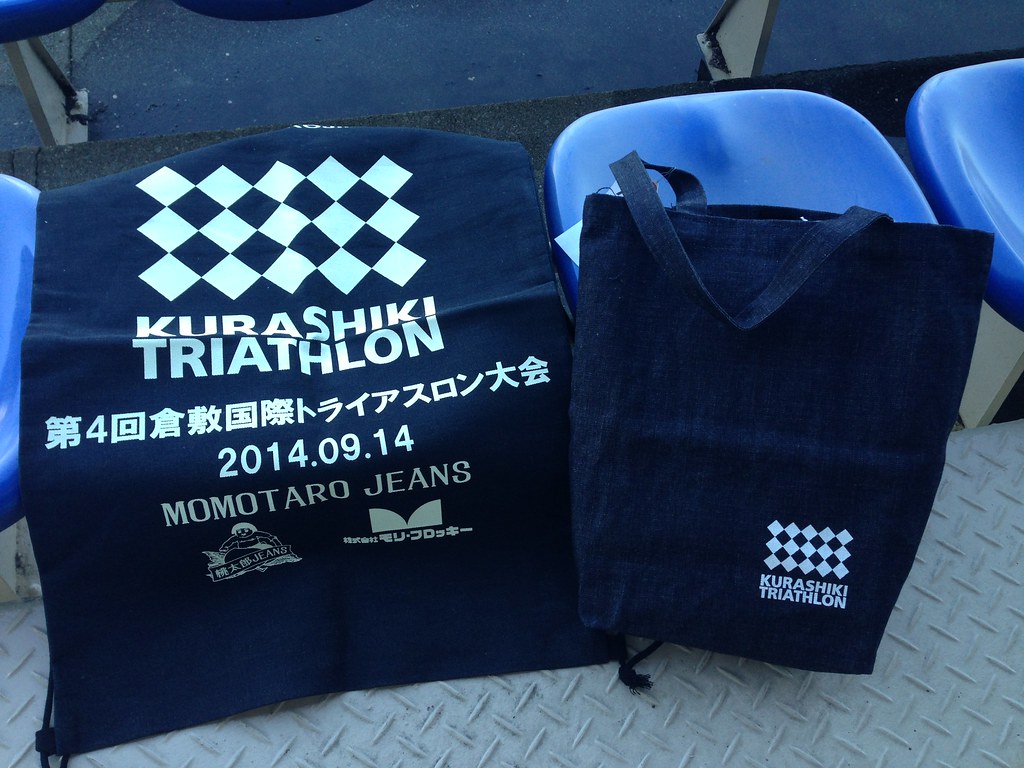 So the 5k mark was just after Kamikaze Attack shop and I started to feel actually stronger than at the start. I caught at each aid booth a sponge and it really helped me to cool down.

I noticed the leg compression socks also kept my legs cool catching the water. An other good point for it. (It was the 1st time I tried them during a triathlon race). I drank a bit also but not that much. 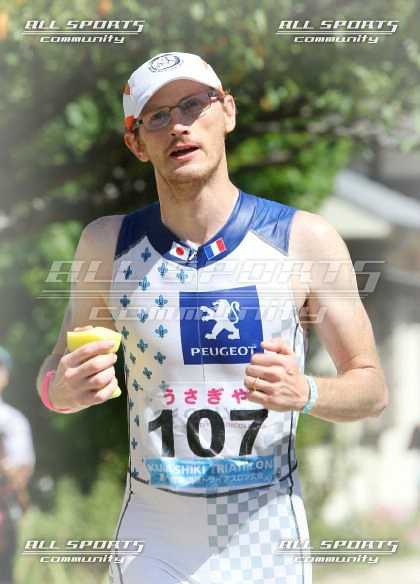 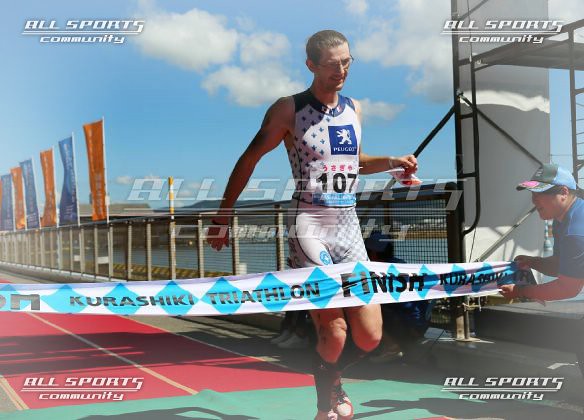 When I saw the results in the afternoon on the net I was quite surprised and happy with that. Even better than at Yurihama triathlon.

In Yurihama I was in the top 16% but this time it was a top 7% ! Quite a difference. In fact with the bike part taking half of the time it makes sense. But my biggest satisfaction was not on the bike this time but with my swim time (compare to the others) and the fact I could gain places on the run and not lose some. First time in 3 years and 6 triathlons! It took time!

A Friend of a friend on Facebook filmed the athlete finishing just behind me, it turned out quite well for me too :-)

And the triathlon was on U-stream, completely forgot to mention that before to my friends... But I could find an other glimpse of my finish! :

Overall I was really happy with the location, the organization, we had a great weather (last year they got rain), also I did not mention it but the bike course was entirely closed to cars : very good point. So yes I definitely recommend this triathlon! 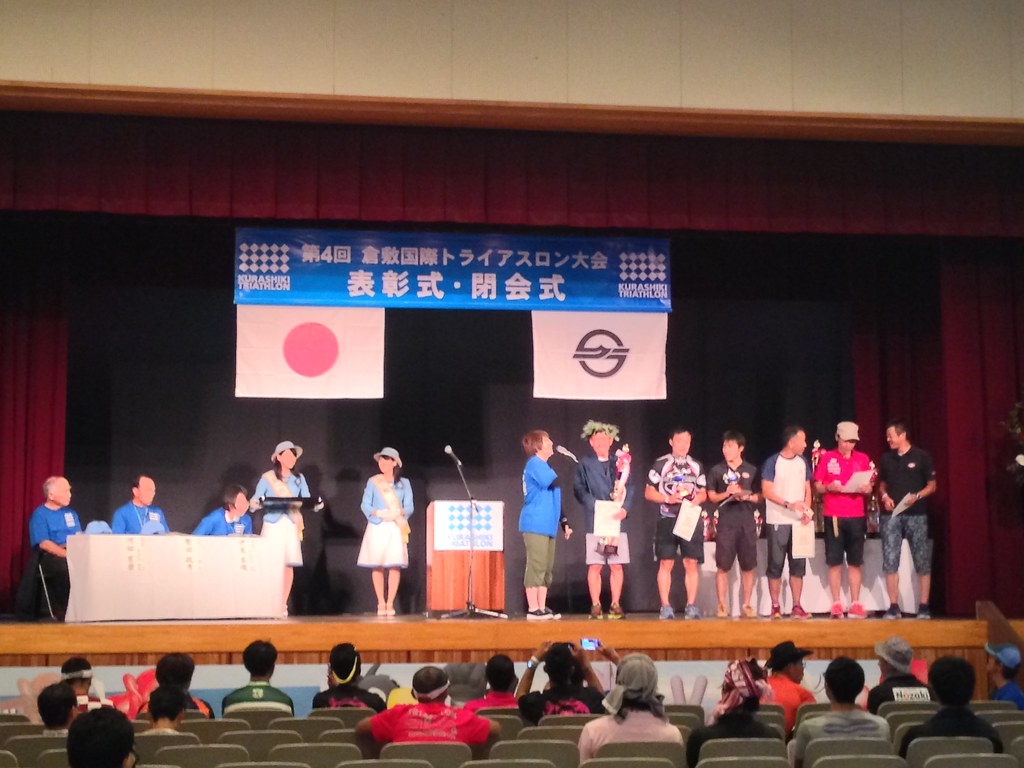 To finish with, that was also probably my last triathlon on my old Trek Madone. I got trouble with the derailleur hanger this summer and can't change it in Japan. So yes, time for a new bike, more soon on that but you know already if you follow me on instagram :-)