This is the race report for the Hawai Triathlon in Yurihama that took place one month ago... better later than never.

So here we are, the regional Olympic Distance "World Championship"! 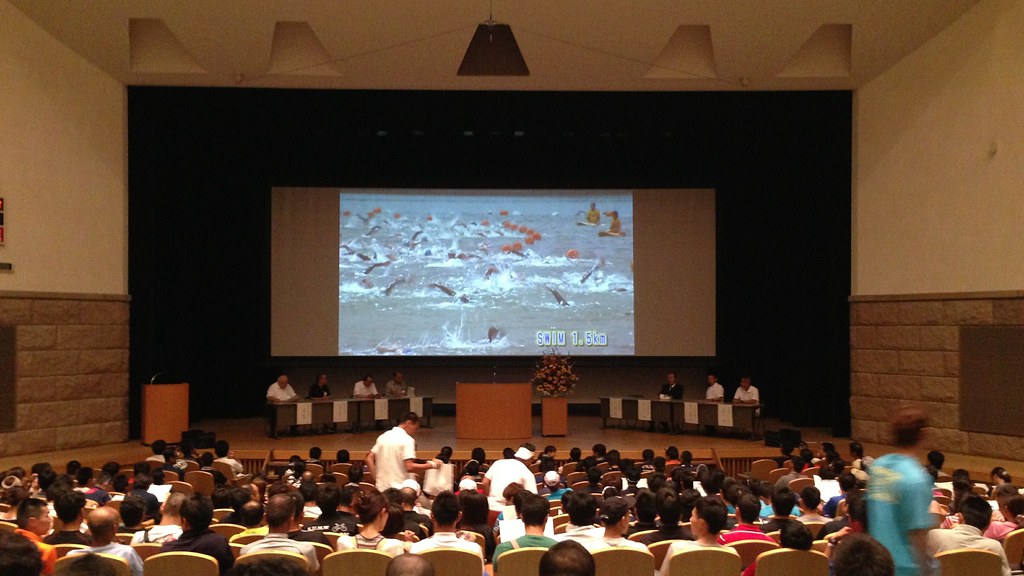 The only OD triathlon of the prefecture, closest ones next are in Okayama or Hyogo prefectures. So I am lucky to live just 5k from the start.

That makes also a quite competitive race as athletes are coming from all the neighbor prefectures and even as far as Tokyo or even Okinawa this year!

As a matter of a fact it was also a selective race for university students and a huge team came from Hiroshima, it looks like they are taking triathlon seriously at their uni.

As usual we had the briefing meeting on the saturday at the Aloha hall (yes this "Hawai"/"Hawaii" things is pushed quite far, we have palm trees around and the officials of the city wear Hawaiian shirts and greet us with a Aloha etc... You got the picture :-)

Nothing special at the briefing, usual speeches and rules reminder including the cute one : "don't forget to have a bell on your bike."

Early wake-up, usual breakfast, I just add a banana and start to drink from time to time, sip a gel also in the last hour.

As planned, it's raining but not hard, not warm either : perfect I am thinking. I am probably one of the few thinking that. Until now for all my 4 triathlons in Japan I suffered from the heat during the run and never did better than a poor 47 minutes/10k. Quite frustrating. This time I have better hopes. 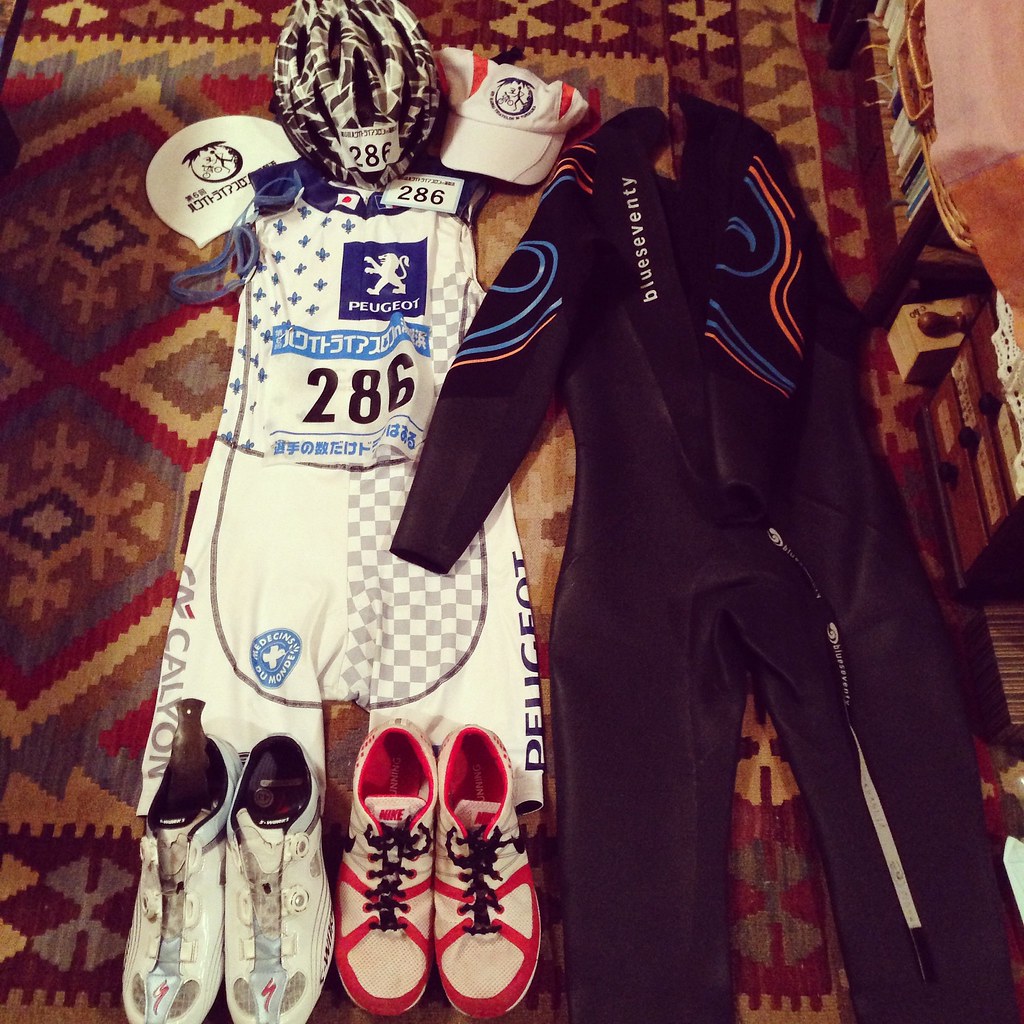 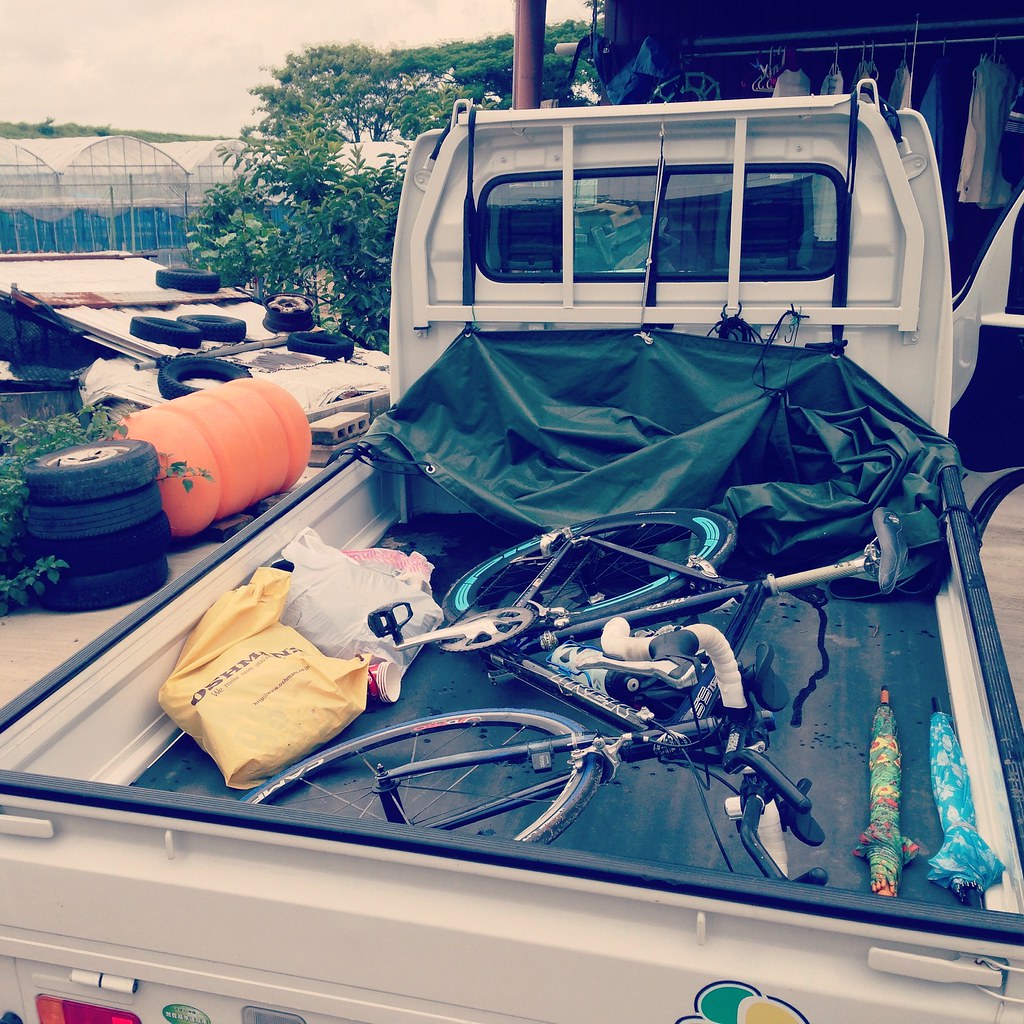 On the left : traditional packing pic and on the right my way of transportation of the day : as it was quite raining, I prepared the bike at home and put it as it in the K-truck, no need to mount the wheels and pump them under the rain at the parking. (pic was shot once back) 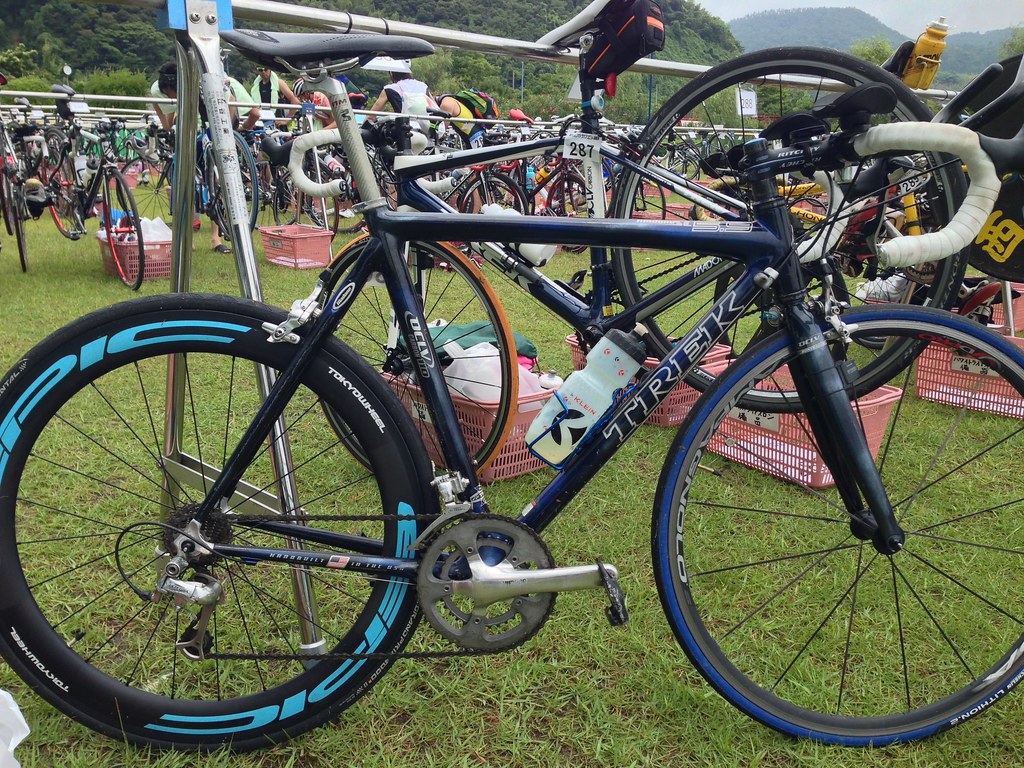 New rear wheel from tokyowheel.com, more on this in an other post. 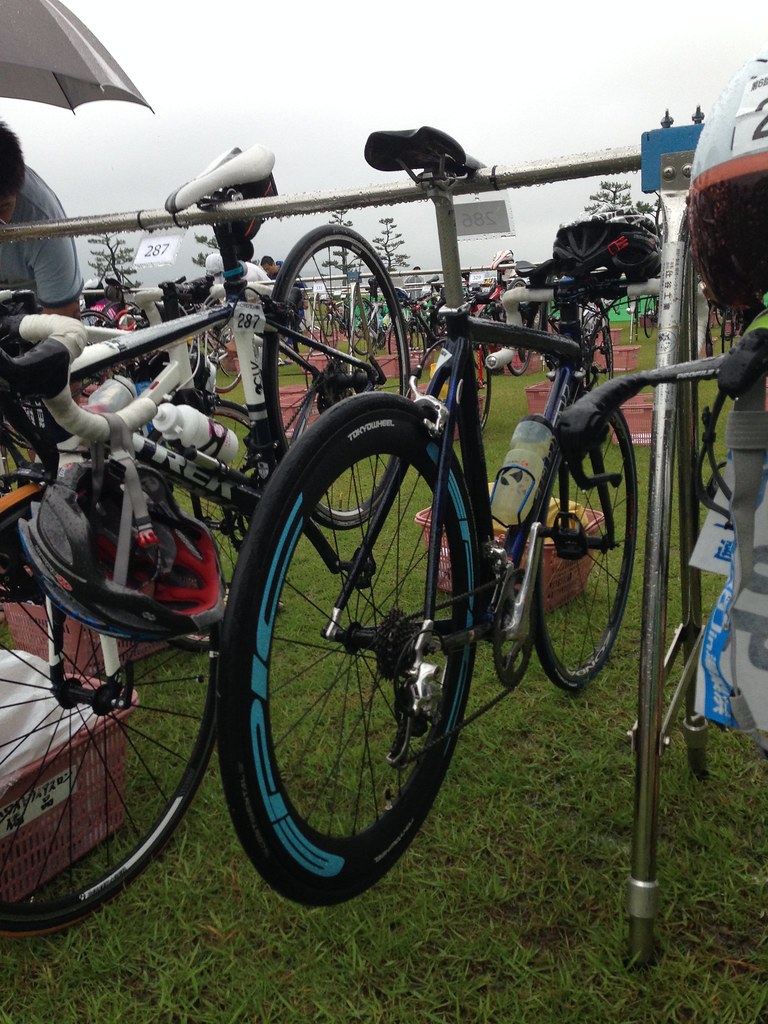 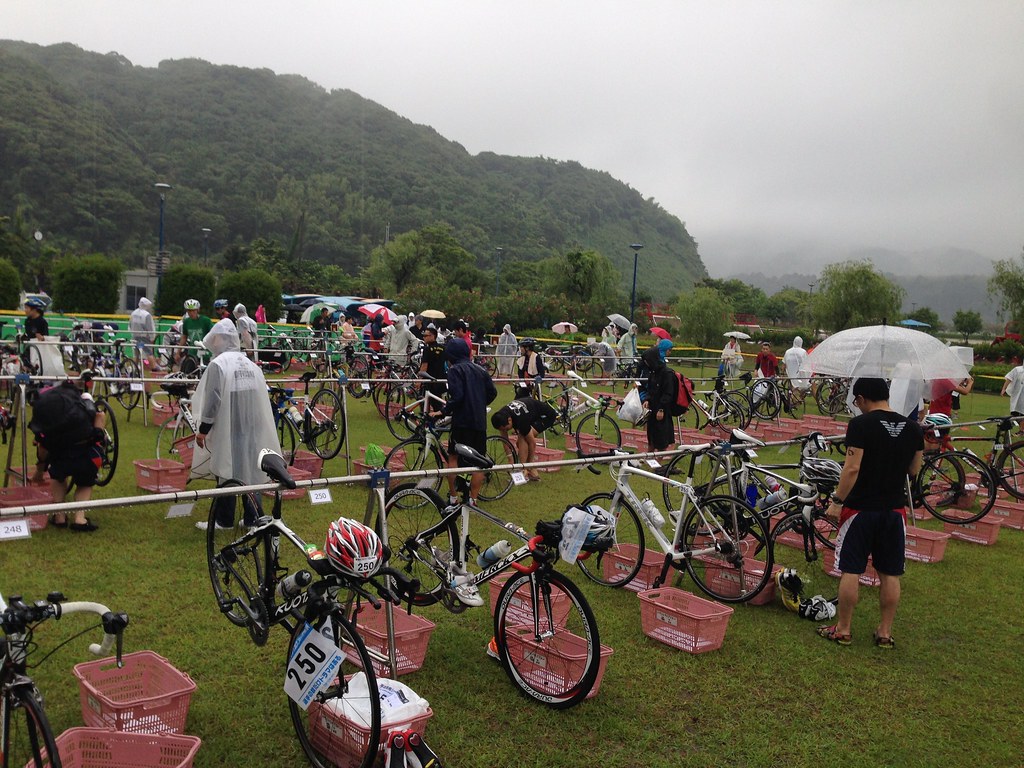 Once the bike and stuff are in the park (bell is checked by referees :) we are waiting under the roof of the tennis courts, slowly starting a dry warm-up before the swim, activating the legs and arms. 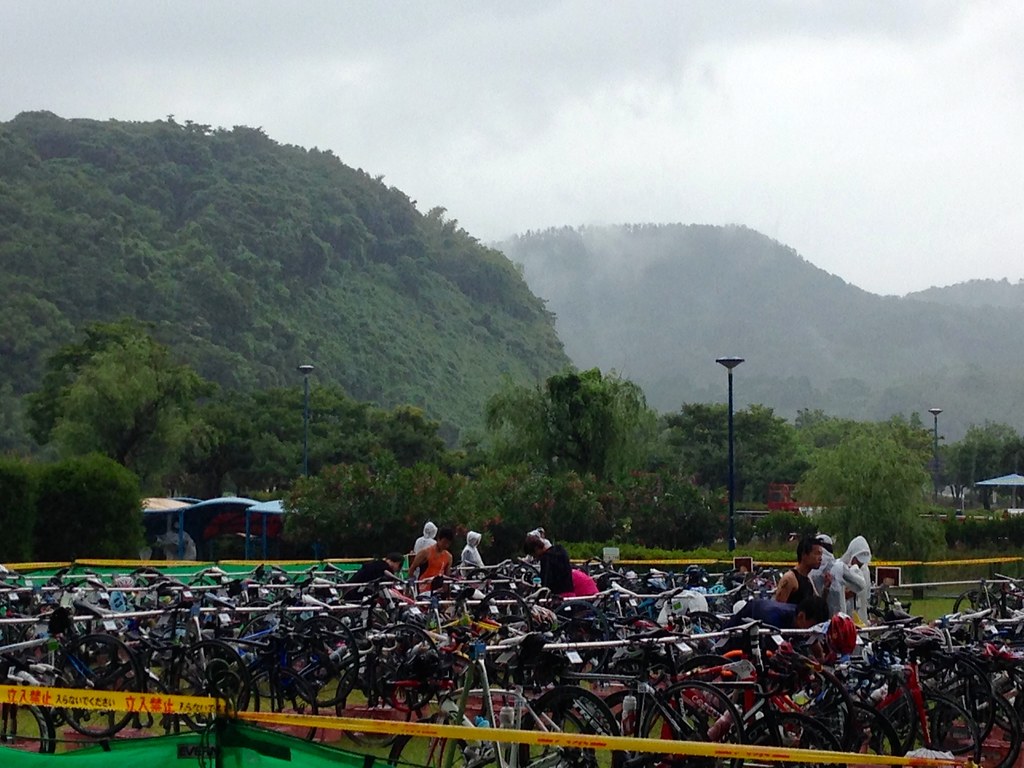 In the right back you can see the hill we have to climb 3 times, not so high, about 45m but a good one. 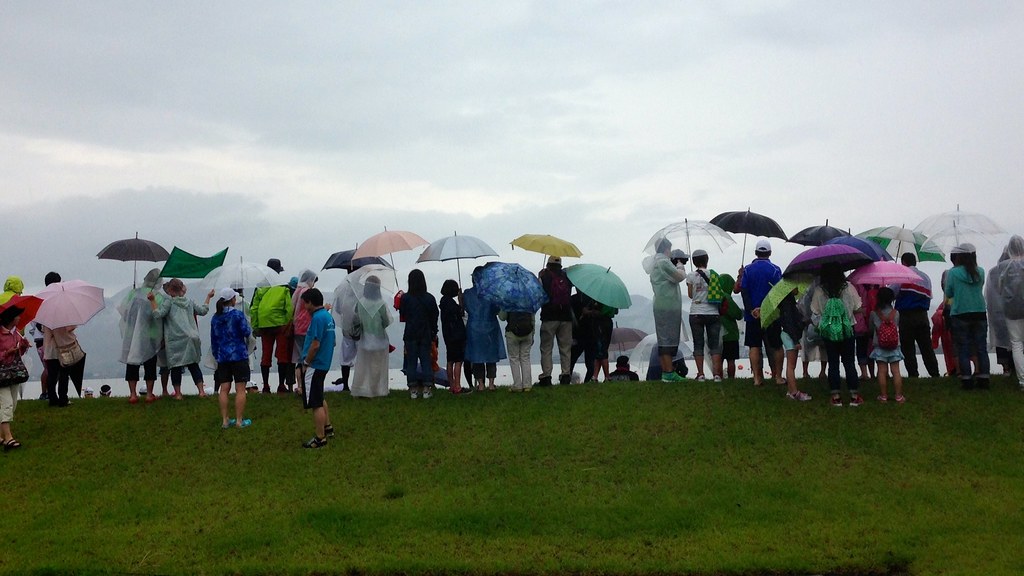 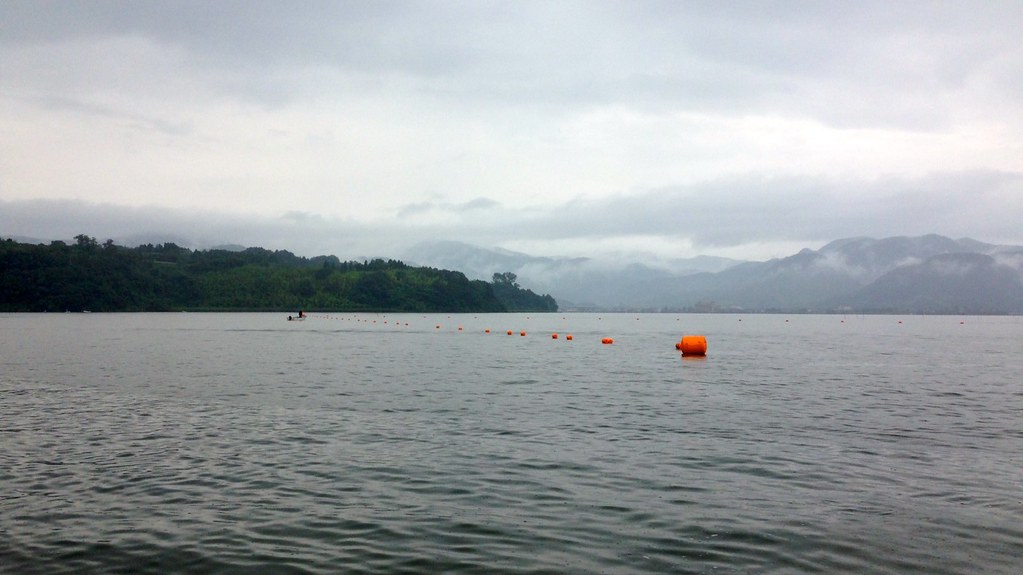 Then it's time to test/taste(?) the water. The lake temperature is really fine, really easy to go in with the suit.

The volunteers did a great job also at cleaning the lake the days before from any fishermen remaining stuff (hooks etc...). 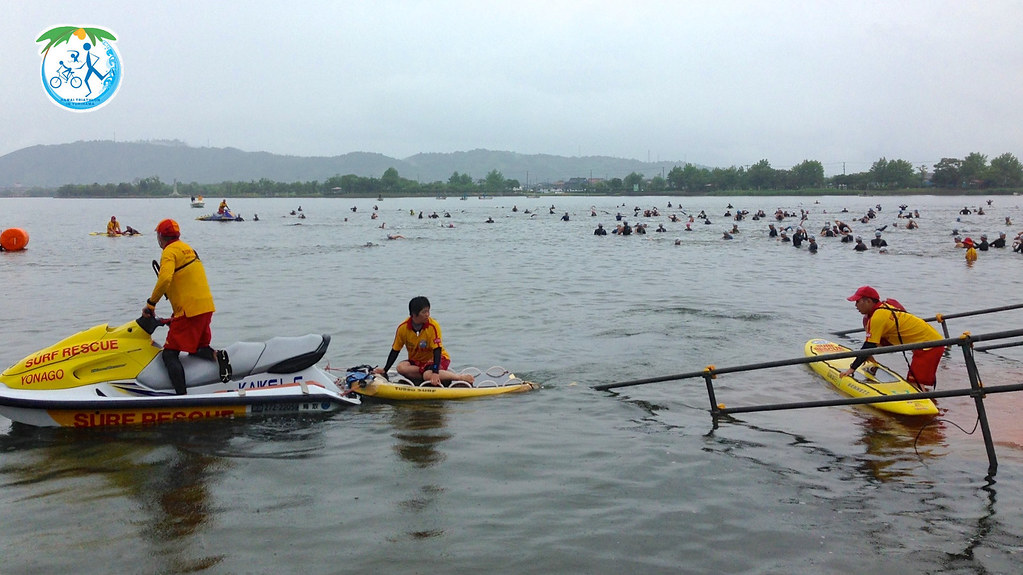 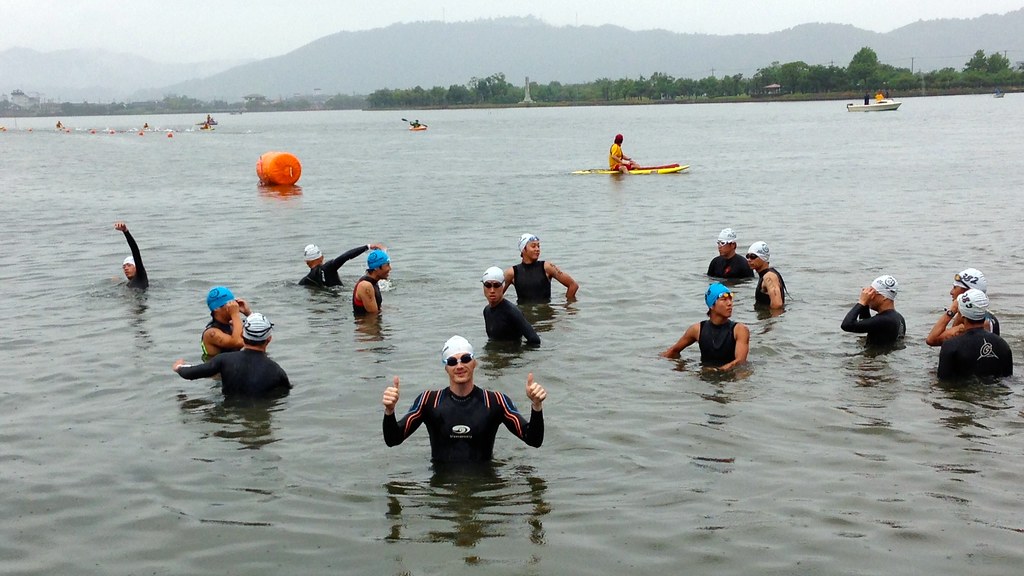 Yep, it’s not very deep around the start. But it’s getting better then. 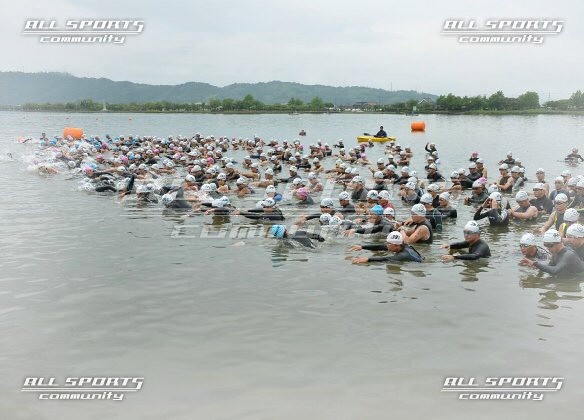 The swim course is the same as last year : a triangle to swim 2 times with a short jog/walk at the half.

This year too I chose to start a bit on the left side : farer from the first buoy but should prevent from any battle.

At 9A.M the start is given and rain seems to disappear during the swim.

I missed some sessions for the swim in the previous weeks so I am not as confident as I would like but I feel ok. My goal is a modest 27 minutes. That's what I did in the pool few days before. 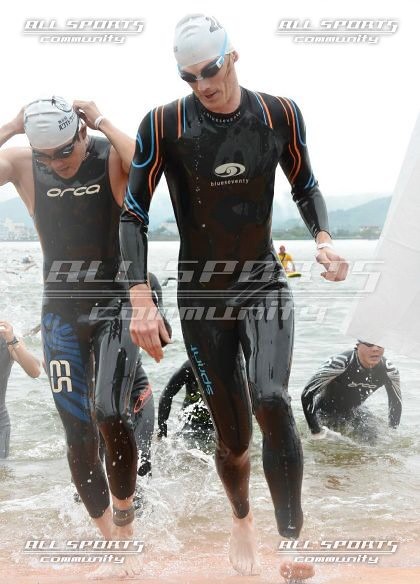 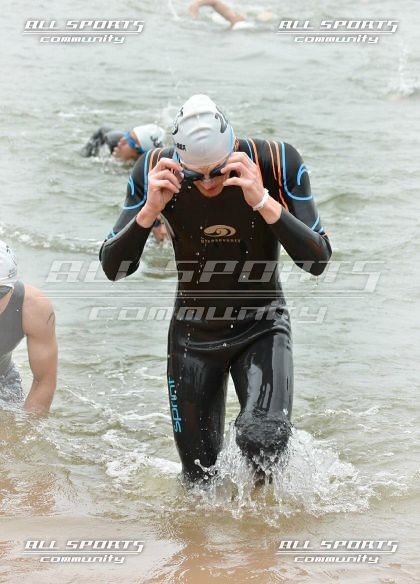 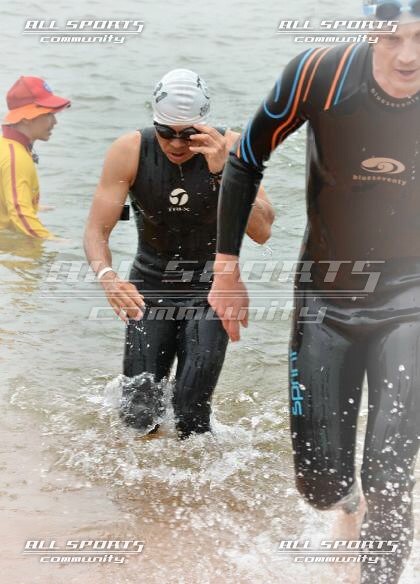 As planned no battle, I have a quite smooth swim all the way, at the half (750m) when we have our first exit I notice the time 13:2X something, just what I expected. The second loop feels longer, thing is I am not comfortable in my wetsuit, I am feeling I am fighting against it when I stroke. My arms and shoulders get tired.

End of the swim, I can see 27:XX at the exit : ok just as planned, I am happy this part is done like this cause a slower time than expected on the swim is always hard for motivation after.

T1 : about 70m to run to the bike, I removed the suit without too much problem, just a short cramp at the right calf when sitting but I don't worry for that.

Now the 'baka'(dumb) Jay of the day : I have some nice cycling shoes but not very triathlon friendly, meaning not the easiest to wear in a hurry. To help I added some vaseline on the border so my feet can slide in : it worked perfectly. But in the process I put some vaseline on my fingers. Next : impossible to turn the small wheels of the Boa cable system to tight the shoes on my feet...Damn, I really can't. I am losing time and patience and decide to get on the bike anyway and try more once on the bike. On the bike I finally manage to lock almost my left foot but I can't tight properly the right one..grrr. OK I give up and now focus on the ride. This is far from perfect but I can pedal and it's time to catch some time back.

The road is wet but it's not raining anymore, temperature is ok.

We have 3 loops of the lake to ride. I know the road perfectly it's my "home trainer", rode it more than hundred times...really. 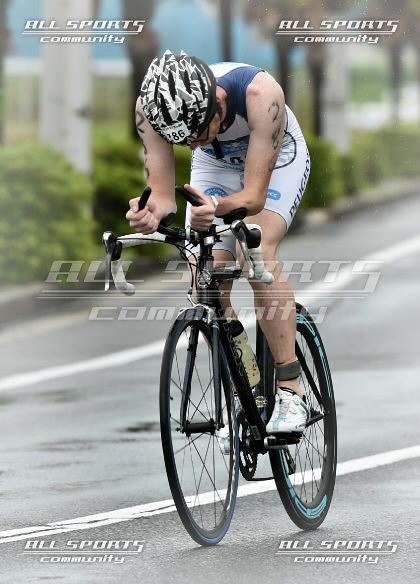 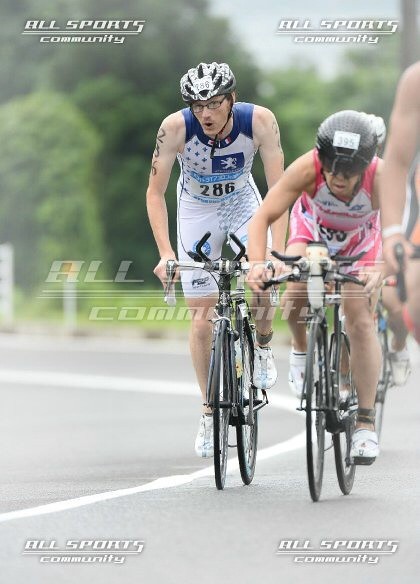 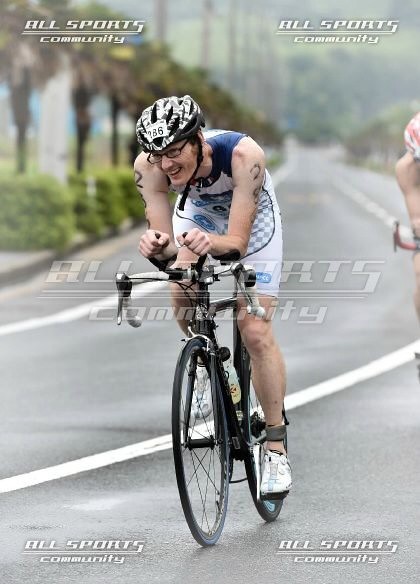 Pic of the middle is from the climb in its last meters where it is the steepest.

Despite the time I lost with the shoes I finish the first loop in 22 minutes and something. My goal being 1h06, I am about in the time. I am battling with a couple of guys, one is one of these students of Hiroshima, the other one is in the 50 y.o age group. Funny thing the student does not even use a tri handlebar (I asked him why during one of the climbs, he said "なれてない” : I am not used to it...) but the 50y.o age grouper on the other hand has a full aero bike, aero helmet and an electrical speed shifter. It turned out the shifter did not work properly and he could not change the speed in the climbs and had to really push the pedal on a big gear...ouch

We tried to escape from each others but never could really separate, none of us got a penalty despite the referees checking us.

I finished the ride in just 1h06. Just few seconds more than 2 years ago but this time I saved some energy and was never in the red. For a change I felt I could run next. No problem to remove my shoes at T2 ... -_-;

Official bike time including the 2 transitions : 1h09'31. 37th bike time and reached position 45 / 300. 25 athletes caught : not too bad. Although almost 4 minutes of transitions... I must improve that...no more vaseline on the cycling shoes… 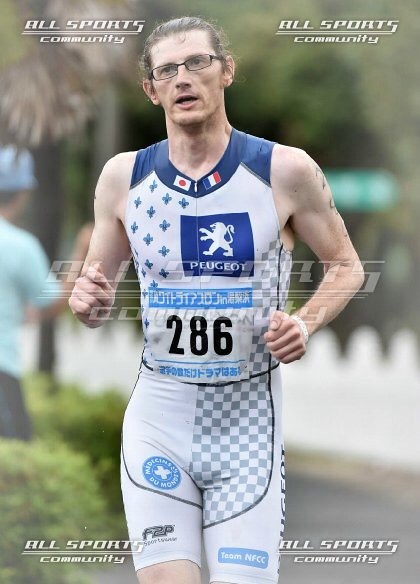 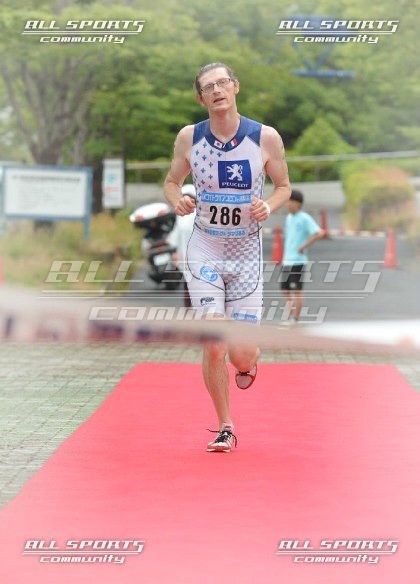 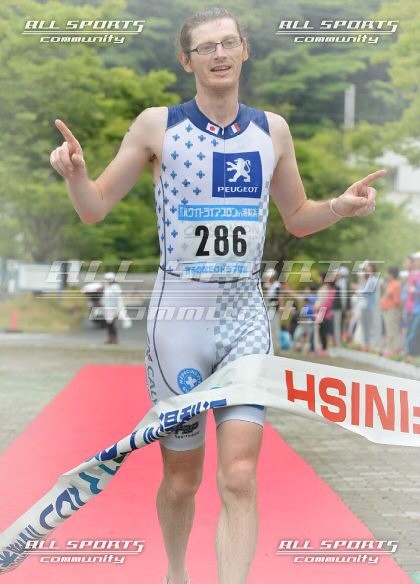 The temperature has slightly rose but it's still good and cloudy (I won't even have a sun burn... yoohoo).

The student was faster than I at T2 and I will never see him again, he had a good run and finished in the top 40.

Then the other age grouper started a bit before me too, I could see him just about 20m away from me.

Legs were ok, small steps and high cadence the first km, time for the muscles to adapt. To my surprise I am catching back my rival of the day. I don't race with a watch so don't know about my pace but I have an indicator : nobody is catching me back in the first kilometers : that's a good sign. Now I stay behind him, still feeling ok but I don't think I can pass him.

At k 4 there's an aid booth where I grab some water and for few seconds only passes my rival :-) He actually thought I was stronger so let me go, but not.

Then we arrived at the u-turn, and I started to feel tired. I know too well this feeling on the run, lack of energy after 2 hours, but this time I really didn't want to give up as my race being quite ok until now. One good thing, I could see the race clock at the u-turn : 1h58:30 it meant I could almost finish in 2h20 which would be my best time by far here.

It's getting hard to follow my rival though and some relay runners (team) are catching us now.

At k 6 my "rival" goes away I can't follow anymore. The last 4 k are a battle against myself. Thankfully only few athletes pass me. On the last bridge my wife is here cheering for me "Go Jay, sugoi!" (She knows I did not lose too much this time on the run), only 100m to go. Goal is reached, a first in 5 triathlons : feeling of accomplishment.

Sure, nothing crazy but 4 to 5 minutes faster than my previous attempts here, that's a huge difference. Also I could almost keep my ranking from the bike.

I consider this triathlon my best one until now though because the field was of a higher quality of athletes this time and more consequent. To give you an idea, 14 students triathletes (age from 19 to 23) of Hiroshima finished before me. Damn students! :-) 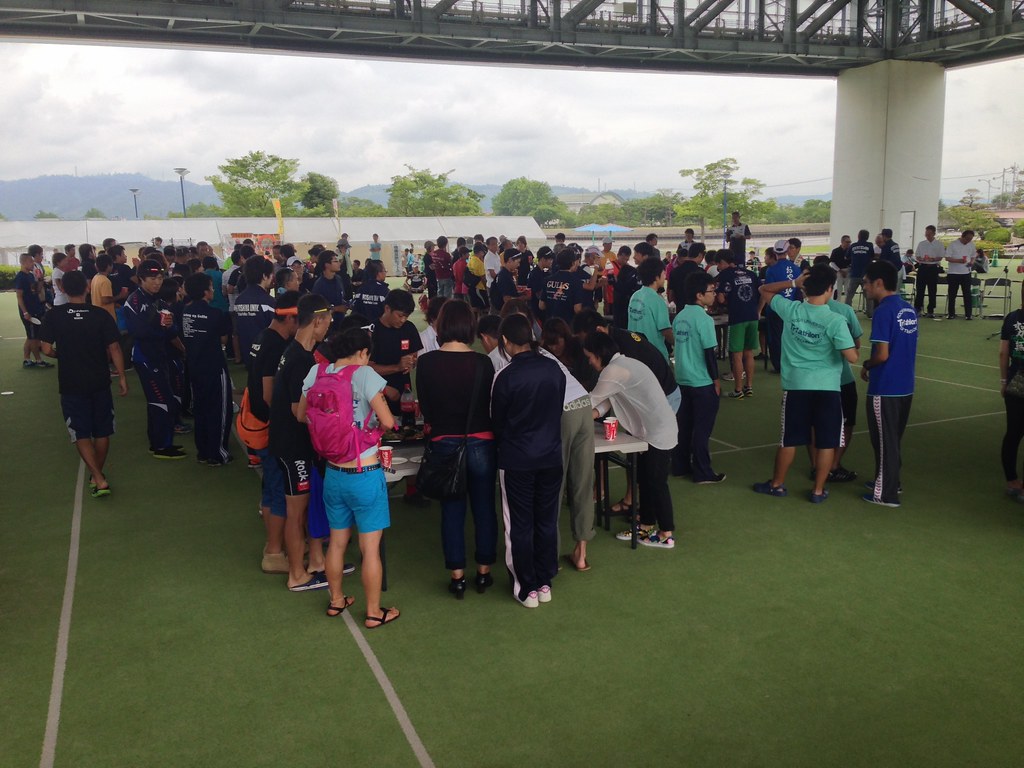 This year I stayed at the after race ceremony (free food people!) 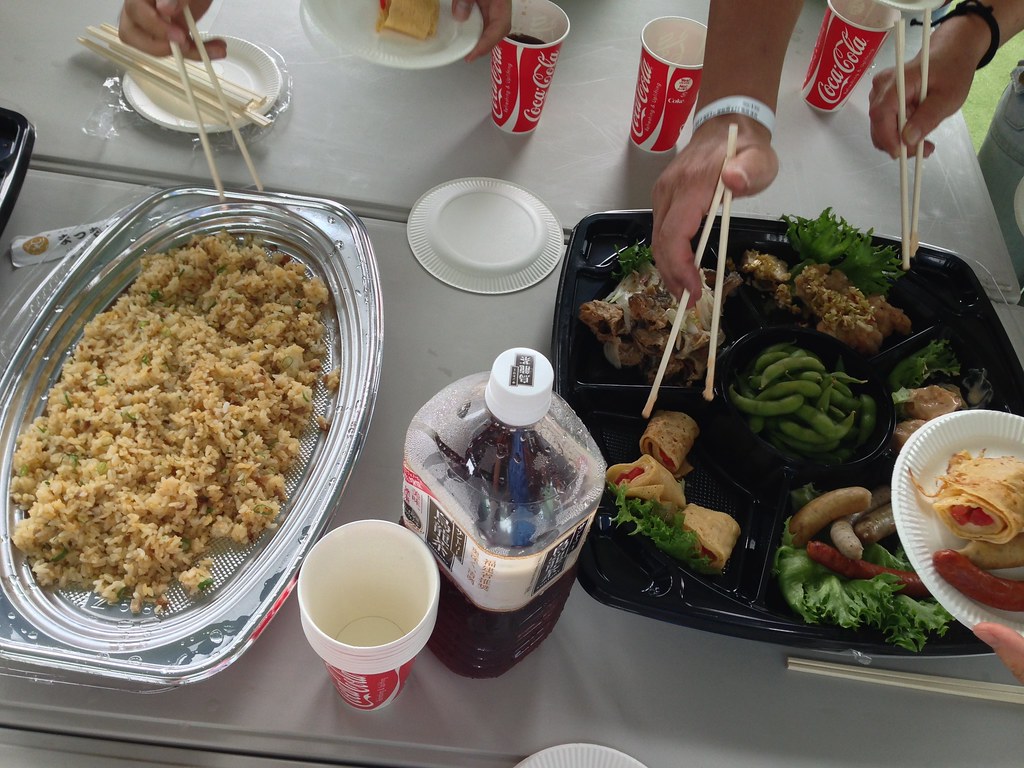 For the ladies, Nibun San also from the prefecture got her first win here, in 2h16 : congrats! 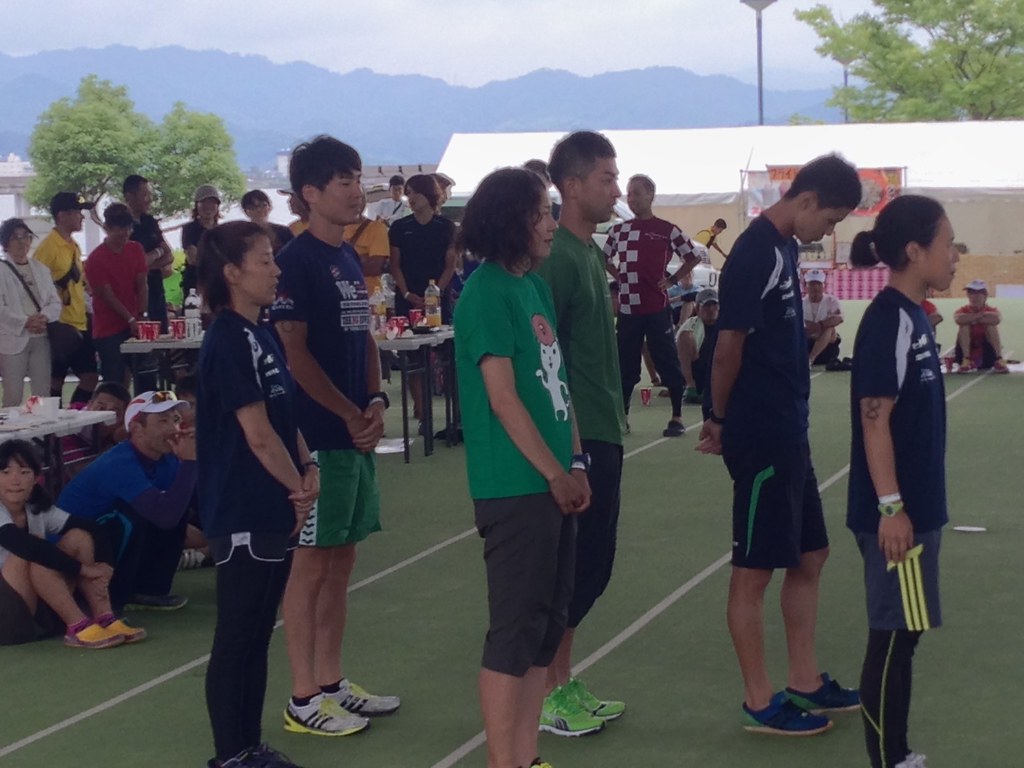 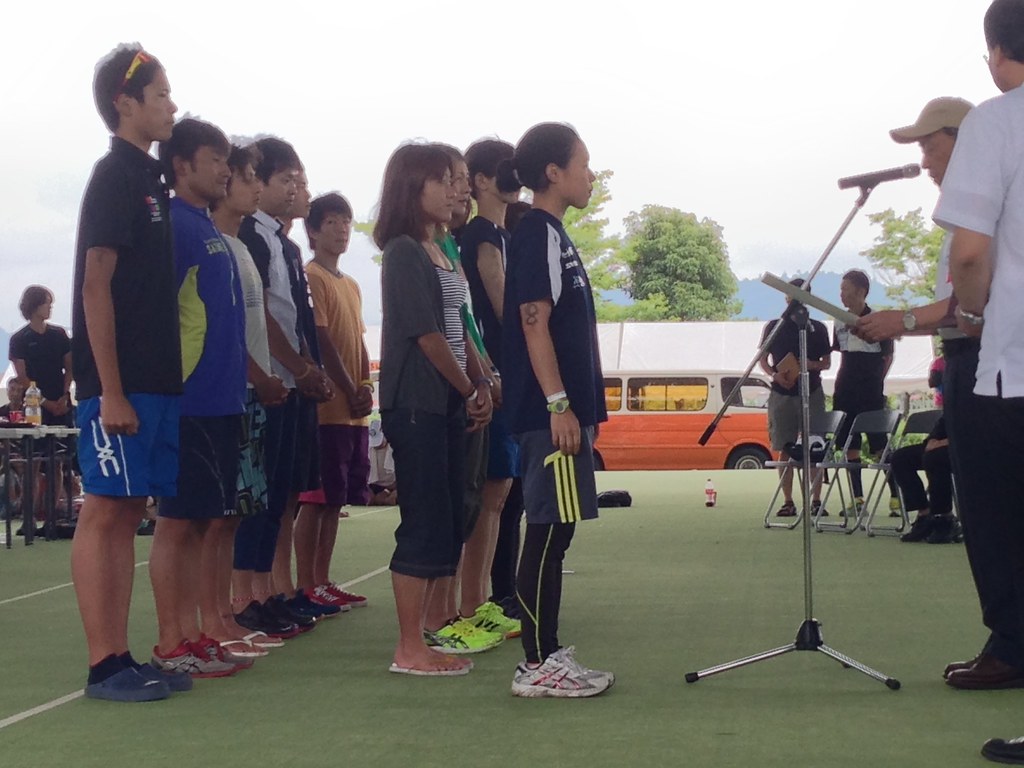 Top 6 athletes of the day

Male winner was from Kanagawa Prefecture, Takamura San with a time of 1:58:17. 20y.o, I think he is a student too.

There was also a junior race where the team coached by Sydney Olympian and local superstar triathlete Obara San (not only Olympian but he also did great at Hawaii Ironman too) had good results.

The future of of triathlon in Tottori is in good hands.

As each year TCC the local TV crew did a report of the event. Being one of the 3 athletes living 'on site' I was featured during the program.

I will upload the full version later but here is my finish and having a cramp just after : here we go for the not-cool shot :-)

All in all a good race, I finally had a proper run. But I don't want to just stop here, I think I can still shave some minutes. On the swim especially, 3 minutes less is doable (I did it before... a long time ago though), on the run maybe 1 or 2 on a good day. On the bike, maybe a couple also on a good day too and with a proper tri bike (another story...)

After this race I focused during 3 weeks on the run for a couple of run/ekiden races (next post). Now I am starting a new cycle of training.

My next triathlons planned for this year : an other Olympic Distance triathlon in Kurashiki (in September) with a very hilly bike course, that should be fun and the 70,3 in Taiwan (1.9k+90k+21.1k) in November, just before my 40th birthday! I am looking forward to this one, I've only participated once in such a distance and it was...10 years ago. That will be interesting to compare!