Shodoshima Half-Marathon Report - but not only

In November I had planned two half-marathons. Nakaumi marathon on the 1st of November which was supposed to be a ’rehearsal’ before the ’real’ thing in Shodoshima (because I had not run long race for 3 years). Unfortunately as I was sick at that time I did not start at Nakaumi... Shodoshima became then a ’all in’ race.

But before to go in the detail of the race itself, let’s do a bit of tourism!

Shodoshima is an island at the south east of Okayama city. We drove about 2h15 to reach the neighbor city of Kurashiki where we stayed on Saturday night.

(“Highway” (limited to 80kph) service area for a short break)

From the Sea of Japan to the Seto inland Sea : 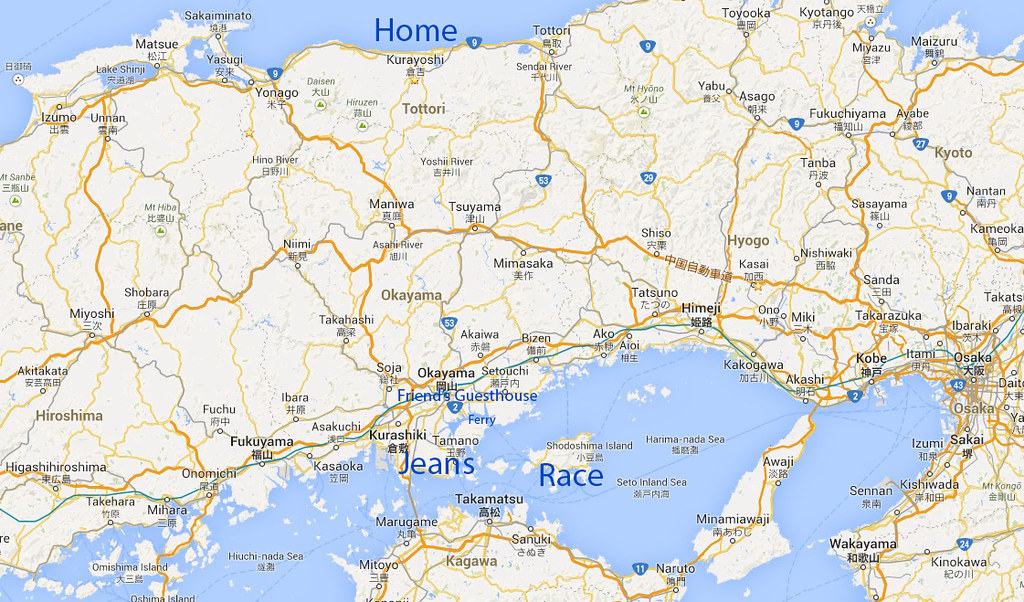 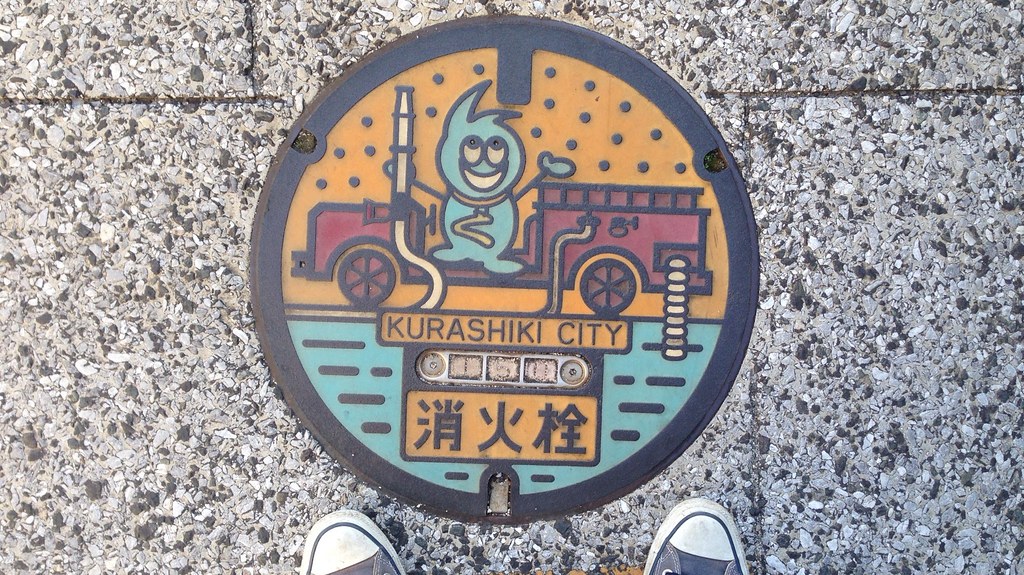 
During the day we visited the city of Kojima a little bit at the south of Kurashiki near the sea. 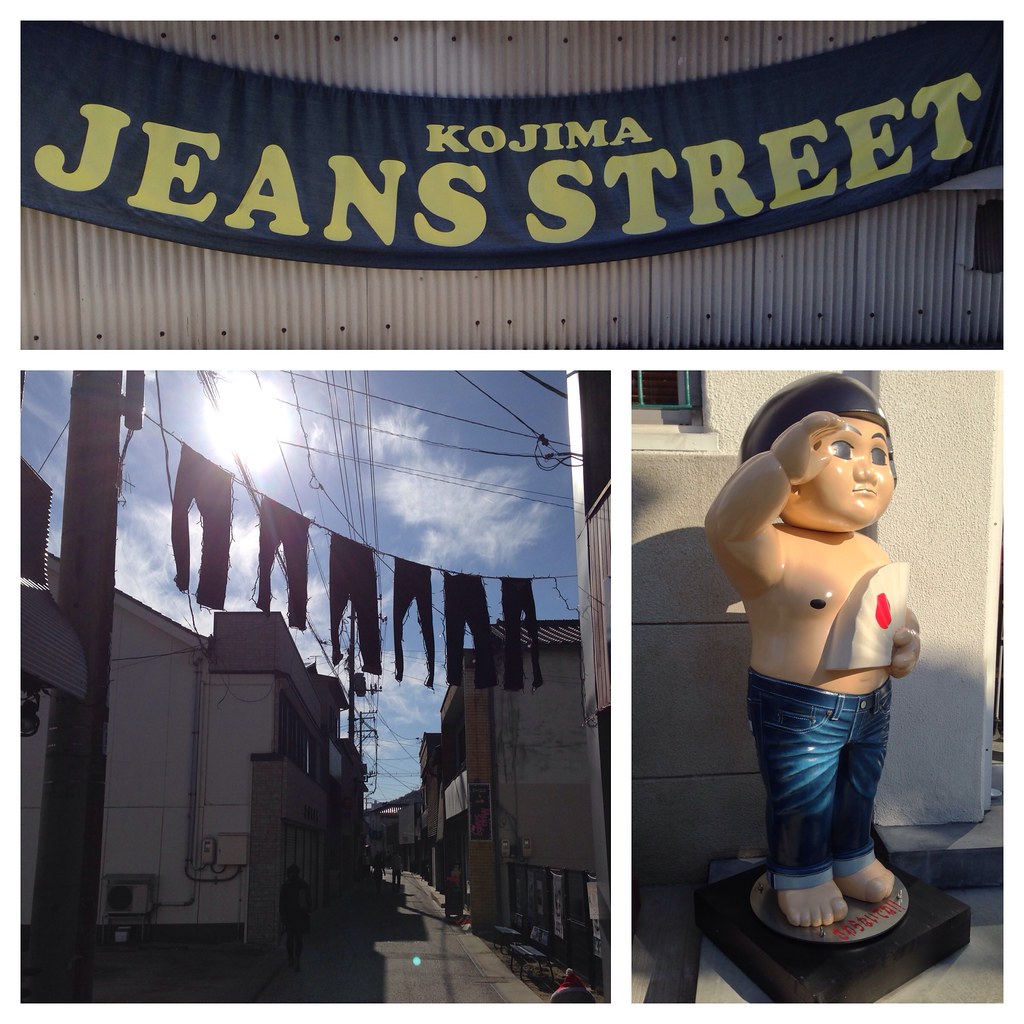 Kojima is famous for its Blue Jeans fabrics. Settled for decades in the area Jeans makers grew their reputation thanks to top quality products. There are now many brands in the area who have all the pride of denim 'Made in Japan'.
To showcase their work there is a Jeans Street (2 actually now) where some of the manufacturers have their own shop.
A must visit for Jeans lover. (Bring some money also...) 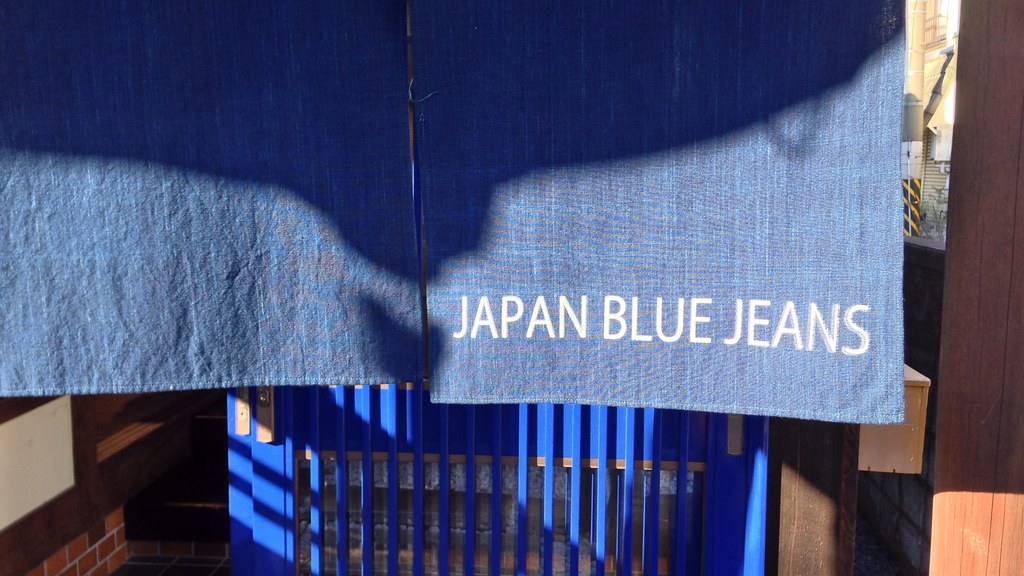 As I was in due for a new pair I visited the shops to find my fit. 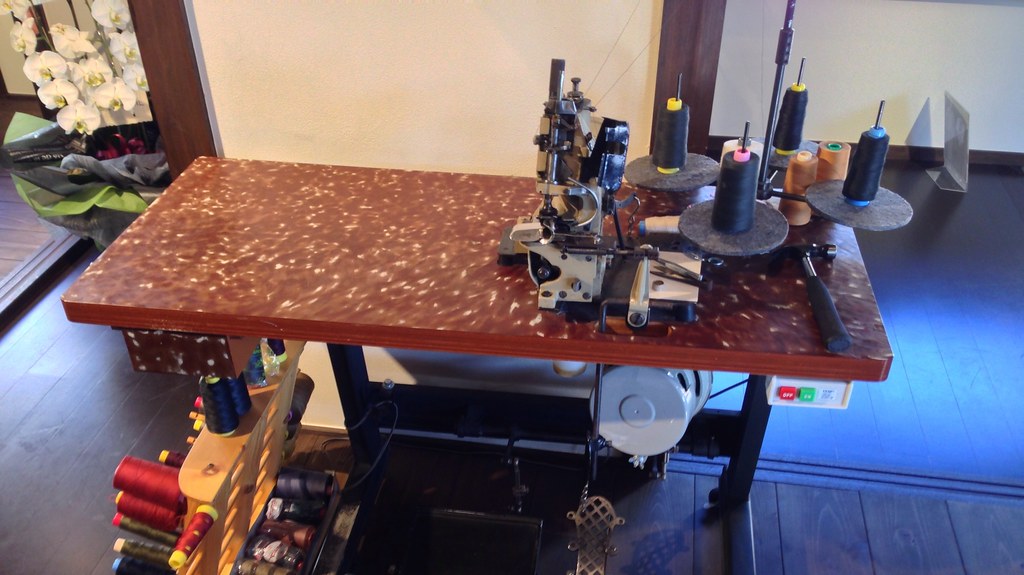 Turned out that being tall (in Japan...) it reduced my choice a lot. Add to this that I like to wear my Jeans large at the bottom, definitely not the current fashion. 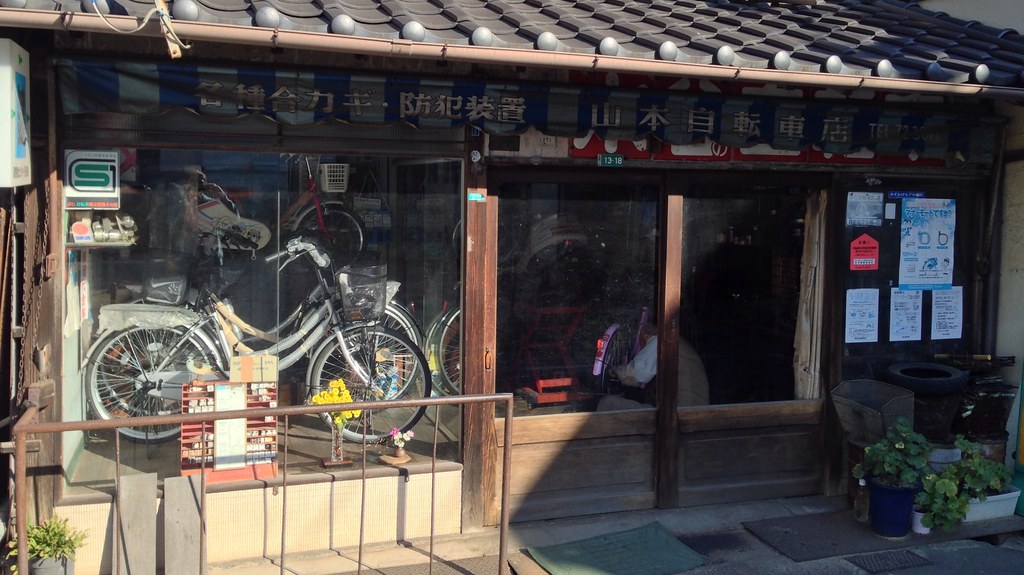 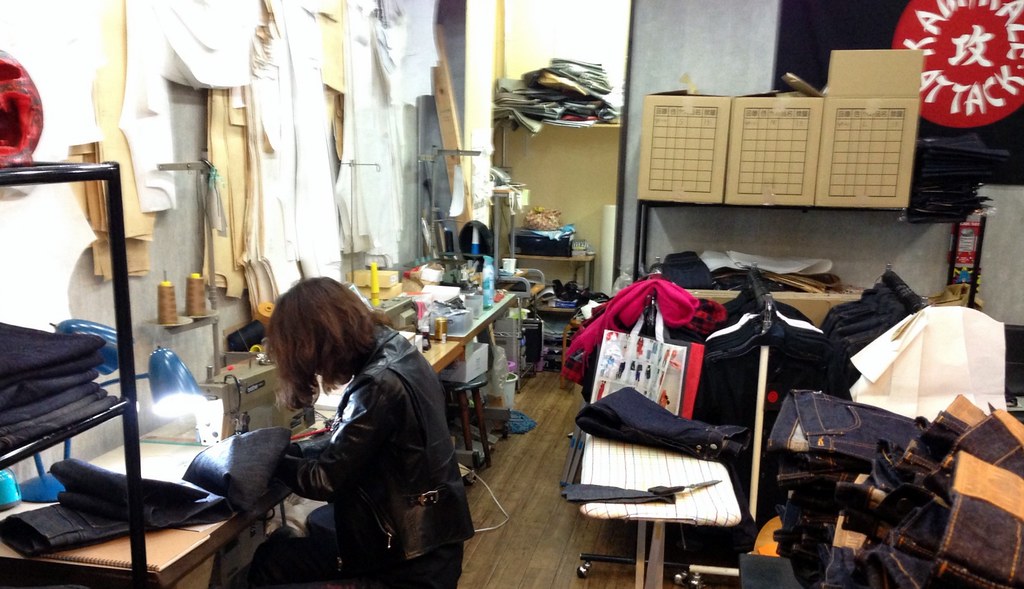 But after research I found the One! :-) I was lucky as, first, they still had one in my length (but I don’t have to get bigger now) and secondly they stopped to produce this model as no one buys it. 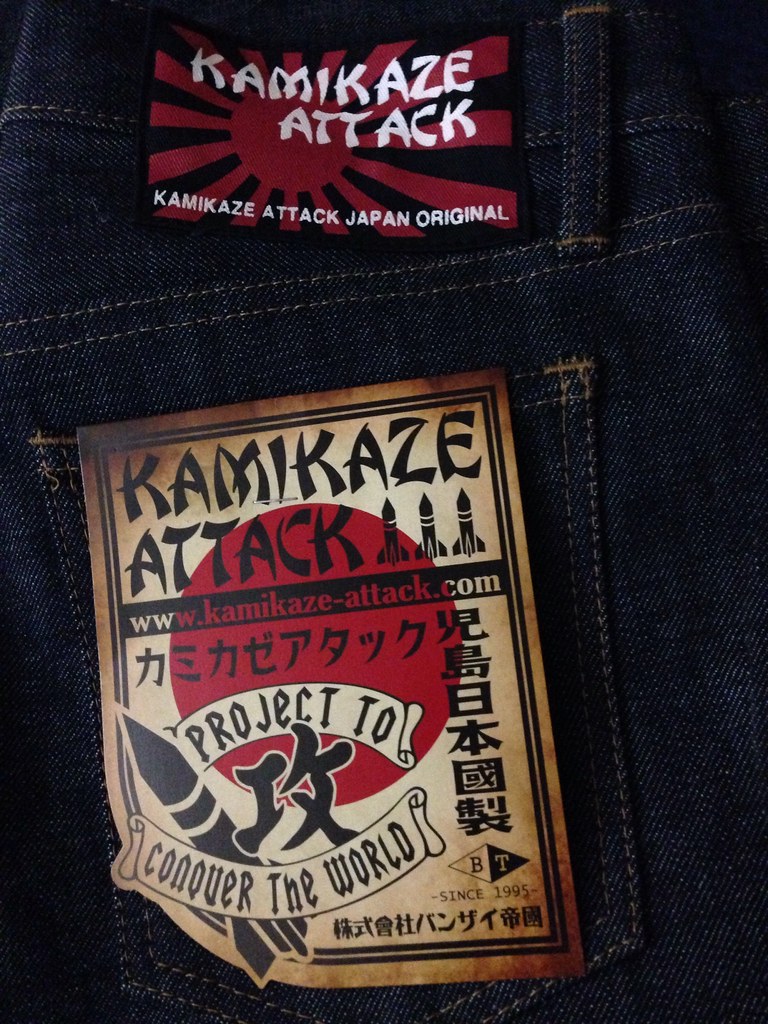 [The brand name though was a little bit surprising : ’Kamikaze attack’... for sure not the most politically correct name ever for a brand. I wonder what's the story behind the choice...]


On the next morning as early as 6am we took the road towards Shin Okayama Kō (Port of New Okayama) where we let the car for the day for just 500 yen (special price for the half-marathon / 10k race participants). 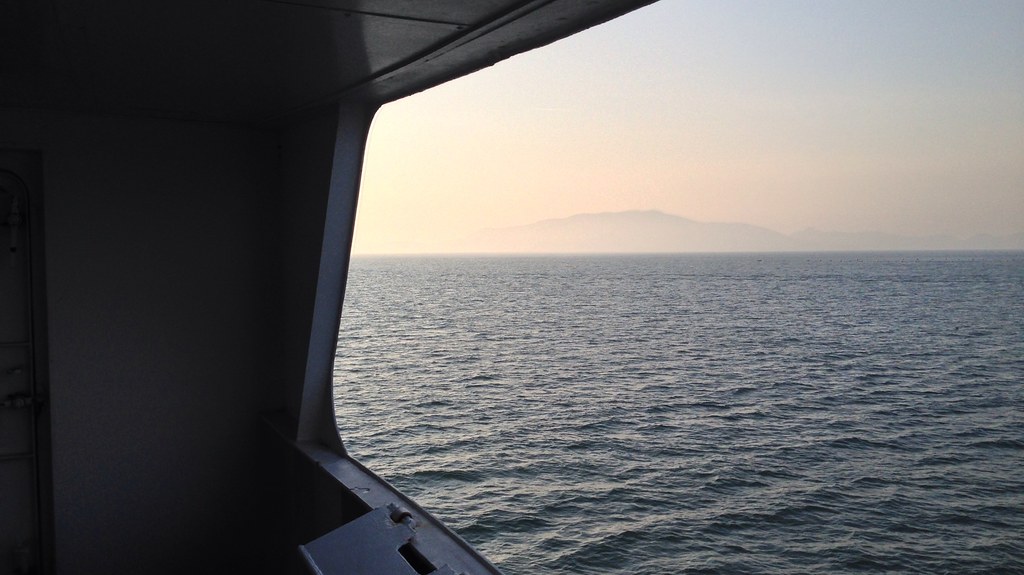 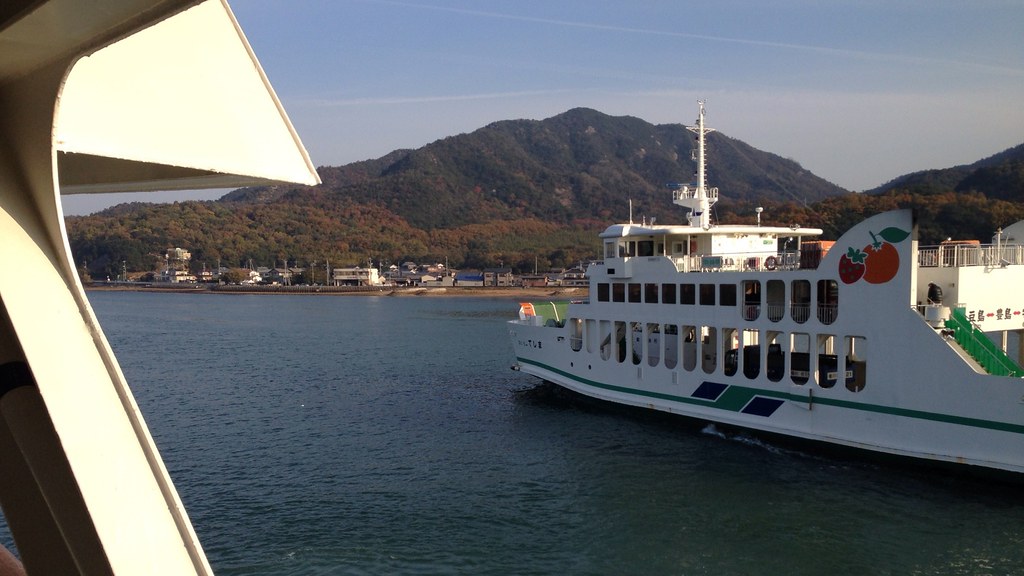 We arrived 1h10 minutes later at the port Of Tonosho on Shodo Island. From there a shuttle bus drove us for free to the race start. We got there quickly about one hour before the start, just enough to prepare and warm-up. 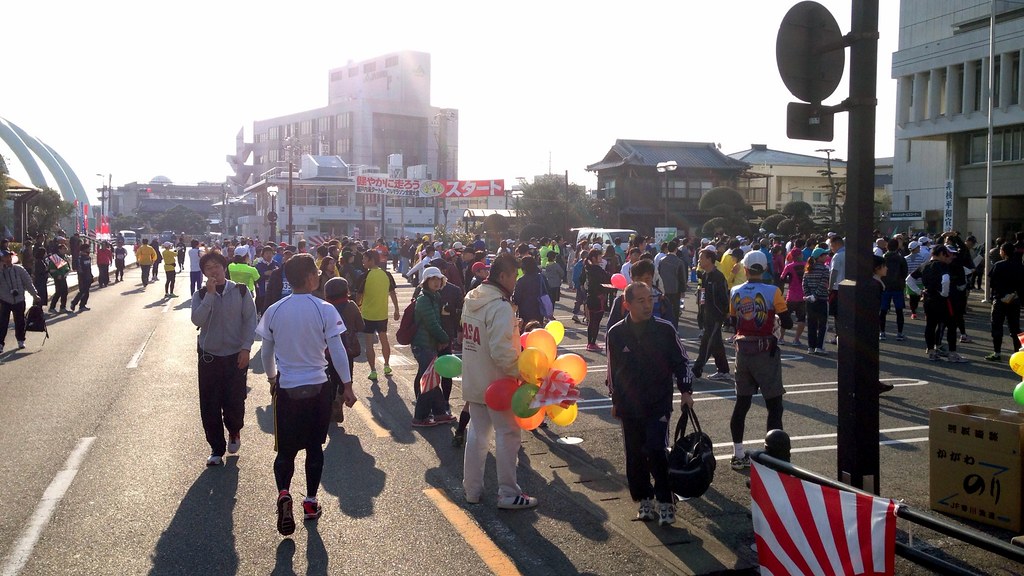 
It turns out that this week-end was also the 20th anniversary party of my triathlon club in Le Havre. We had scheduled to have a video call but it did not work out so I recorded this message, in French - obviously :-)

I started triathlon in 1998 at the age of 25y.o (yes I am old, I turned 39 last week myself). The coaches, and experienced athletes of the club taught me what they knew but mainly made me love the sport. It changed my life quite in a radical way, I am not emphasizing. First as a lifestyle, in a matter of weeks I transformed from an occasional road bike rider (on my dad’s 80’s steel Peugeot bike on which I also did my first triathlons) and jogger to a 2/3 times a week swimmer and same for the run.
Needless to say my body changed but also my mind. I gain a lot in self-esteem and confidence. Also building the club homepage at the time was my first lines of code on the web which became later my job!

So yeah I owe to this club! Despite living far for a while now I have been keeping contact with them thanks to Facebook (you can say whatever you want from FB but well, it works).

And as you can see I still use my sport wear from the early 0's time! Well for the singlet, Sunday was a special day so I dug it out from my closet ;-)

Ok ok this post is diverging in many ways, let’s go back to the race! 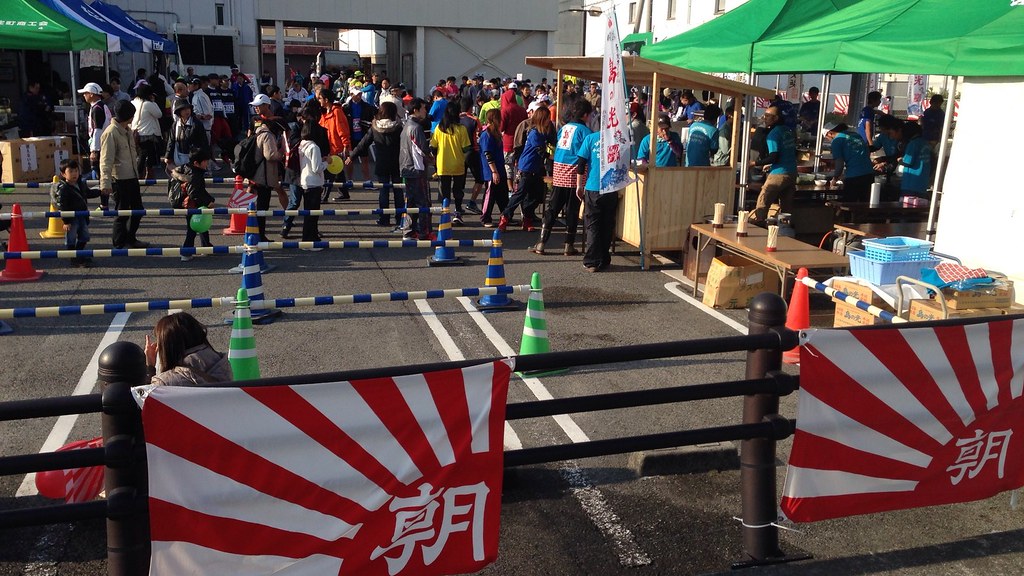 
I positioned in between the 1h30' and 1h45' target groups before the starting line. As I said in the previous post my goal was 1h30' for a good day.

I started runkeeper but it had only 30% of battery charged (beginner mistake).

Weather was great, no wind and about 13 degrees Celcius. So not warm but very good for a running race. Much more my element than the horrible heat of summer that we experience here and kills me.

I started what I felt as a conservative pace but noticed I was running between 4’ and 4’10" without pushing at all. Good!

Then after few kilometers the profile of the race appeared to me : a succession of ups and downs (and not small ones). I had not studied in depth the race before and as it was a coastal road I presumed naively it was flat... Not at all. Even the terrible 10k of July, the Suika marathon was easier for the elevation. (But temperature/humidity was unbearable at the time.)

Still even with the climbs I was feeling alright and reached the 10k in less then 42’. A minute less than what I had planned for a flat course! So despite the profile I started to think I could still reach my goal.

Half of the race and I was still ok. I drank a bit of water at each 3/4k spaced aid station and started to sip an energy gel from the 6k mark. But the perspective to run again all these slopes in the other way was not particularly engaging.

Adding to that, my iphone turned off at the 13k mark and so no more pace information. It started to be tough for the legs and left foot and hip. I need soles to correct my balance.

The 15k mark was identified and I guessed I was still in time.

Running the slopes got harder and harder but I still had energy and was not losing so much comparing to close runners. 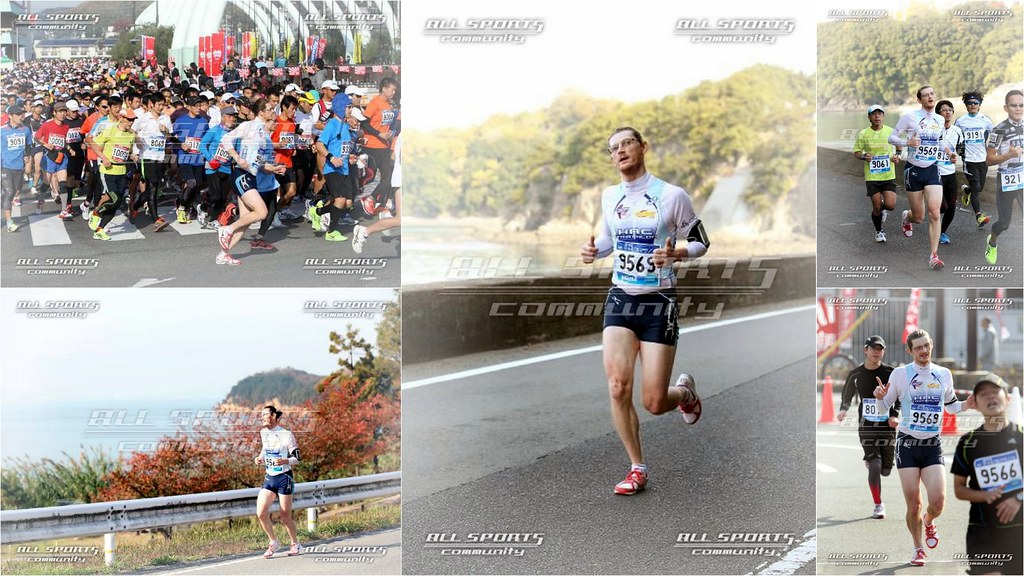 But the last climb was terrible and almost thought of walking. Then going down I saw the 20k mark which was a relief, I knew I could keep the pace and even push a bit to the end. Around me other runners were suddenly clearly accelerating and I thought it was to cut the 90 minutes. I tried to do so as well. but something a bit weird happened 400m before the goal : we were suddenly stopped to let go an ambulance going for an athlete in trouble, I guess :-/. We stopped only about 10 seconds but it was hard to restart the 'sprint’.

I finally cut the line and asked around me the time : 1h30 and few seconds!

I got confirmation of my time few minutes later receiving my printed ’diploma’ (top-notch organization) and a gift (one more weird towel in my collection).

I am very pleased with the result as despite the hills I managed to reach my goal. Also it’s nice to finish my year with an other good run (adding to the ekiden) with all the trouble I had on the run part of my 2 triathlons. 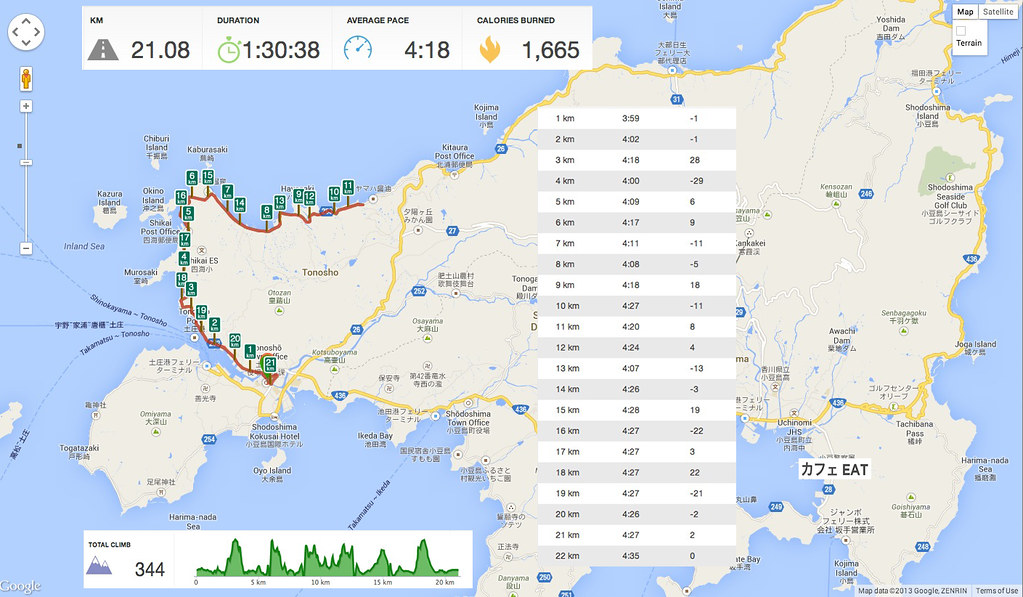 After the race we took a bus to have a lunch at a place called Cafe EAT I found on foursquare and was not disappointed at all. It was very nice. Then we just had the time to visit an Olive trees field (local specialty) and buy some Omiyage (souvenirs), a must do in Japan. 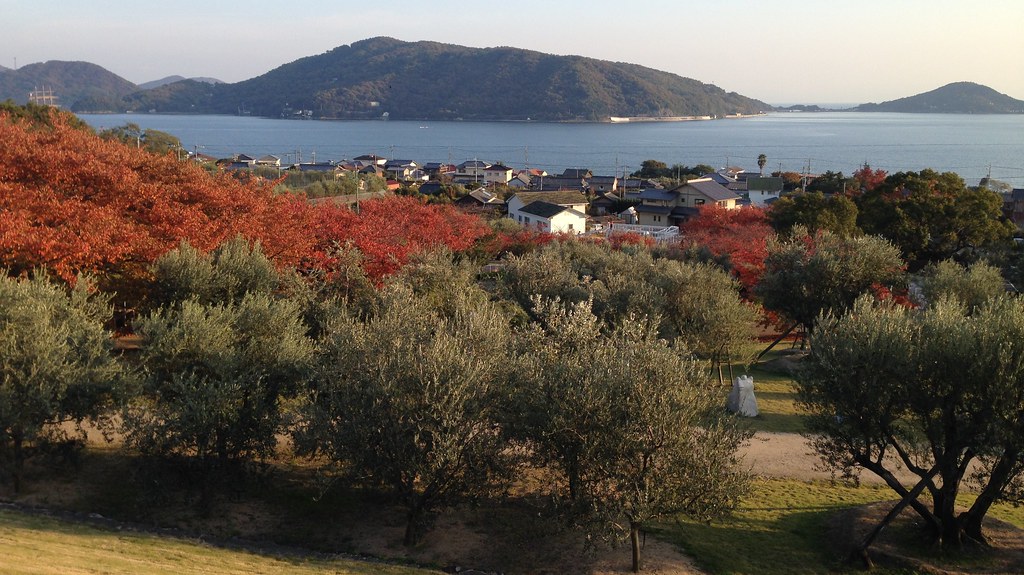 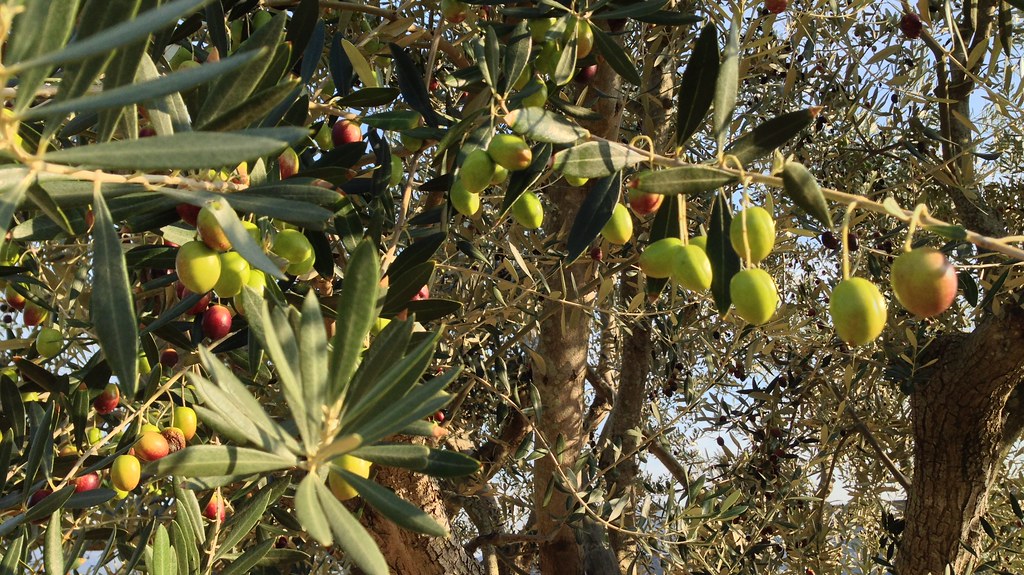 No race scheduled this December. Back to some core training and more swims. Also snow will be here soon and it means riding on home trainer. Run is going to be difficult, I have access to a cheap treadmill at the local sport center but I don’t like that. I will try to go to cross country ski this year. I know it’s possible in Daisen but have no idea about rental and prices yet...(I think I say that every year).

Next challlenge : maybe there will something in between before but one I already registered for is the Tottori Full-marathon in March (already sold out). Last year I registered but did not start because of an injure, time for a revanche! 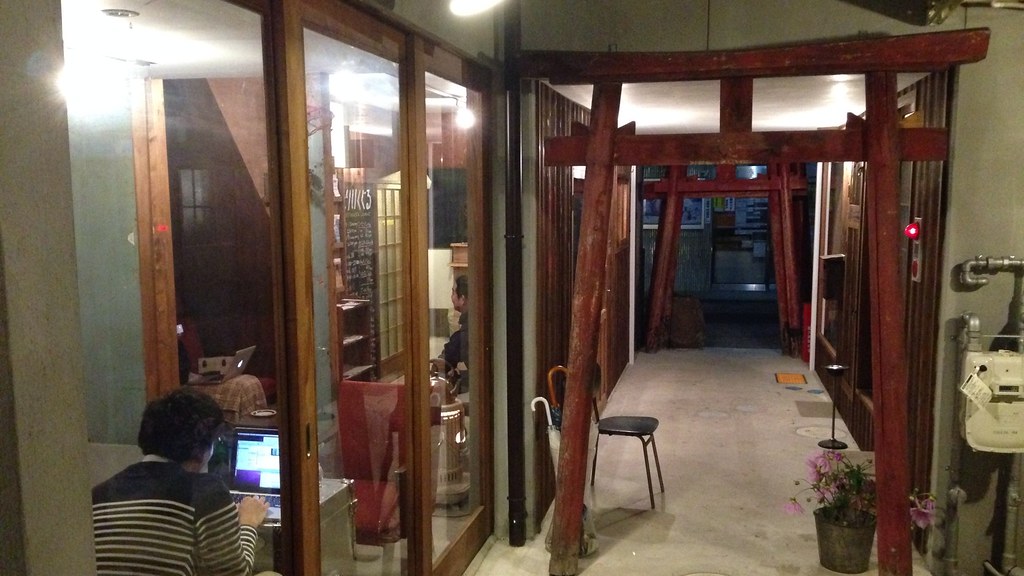