Last week-end was the main ekiden taking place in the prefecture of Tottori.

This ekiden is called Beicho(米鳥) a word made of the 1st Kanji of Yonago (米子) and the first Kanji of Tottori (鳥取). This running race in relay starts from Yonago to finish in Tottori city 116km farer. The race is divided in Ku (区) each one being run by an individual. There are 15 Ku and so teams are composed of 15 runners. Day one is from 1st Ku to 8th Ku, second day from 9th to 15th Ku. 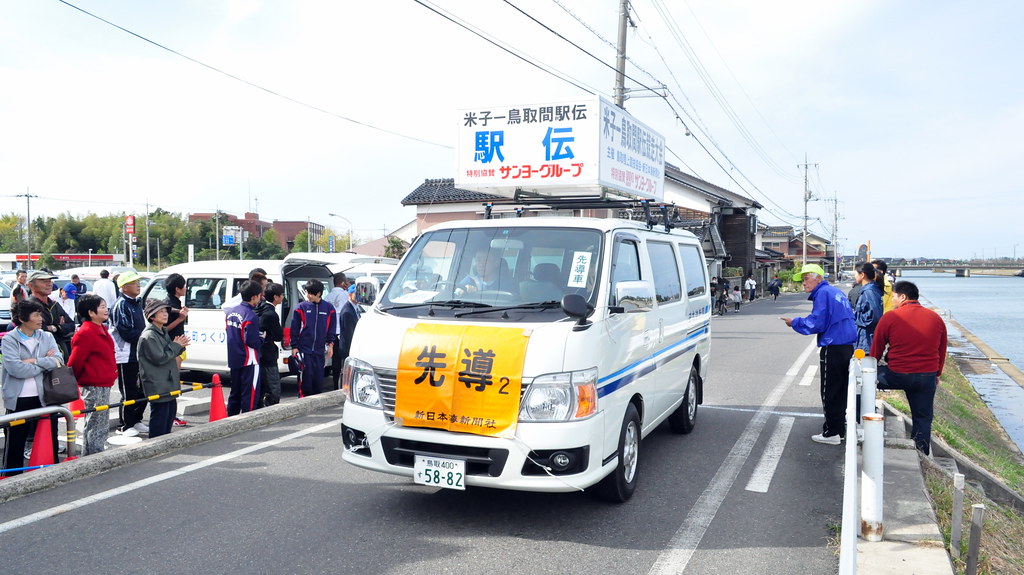 This year 53 teams took the start.There are different categories of teams (School, City, General, Company etc...) but of course there is also an overall classification.

I am living in Hokuei Cho and so am part of the Hokuei Cho team This is my second participation. It seems we have a good reservoir of runners and so Hokuei is one of the 2 towns to have 2 teams. I am part of the B team. 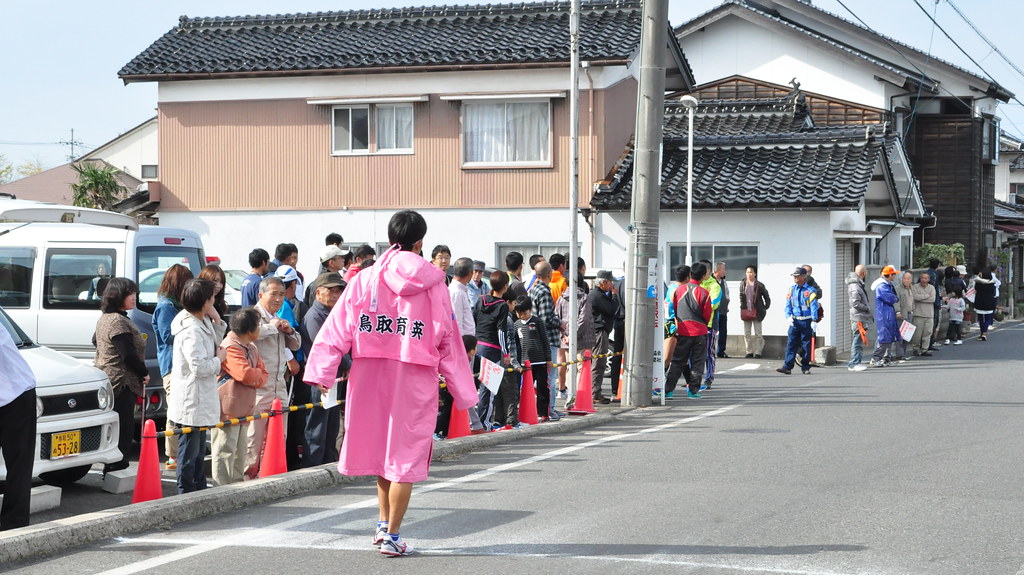 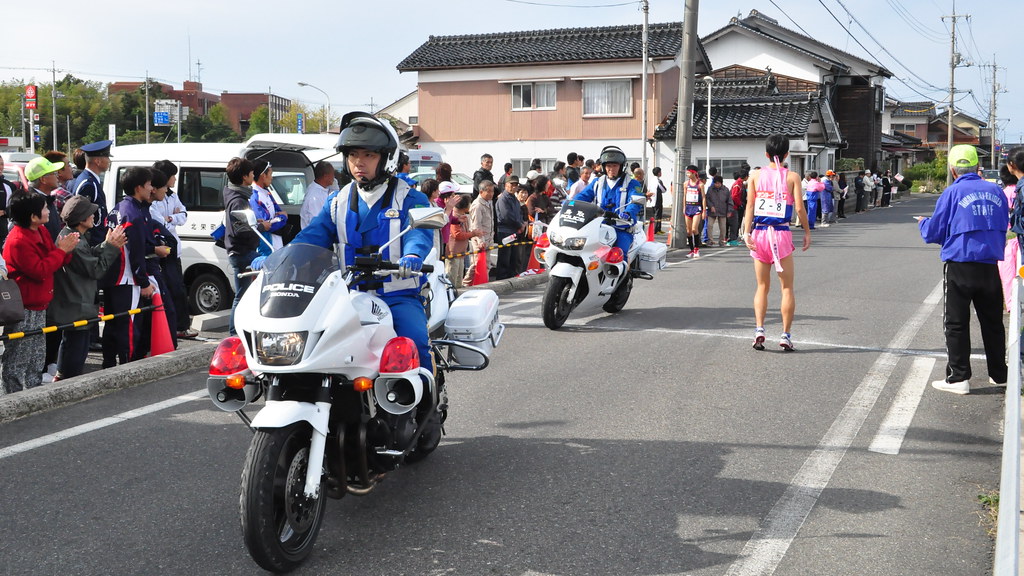 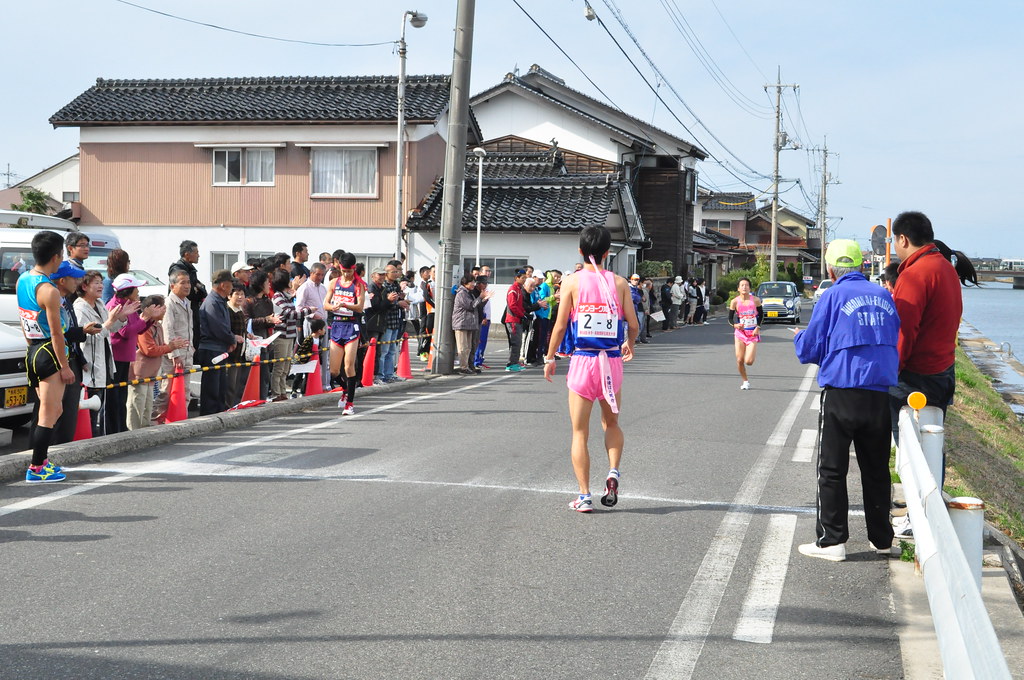 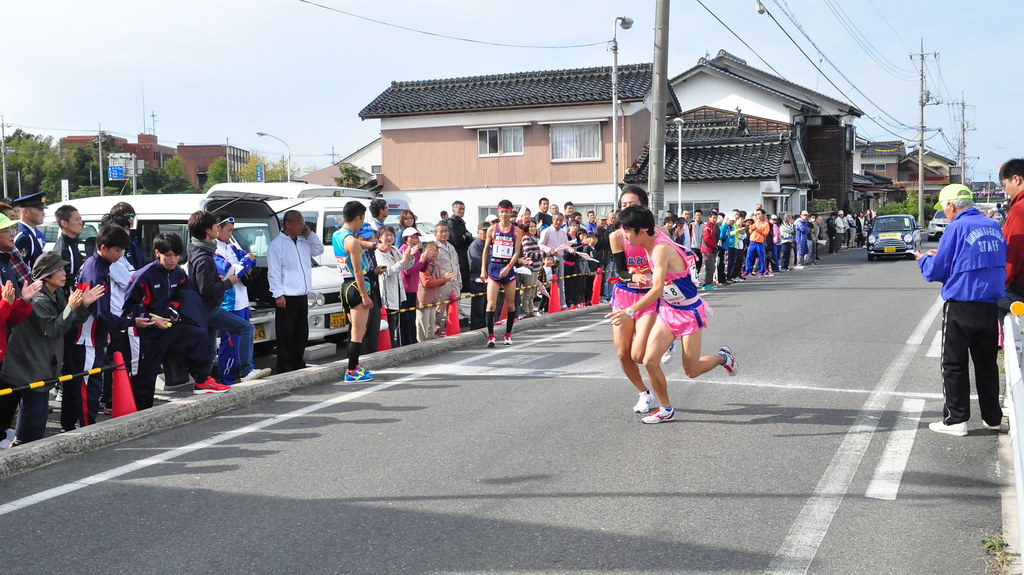 Being the main ekiden of the year in Tottori I think the best runners of the prefecture are all (or almost) participating (15 teams x 53 Ku = 795 runners). That makes a pretty high level as you will see. 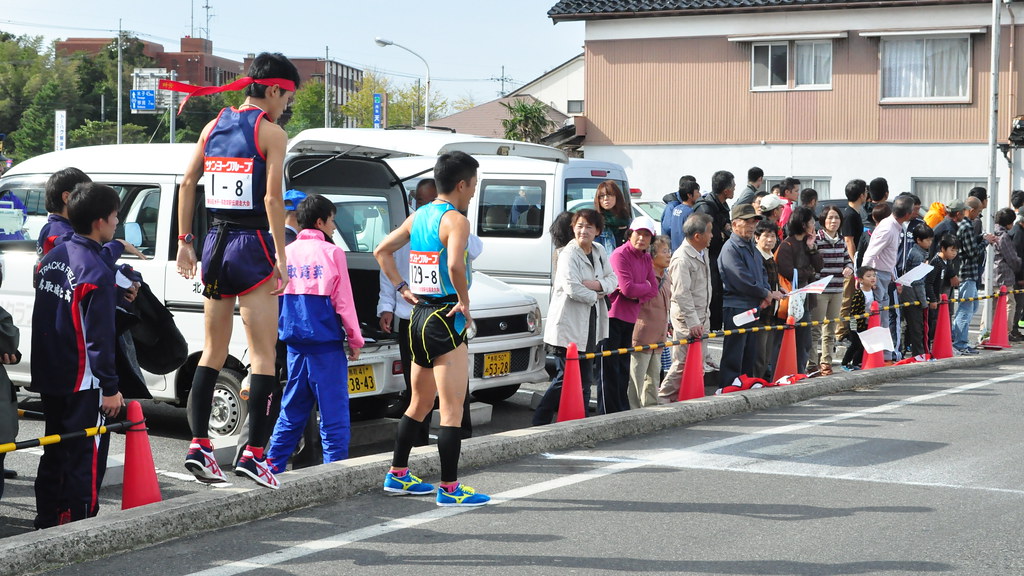 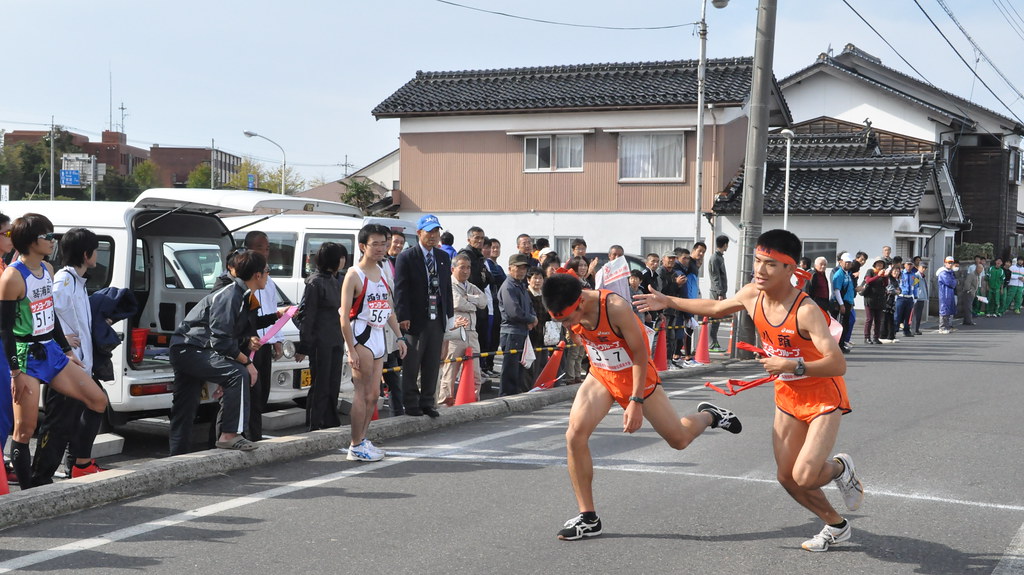 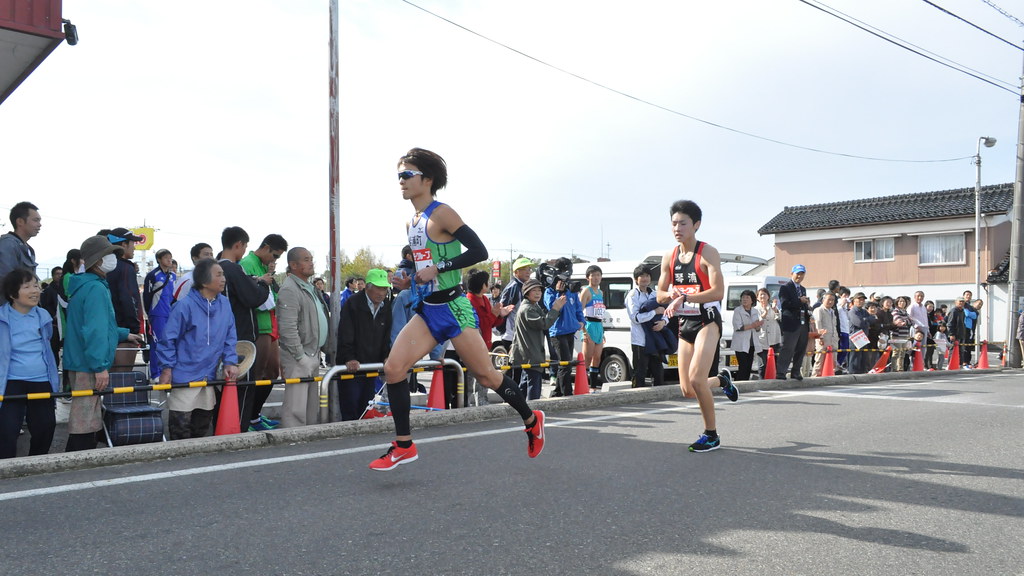 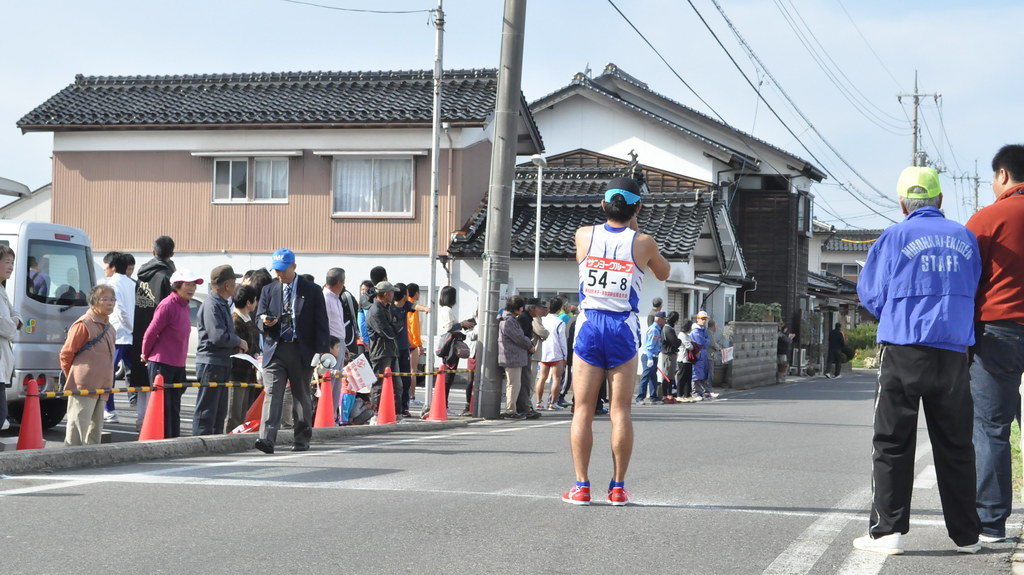 (Hokuei Cho A team, they did a very good job) 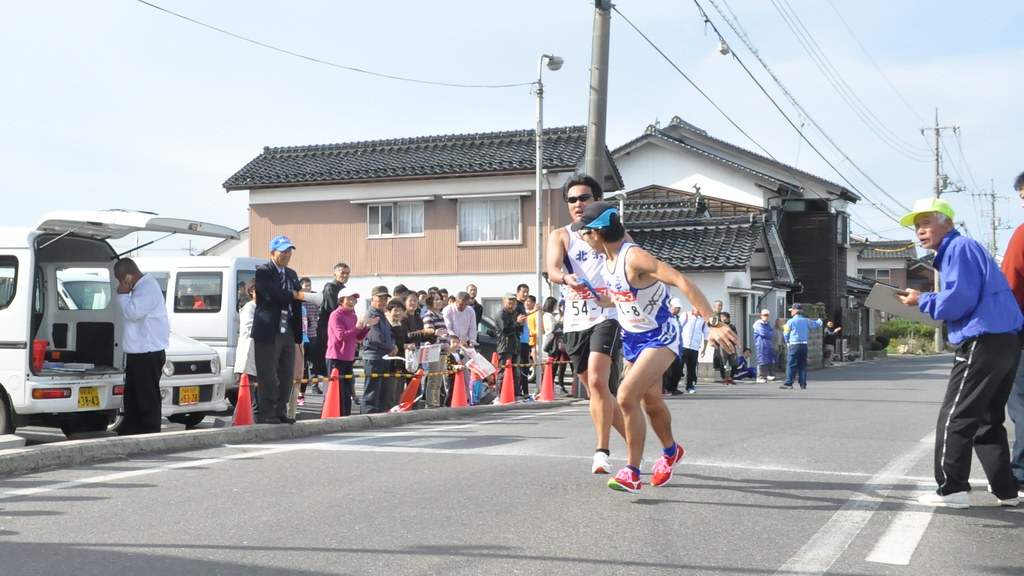 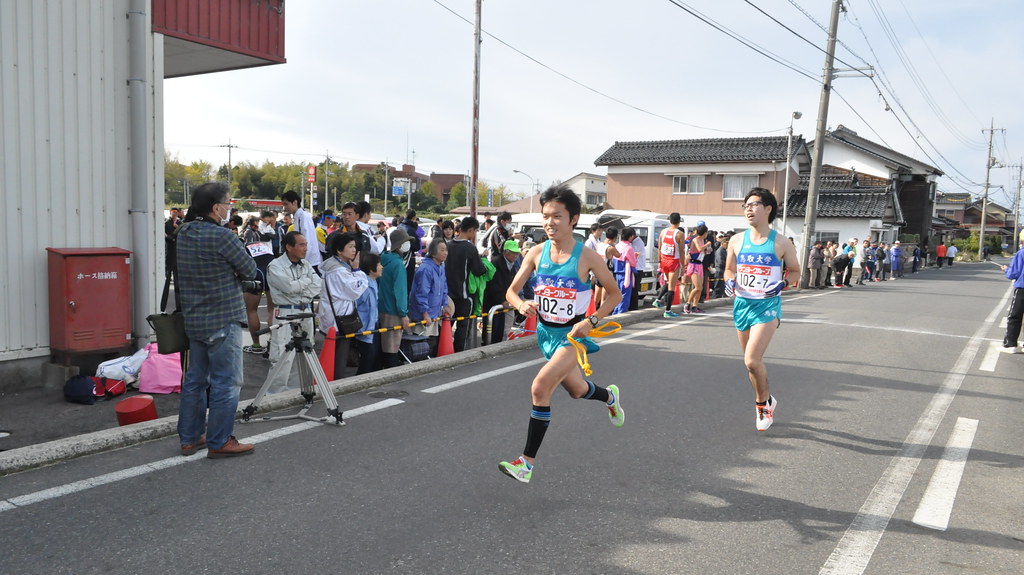 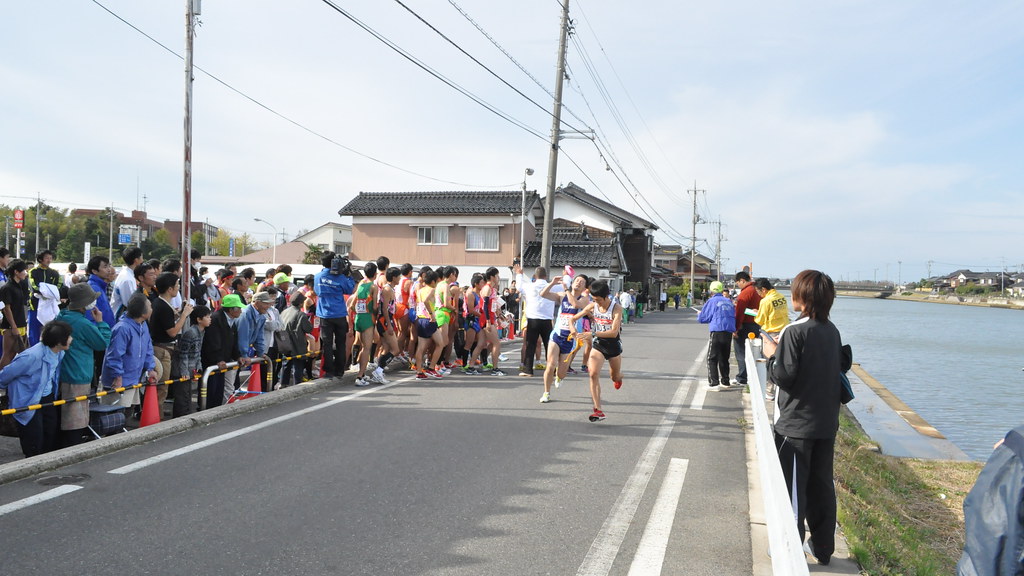 (A team just passed their relay before the “Kuriage” start (group start for the teams that are out of the delay imposed by the organizers.) 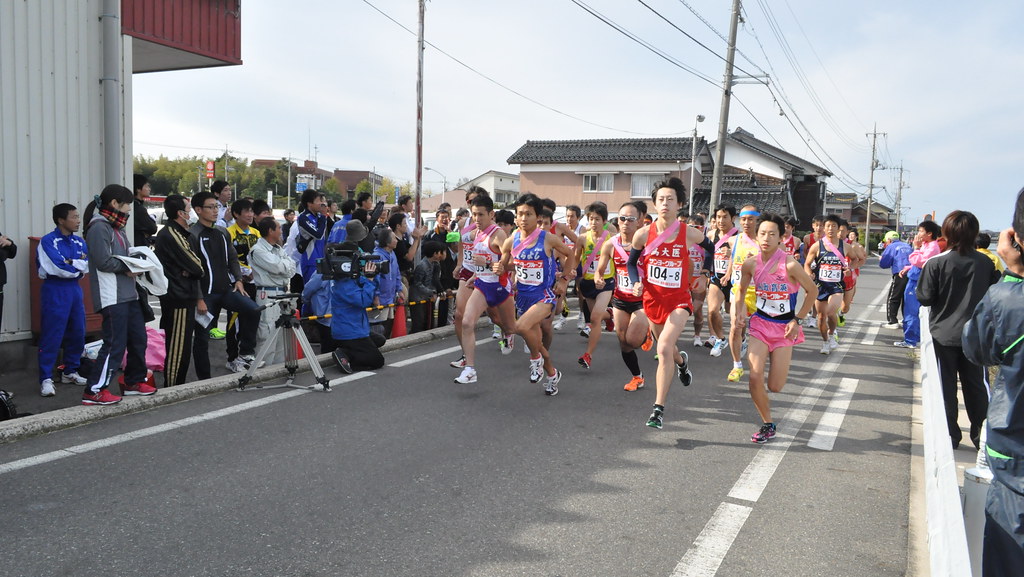 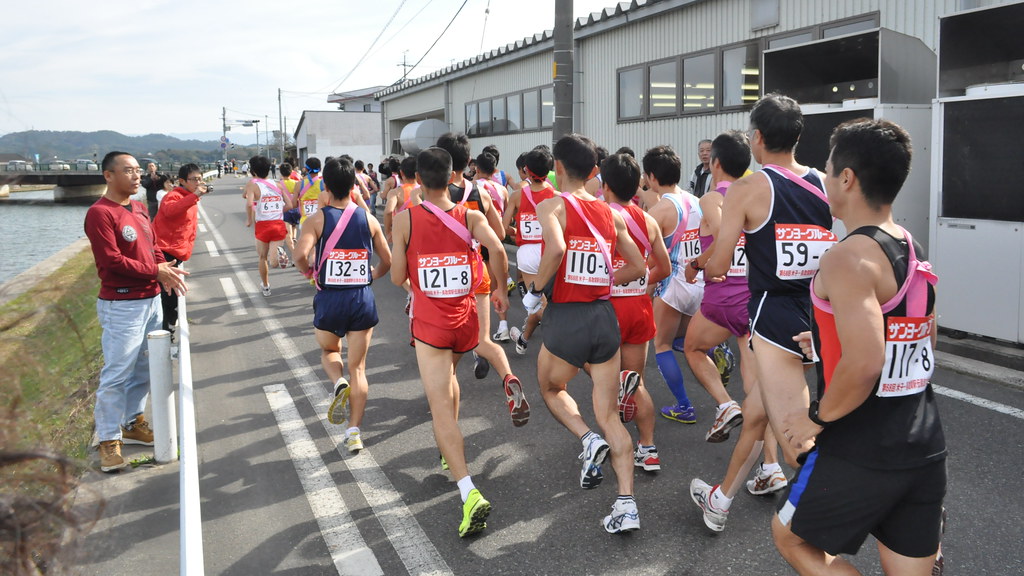 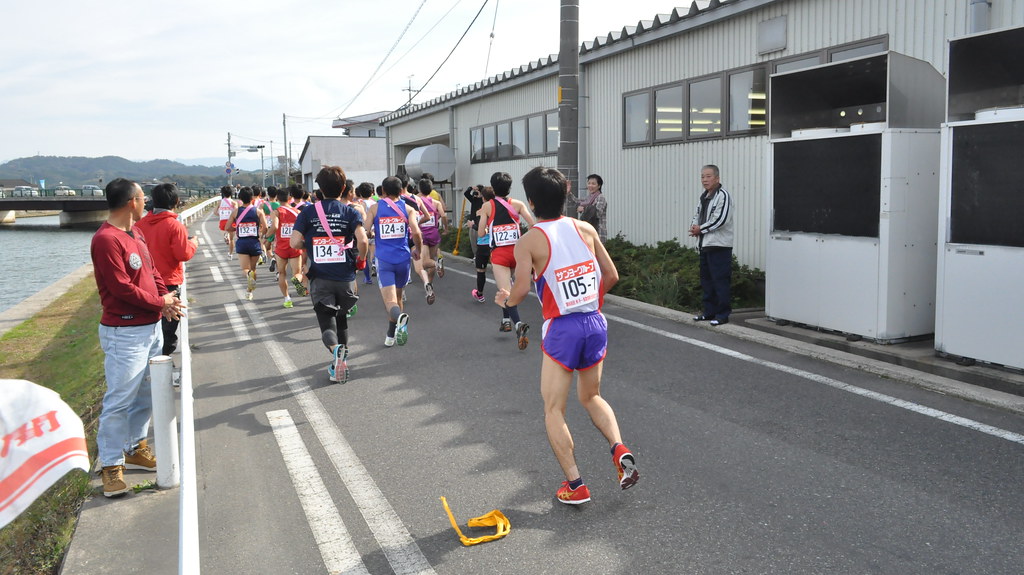 (the number 105 is just few seconds too late to pass the relay to his teammate who just started. That does not change anything for the time but runners really want to pass themselves the relay and he was kind of pissed off to miss by so little) 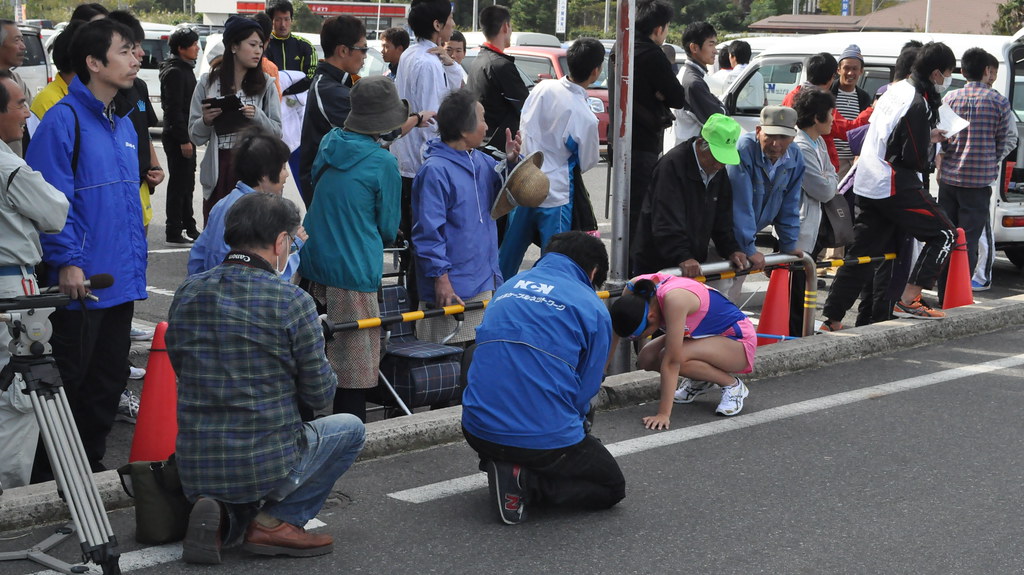 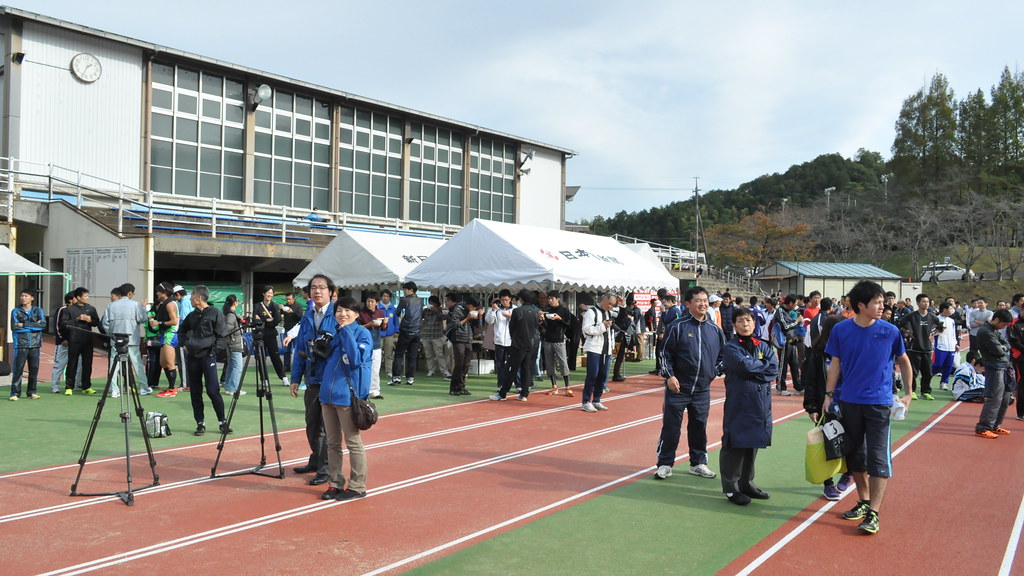 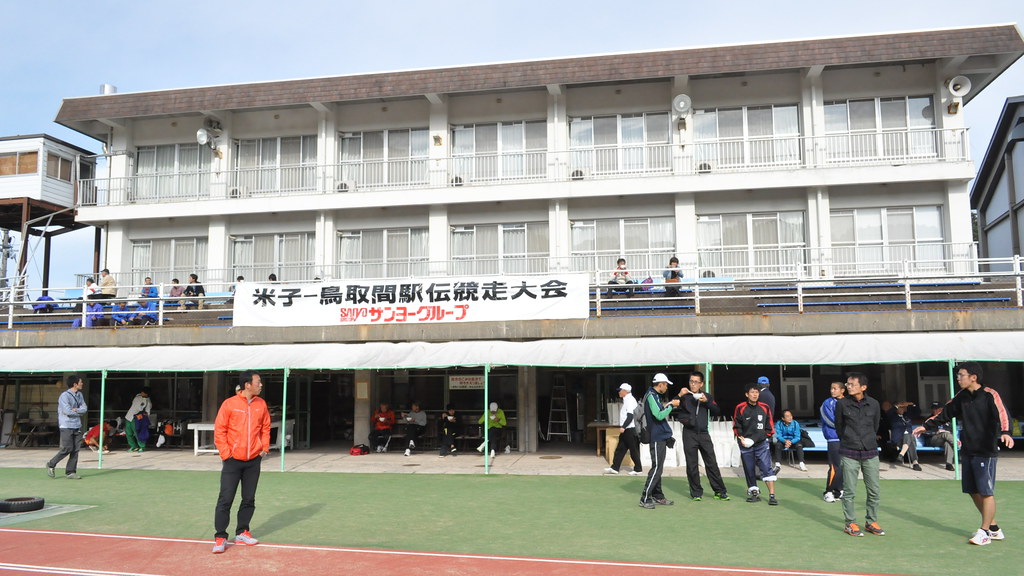 (This is Kurayoshi's track and field) 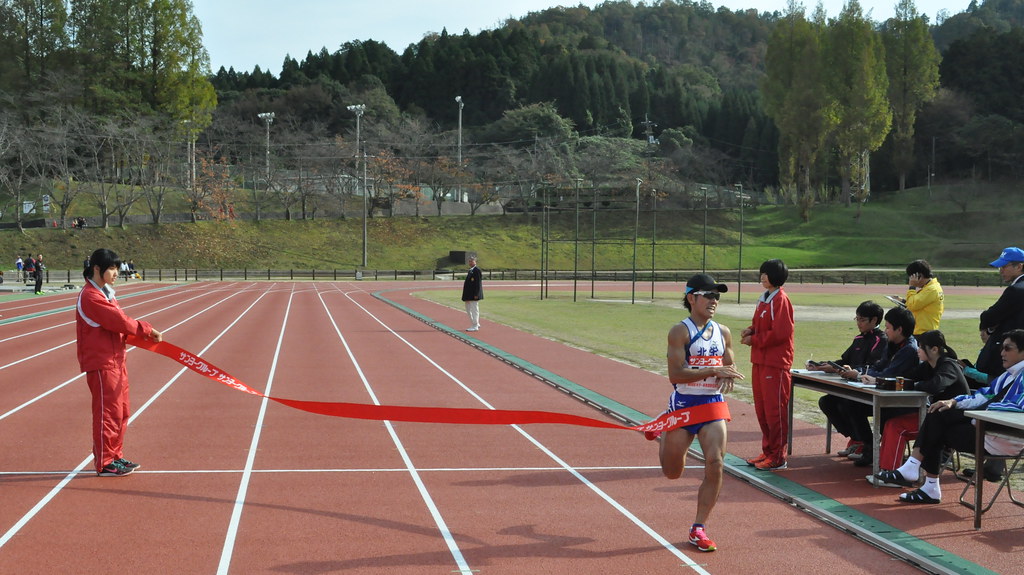 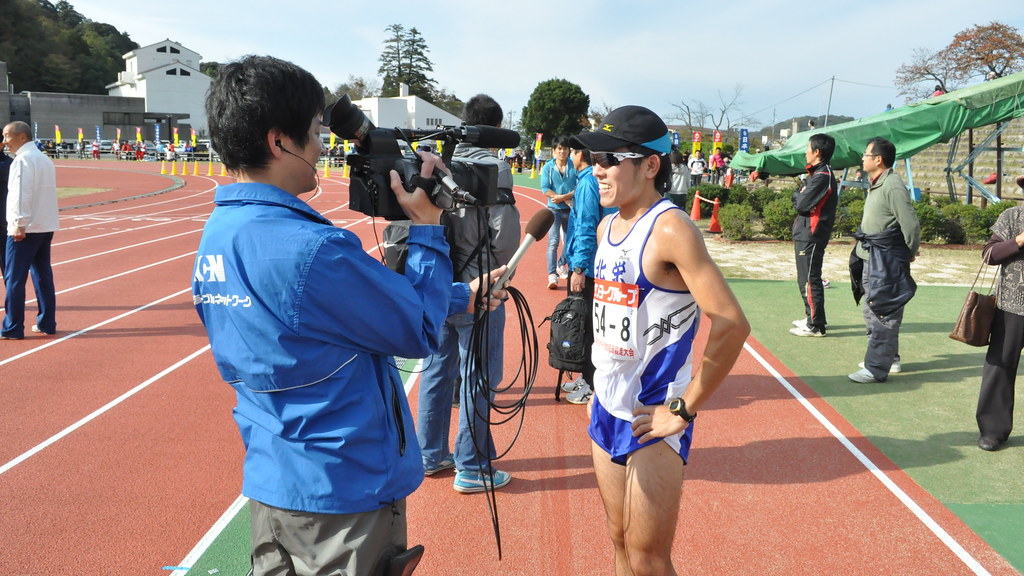 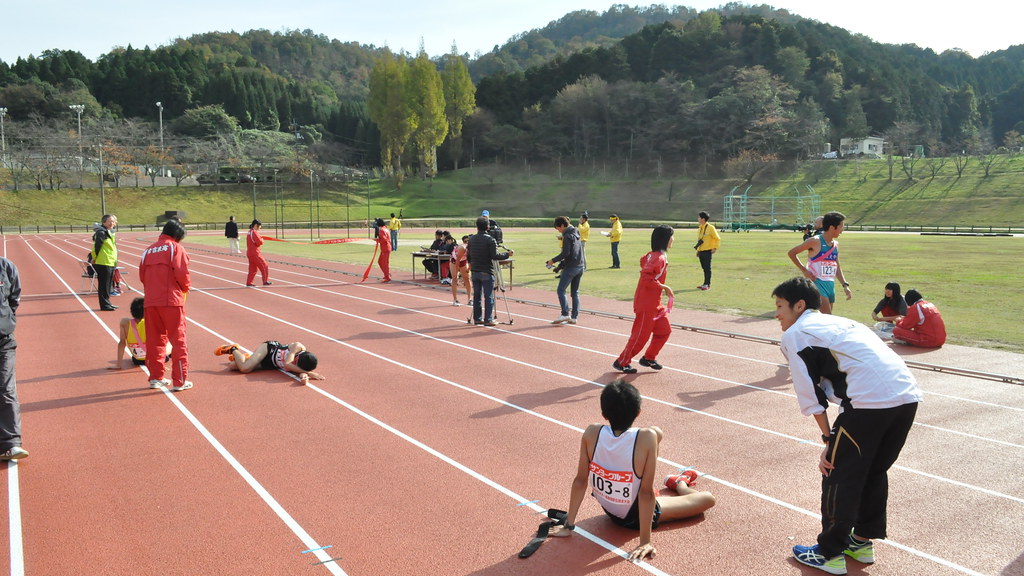 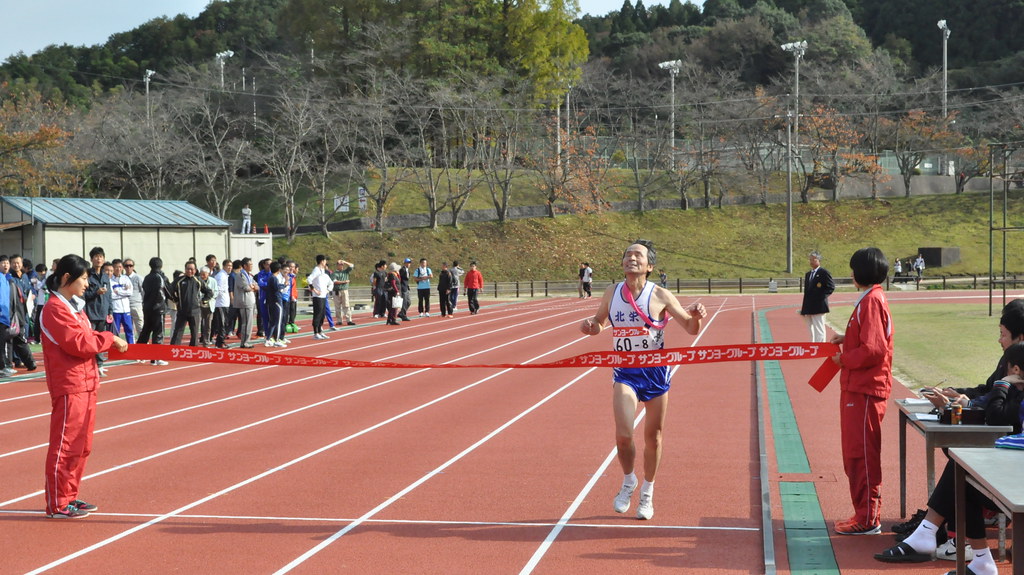 (My teammate from B team arriving) 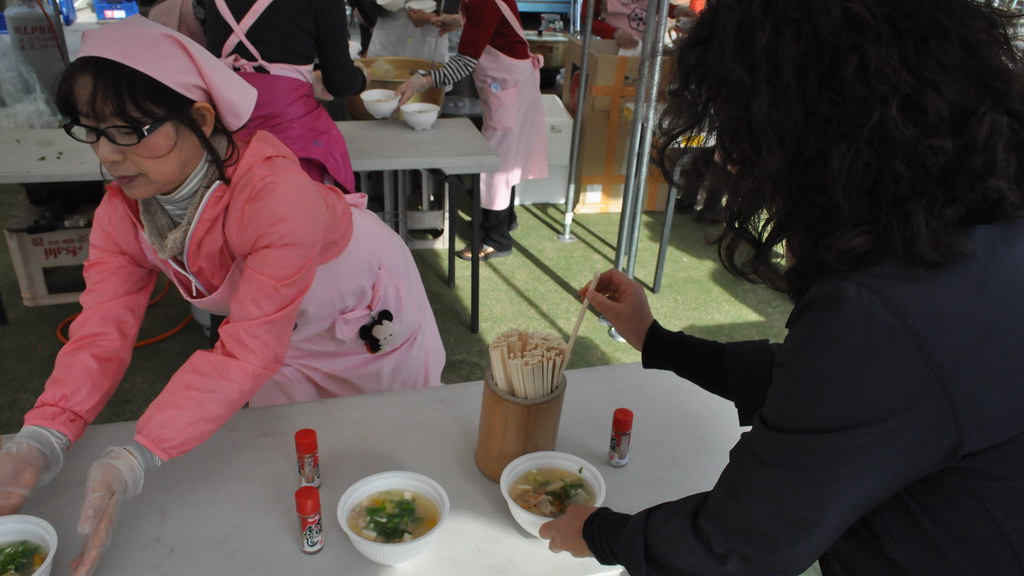 (As often, soup is served fro free at the goal, even for non runners) 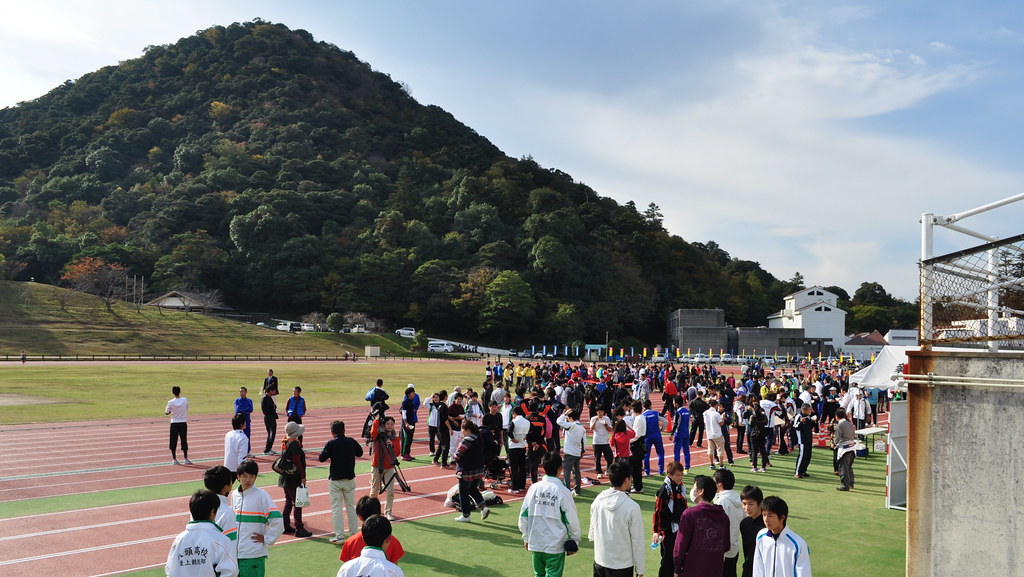 (Day one had a great weather, that won’t be the same the next day) 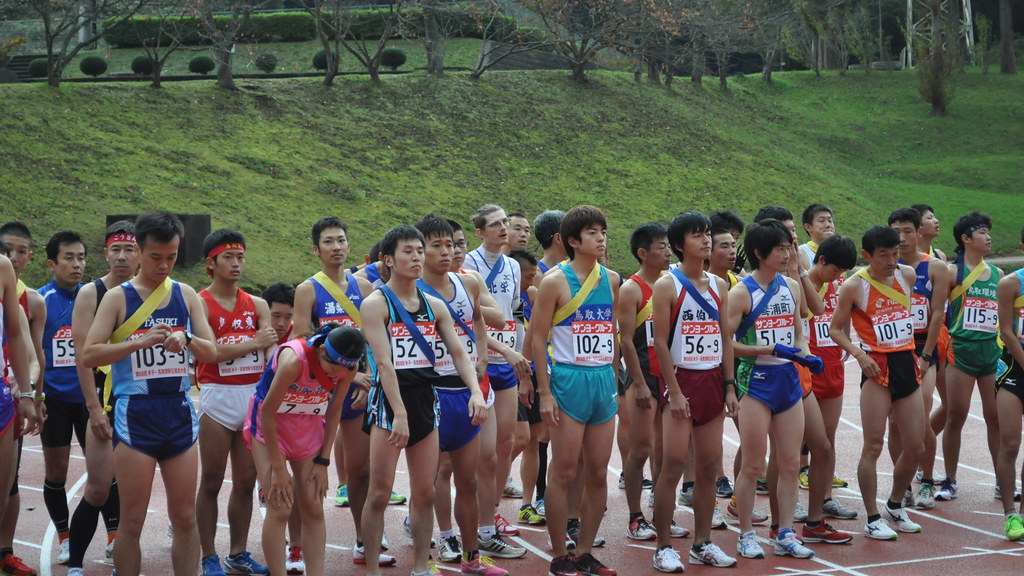 This year I've got the honor to be the first runner of the second day. This is an honor because there are only 2 starts as a group all together and typically good runners take these relays (not necessary the best though) ... 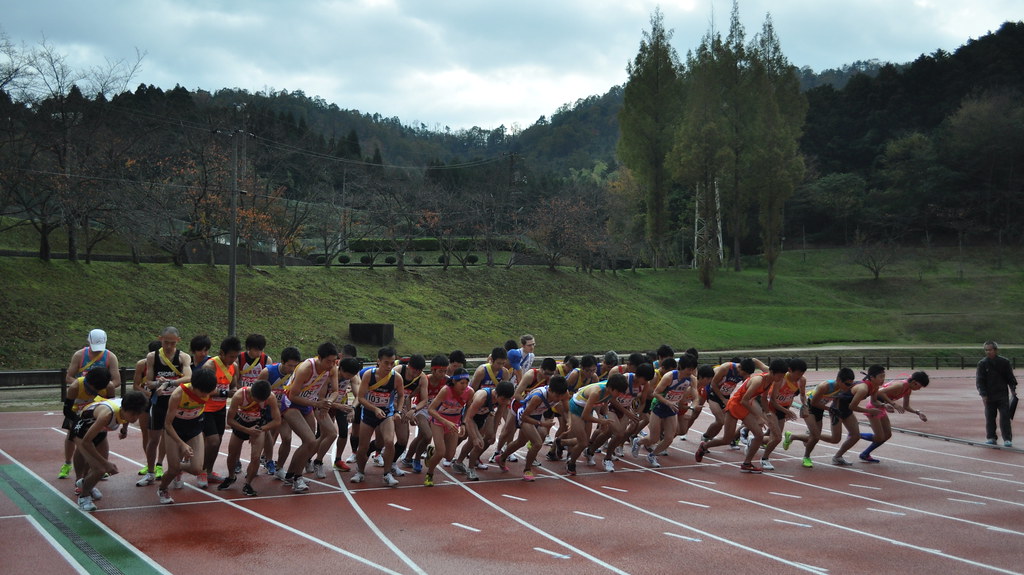 So yeah, I had a bit of pressure. I know I am not that fast so taking a start with some guys who can run a 10k in 31 minutes (for the best ones) is a bit of a challenge. It is also meaning I will be the first to make my team late... booh...

When you run a 10k or a marathon for yourself, you have your own objective and nothing else to care. If you're in a bad day it matters only to you. In an ekiden by definition you are running for the team and therefore you have to give your best whatever is your condition, you can't give up or slow down to rest a bit. That makes the run quite different as you are always thinking about your teammate waiting for you. If you watch an ekiden on TV or youtube you will see the runners collapsing at the end of their relay. At first I thought the guys/girls were a bit melodramatic in their behavior, now I know they are not.

This Ku is 8.5km long, starting from Kurayoshi track to finish at the lake Togo. The course is mainly flat but with a good climb at the 5th kilometer. 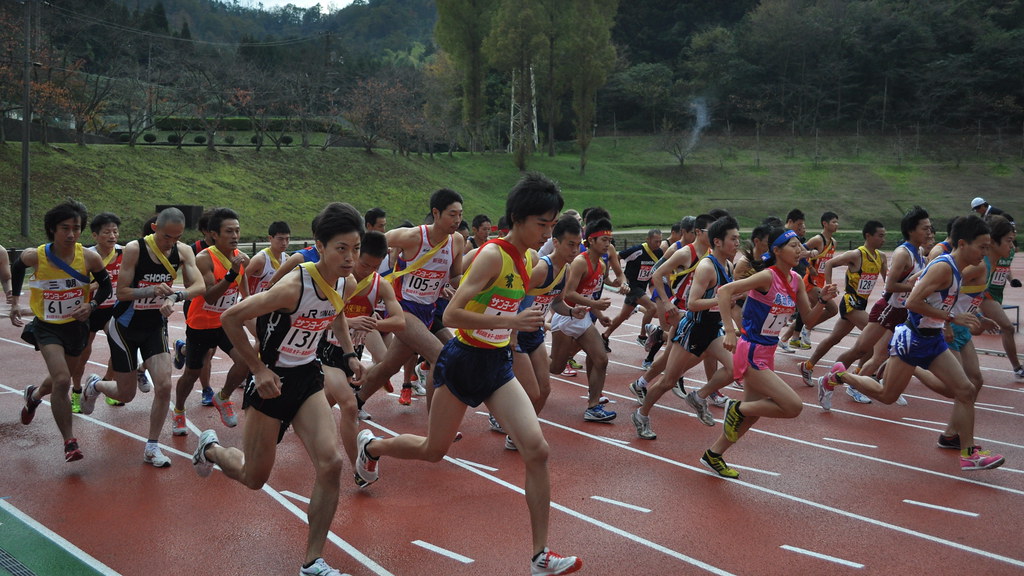 Without surprise start was fast, especially as there is a short downhill. I decided obviously to not try to follow the pack as I would have burned out after 3k or less...

So I went at my pace, my goal being an average of 4 minutes by kilometers (15kph).

But even being conservative my first km was done in 3:42 and the second one in 3:46 : faster than what I am used to do even during my interval trainings...

I was recording the run on my iphone with runkeeper as usual but did not listen to the regular voice notifications, so I was just following my feelings without knowing anything about my pace.

It turned out that from kilometer 2, I ran at a more normal pace 4'/k (or a bit less). During the climb I managed to catch a couple of runners who were maybe paying a too fast start.

I tried to push a bit in the downhill and then there was 2k to the end, that's when rain started, a hard one. I was really happy to pass the relay to my teammate and I felt bad for him and the next ones as a the weather got really bad. Just after passing the relay I collapsed on the ground and it took me a good minute or 2 to be able to stand up despite being under the heavy rain, I really gave it all.

Then I checked my time on runkeeper and was happy as I reached my humble goal. Official time confirmed it, 33:34 for 8.5k and so 3'57"/km. Runkeeper alert came on the phone also : "you achieved new personal records for running activities:Average pace". (Yeah :-) Indeed that's my fastest run since I started to train again 3 years ago and using runkeeper app. Honestly I never thought it would take me so much time to reach that again, 10 years ago this pace was just something really average for me...Someone is getting older...

Checking all the runners pace for the 8.5km :

I told you that was fast. I mean there's only about 600000 persons living in the Tottori prefecture. And last year winner, Yonago high-school team was missing this year.

Funny thing is that my team finished overall also at the 45th position. Better than last year when we finished 51th...

Our A team did great with a 8th overall position and second in the City/Town category just 30 seconds from the 1st town! Average pace of the fastest team :

To join the A team I would need to run about 12-15 sec. faster each kilometer at least...Better to start to train right now ><; 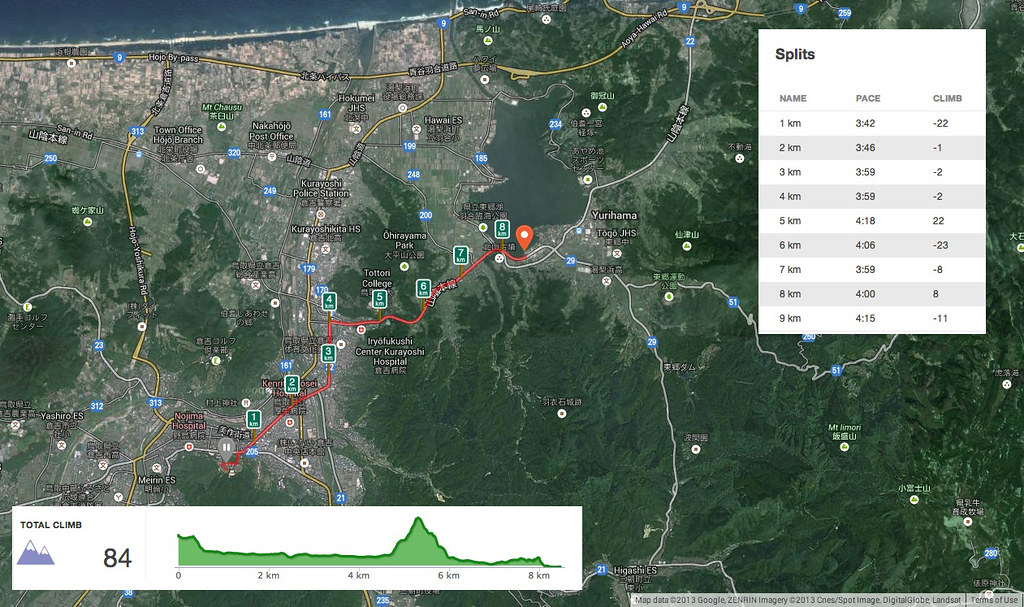 Now my next and last challenge of the year is the half-marathon of Shodoshima, an island at the South-East of Okayama prefecture in the Shikoku. Not so secret objective is 1h30' for the 21,1km... That's not impossible but I'll have to have a good day to reach it. (I was supposed to run an other half-marathon on the 3rd of November but I got sick 2 days before and so "Did Not Start"...).