This is a post for my friends of Hac Triathlon ( www.hactriathlon.com) in Le Havre, France.

Okay...So, since I've been living in Japan, I did not do anymore competitions but I still keep training when I can/want.
That's meaning : in the early morning before to go work or during the Week-end. Yes it's not so much, (that's why I don't do competitions for now) but I just enjoy the training to keep fit and maybe one day I will have more time to really train and race again.

So how are my trainings ?

Well for the swim part, I am quite lucky, I have a pool just 10mn by bike from my appartment. It's a 25m one and there's no problem to swim because in Japan, people go the pool to swim and not to do "splash" in the bath as it is in France during public opened hours.
So we have lines to swim and these lines have rules! Some lines are for free style but no add-ons are allowed : no pull-buoy no hand stuff, nothing, pure free style.
Other lines we can use the add-ons but these lines are one way only!! When you reached the other side you must switch to the next line to come back!...I only use this line to do some legs exercices, switching lines been quickly boring.
And finally you have a line to walk!!...yes the pool is always about 1m40 deep! never seen that in France. Quite good for people who need to fix an injure, good idea I think.
So I am always swimming in the free style line which is good for me, as I tented to over use the pull-buoy before.

As for the running...well just wear my Mizuno's (yes I am in Japan...I buy local stuff!...and it's cheaper than in France) and usually go for a run near the Yokohama FC stadium (10mn from home) when I want to do short (40mn for ex).
If I want to do more I go to Minato Mirai (The Port of Future) to see the sea!... I don't do anymore track trainings just some little fartlek from time to time. 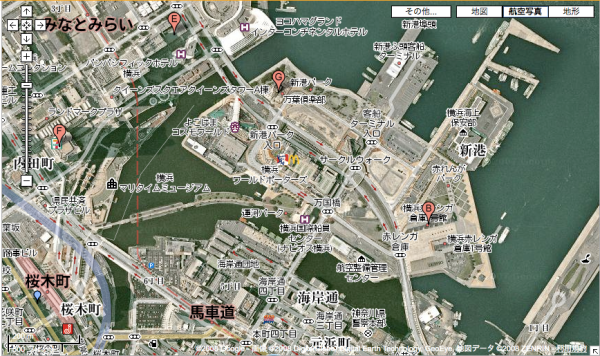 For the bike... now it's a problem... In Normandy I used to ride hours without a light....a far dream...Here the lights are every 200m...So few possibilities to train "properly" here :

- Very early in the morning, in Yokohama Minato Mirai a lap of 3/4 km to do over and over before the traffic becomes too dangerous. When I say early it's 5/5h30...hum...

- The sunday in the port near Tokyo, a closed route for cyclists, but I need to carry my bike by train 20mn to reach the place...

- Home trainer at home...I don't have one and don't want one for now...no room in the appartment for that.

- During the Week End, wake up very early and take the bike by train to the mountain (about one hour), it worses it cause the mountain is wonderful...but it supposed quite a logistic...just for a training...
(Some guys do all by bike from Tokyo, but it's meaning very long distance trainings (150km at least)...definitely not for me.

So that's a glimpse of my sport's life here in Japan. I forgot few things I will talk more in next posts, I joined a club : Nichi Futsu Cycling Club Peugeot Calyon (Nichi futsu = french-japanese), I completed the Tokyo Marathon 2008 in february (my first one) and I bought a Trek Madone 5.9 SL hehe!!

<-Geeky introduction to the blog!   One day in Hakone->