I've spotted some posters for the next Tokyo Marathon in 2009! 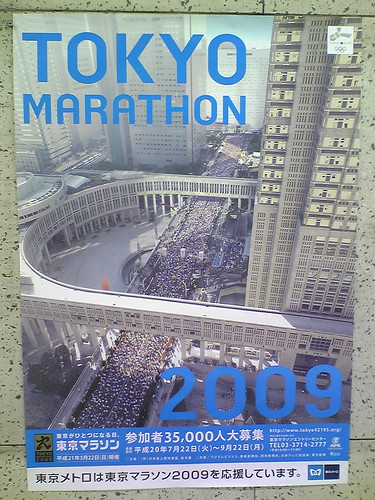 This time it will be little bit later in the year (22 of March) compared to previous ones. Makes me remember that this year was my first marathon experience, so I am thinking I should write about it before the next one!...

So the first step is the registration : there are "only" 30000 entries and about 5 times more applicants!...So you need to be lucky at first. I registered in August 2007 and received a negative answer something like in October... and then one month later received at my surprise a positive one!

First I thought, okay I have 3 months to prepare. And then the time spent and one month before still did not start training! So my training for my first marathon can be resumed to : 3 or 4 footings of 50mn + one of 1h15 and one of 1h50, last one two weeks before the race : that's all...really : please never do that...
But still for some reasons I thought I could finished it in less than 3h45mn. I was in good shape and have some experience with triathlons. My goal was just to finish it and enjoy a loooooong footing in the avenues of Tokyo.

The condition for the race were perfect : a beautiful dry winter day of Tokyo.
I decided to wear long sleeves and long pants as the temperature was quite low in the shade of the buildings. One other good thing : the race is pan-cake flat with only two bridges at the end.

For this race I used my Mizuno runnings I bought 3 weeks before and ran 3 times with them. (And kept my mobile phone to tell my co-worker and girlfriend my progress every 10km!...geek inside...). I took also some powerbar gel with me (the food and drinks provided by organization was more than enough).

So the plan was simple : jogging pace all the way! I was quite well positioned at the start and cross the start line 2mn only after the official "Bang". I did not have to walk and could jog quite quickly. I was not really stressed and enjoyed the mood to be among thousands of runners... and much more supporters all the way! That was incredible the number of people supporting us with their "Gambare", "Gambate kudasai" or "Fight" (yes "fight" said "fighto"...was quite surprise with this one). It was really helpful and entertaining!

After 8kms I stopped 2mn for a little pee (the queue to toilet was too long before the start). I checked my time, was ok at about 5mn/km.
I kept this rythm until the 30km without any difficulties. But then the lack of training started to show up!...The last 10km were "ran" at a ridiculous 6mn/km and was quite hard struggling against cramps.

Here is my beautiful diploma with each 5km log time: 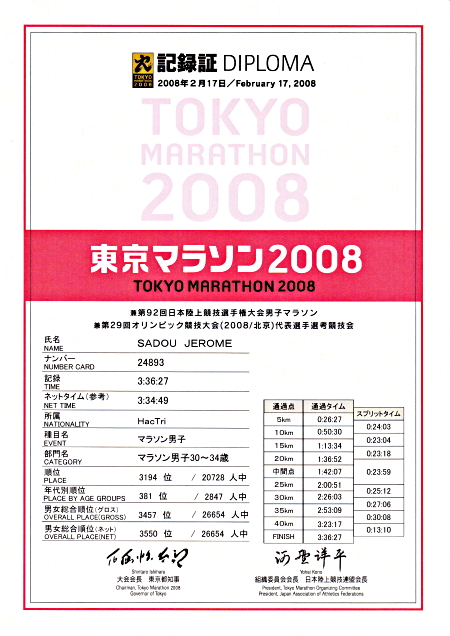 Of course after the race walking was painful during 3 days but after 10 days I was like before (I did blood test) except I lost a toe nail (due to a blister) which took 3 months to grow back!(I have pictures but you don't want to see that...)

So I was really happy with this time considering the (no) training. Of course it is a slow time compared to my ironman finisher friends from HAC Triathlon (Adrien qualified for Hawaii!) or NFCC ironman David (first ironman in less than 10h) who ran faster during their marathon part of a triathlon... But well that day I was quite happy with it, and it gave me motivation for the next one..but next time I want to train for it and target a 20mn less...3h15 seems doable.

<-A Sunday morning in Kamakura   My fixie quest (part three)->